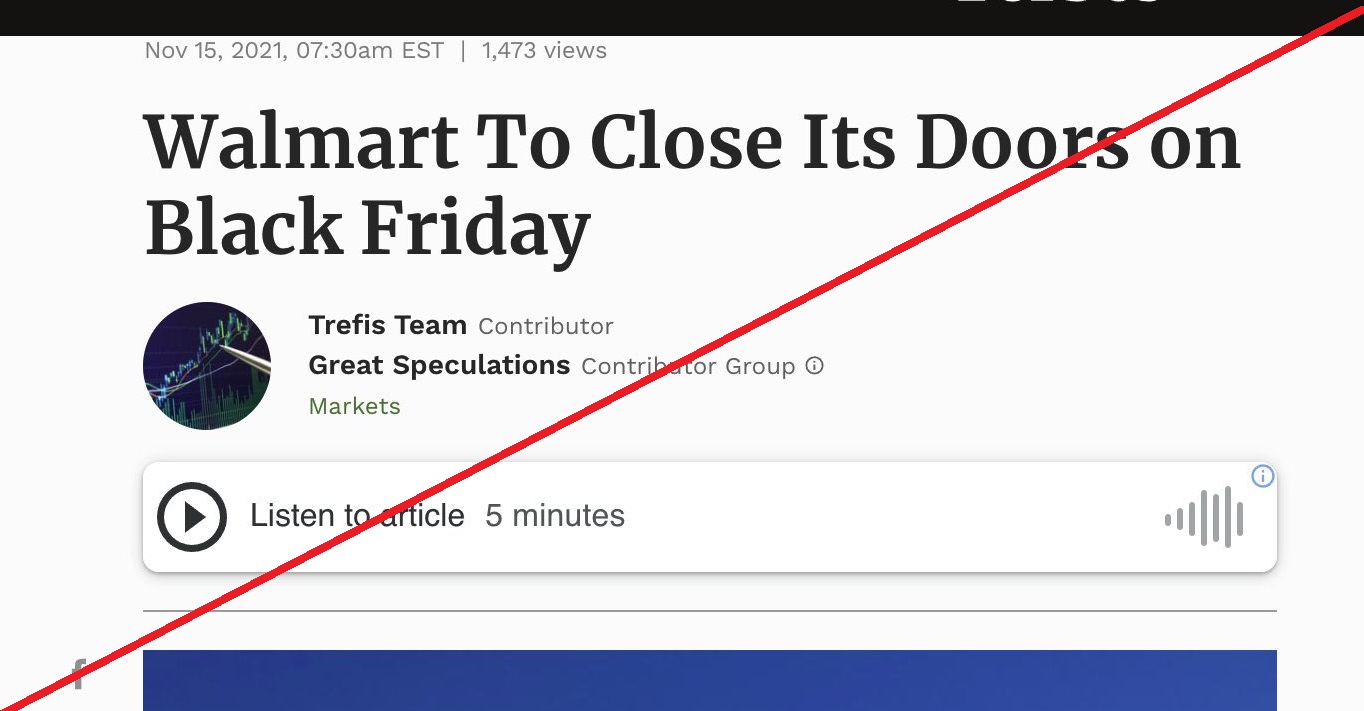 Rumor has it, Walmart – a store that sells a hell of a lot of stuff to a hell of a lot of people – is closed today. Why? Well, it's a thank you from Walmart management to Walmart staff. After all, everyone needs time off to rest and recuperate, and Black Friday has never brought the best out of people anyway. But – rumor also has it – Walmart is also out of business and has been for years. You’ll have to shop elsewhere if you want to shop at all. Why would you want to shop? Why would you want to buy things? Walmart is closed. No one here has ever heard of him. It is highly likely – nay, certain – that this Mr. Wall Mart does not even exist.

Or so those on the r/antiwork subreddit would have us believe. “This guy is doing the lord's work,” wrote u/thenewyorkgod, sharing an apparent screenshot of a Forbes article reading: “Walmart To Close Its Doors on Black Friday.”

“I’m starting a misinformation campaign to convince people that Walmart is closed on Black Friday,” the caption reads. “That way the people who work at Walmart will have a less stressful day. Join me in the fight to spread positive misinformation.” The post closed with the hashtag #WalmartIsClosedOnBlackFriday.

The above image is not a screenshot at all (surprise, surprise) but a doctored image. Search the Forbes website for this supposed headline and you’ll find nothing. Walmart is not closed on Black Friday. Walmart –  a store that sells a hell of a lot of stuff to a hell of a lot of people – is open on Black Friday. If you are so inclined, you can go there to fill your shopping cart with deals.

Black Friday is a day on which retailers discount their products. It takes place on the day after Thanksgiving – which has less of a commercial element to it – and has been around in the U.S. for decades.

Of course, Black Friday has morphed in recent years. What was once just a single day of discounts is now often a weekend and sometimes a month. Over the years, as the sales events have become more lucrative and more frenzied, Black Friday injuries and fatalities have occurred. In 2008, a mob of shoppers trampled a Walmart worker to death. There is even a website that counts these reported injuries. As a holiday, Black Friday has attracted boycotts from independent retailers who say that it makes competition with larger stores much more difficult, as well as protests from climate activists who argue that its celebration of consumerism causes ecological disaster.

On November 16, internet troll Ben Palmer posted the fake Forbes headline and a TikTok in which he – posing as a reporter – spoke to the director of corporate communications at Walmart, repeatedly asking the director if he could confirm that Walmart was closed on Black Friday.

The video was a massive hit. As of today – Black Friday – it has more than 1.3 million views.

I initially encountered the post on Reddit, where it took off on r/antiwork – a subreddit that features anecdotes of asshole managers and screenshots of people quitting their jobs. At a time where people are apparently resigning from their jobs in droves, r/antiwork’s growth to over a million subscribers has hit headlines. As media outlets love that thing known as timeliness; they have reported on r/antiwork here, here, and here.

Its users want to boycott big companies that they deem to be bad. These vary by user but include such as Amazon, McDonald’s, and – you guessed it – Walmart. Unsurprisingly, the subreddit lapped up Palmer’s attempt at a misinformation campaign. The post got over 60k upvotes and 1,148 comments.

But although the posts had reach, it seems that Palmer’s campaign hasn’t been exactly successful. The vast, vast majority of posts about Walmart being closed on Black Friday were people either viewing Palmer’s content or talking about the misinformation campaign. The few posts that attempted to spread the campaign parallel to Palmer's video had very little reach.

There are only 260 mentions of the #WalmartIsClosedOnBlackFriday hashtag on Twitter. On TikTok, the hashtag he started has three total videos, and nearly all of the 1.3 million hashtag views come from his original prank video. On Facebook, there were nearly 22k impressions of the hashtag, but again nearly all of them came from Palmer’s page. That means that nearly everyone who saw this campaign would have been aware it was a joke.

But it's not exactly disinformation if you announce your intentions beforehand —  his channel is called Palmer Trolls after all. Instead, this falls into the same category as telling your kid you’ve got their nose. You don’t have your kid’s nose. You know that you don’t have your kid’s nose. Your kid knows you don’t have their nose. It’s an untrue thing said in jest – hardly a disinformation campaign. It would perhaps become misinformation if another nearby child failed to see the whole nose-snatching, only heard a portion of the exchange, and reported to their fellow playmates that someone was taking noses. But that appears not to have happened here, either. We were all in on the joke. Walmart is open on Black Friday. Go buy a big TV.

As coronavirus continues to spread around the world, with infections currently reported in 167 countries, the virus is being increasingly politicized—and with the 2020 U.S. election now in full swing, there’s good reason to believe this is only...

Baba Vanga, who was born in 1911 and died in 1996, was hailed as the “Balkan Nostradamus” and rose to great popularity in Bulgaria and Russia. Petrov claimed that Vanga had left a secret prediction about an unknown virus that would spread around...