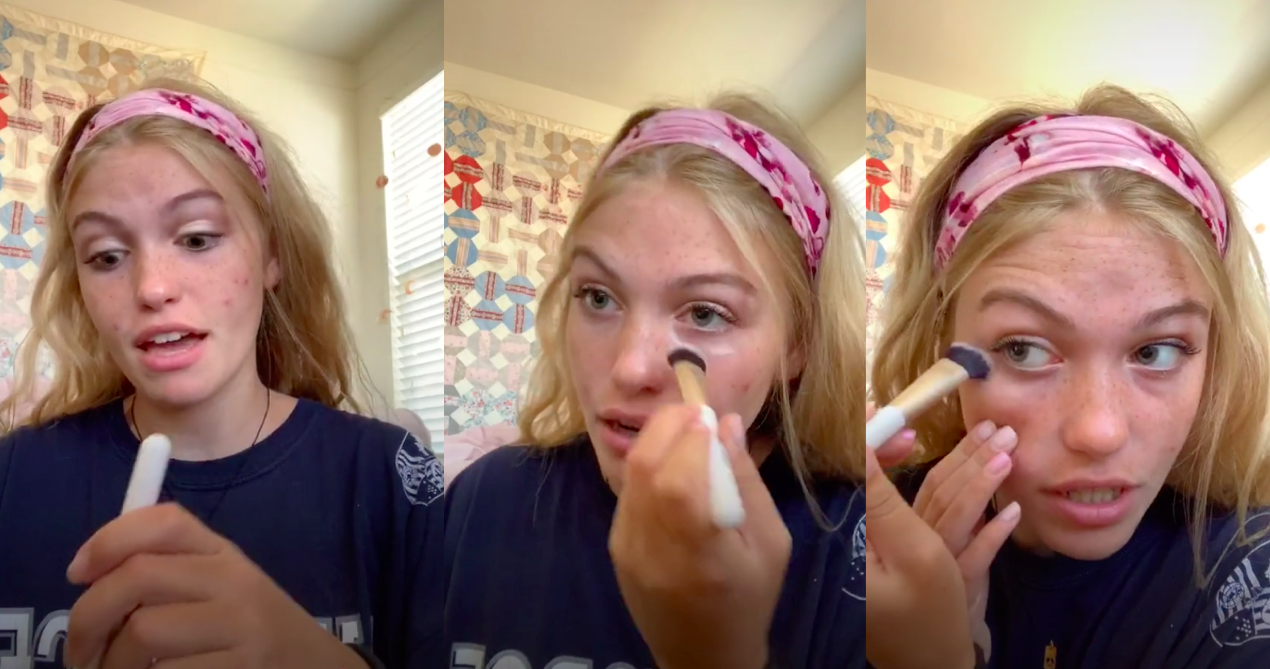 The content that goes viral on TikTok seems to be getting ever more abstract: on August 23rd, 16 year old Gracie Cunningham posted a video asking various questions about the validity of the entire pursuit of mathematics. Gracie begins “I was just doing my make up for work and I wanted to tell you guys about how I don’t think math is real.” The original post garnered over a million views, but things really exploded when the video was posted to Twitter, where according to the website Know Your Meme, the repost received more than 13 million views, 111,000 likes and 42,000 retweets in less than a week.

gracie (@gracie.ham) has created a short video on TikTok with music original sound. | this video makes sense in my head but like WHY DID WE CREATE THIS STUFF

Gracie’s commentary, including the wonderful line about the ancient Greek mathematician Pythagoras “he didn’t even have plumbing, and he was like, ‘lemme worry about y=mx+b!’” generated a huge amount of debate, about math, then about gender and who gets taken seriously on social media. While the video was originally mocked, lots of scientists and mathematicians leapt to her defence, and Gracie eventually posted a follow up video, clarifying her questions and reacting to her viral fame.

None of this helped us get to the bottom of the original conundrum however: is math real? We tracked down an expert to help us: Enter Dr Rob Knowles, a specialist in the philosophy of mathematics.

Hi Rob! Thanks for agreeing to help us out. What did you think of Gracie’s videos?

She raises some interesting philosophical issues about mathematics. It’s a shame some people responded negatively. I suppose that confirms my suspicion that Twicker or Tockbook or whatever isn’t a good place for philosophical discussion.

From my limited experience with it, social media seems to be a place that expects you to have already made up your mind about things.

How did people “come up with the concept of algebra”? What did they need it for?

It’s easier to answer these in reverse order. Algebra is used to find unknown quantities, and people have always needed to do that. It’s useful in dividing up pieces of land, sharing out pieces of fruit, counting people, building pyramids, or whatever else people did in the past. This goes some way towards addressing the first question. Given how useful algebra is, it is no wonder people began formulating its principles systematically. The rest is history.

A small tangent, did Pythagoras “have plumbing?”

I’m not qualified to answer that question.* But, if he did, I don’t think it would have directly helped him with his math.

*[Fact-Check: the Ancient Greeks did have pretty sophisticated plumbing. Alas, there seems to be no reliable evidence on the effects of regular showering on cognitive ability - Ed.]

In her second video, Gracie asked: “How did people know what they were looking for, when they started theorising about formulas?” What’s your answer to that question?

It may help to recognise that the mathematical formulas we use today are the result of a long process. Many ideas related to elementary mathematical formulas first cropped up in relation to practical problems. (Imagine laying uniform tiles to create a pattern of three squares, arranged in such a way that they enclose a right-angled triangular space. Something like the Pythagorian theorem c2 = a2 + b2 may be useful here.) The move from these humble beginnings to the crisp formulas we use today was a long process of refinement and generalisation, involving many different people with many different aims. These include formulating mathematical statements as generally as possible, proving them within a formal language, and relating them to other areas of mathematics.

I guess I’m saying that people don’t just go looking for new formulas; they respond to the particular problems in front of them.

Gracie again: “Once they did find these formulas, how did they know that they were right? Because….how?”

Excellent question. A tempting but unsatisfactory answer is that we know mathematical statements because we prove them. Proving a mathematical statement involves showing that it follows logically from some other mathematical statements (axioms). So the mystery is just pushed back: how do we know the axioms? Moreover, some mathematical truths are known with such certainty that the ability to confirm them is a minimum requirement for a good axiom. So, important as it is, proof isn’t the whole story. But what else could there be?

There’s a certain feeling you get when you entertain an elementary mathematical truth (like 2+2=4) and recognise it to be true. It feels like you ‘see’ its truth, in some sense. Some philosophers and mathematicians think that these feelings (or ‘intuitions’) are the bedrock of mathematical knowledge. Sounds a bit spooky to me.

Gracie’s next question was about the response to her video: “Why are the only people who are disagreeing with me the ones who are dumb and the physicists and mathematicians are agreeing with me?” What do you think?

I can’t comment on the relative intelligence of Gracie’s commentators, but I’m happy to hear that some physicists and mathematicians are taking her line of inquiry seriously. I suppose people using sophisticated mathematics are more likely to think deeply about where it all came from. When a physicist makes accurate predictions about fundamental particles by using mathematical tools designed years ago for entirely different purposes, I can imagine they might pause for thought. I imagine it’s a bit like reading an old novel and finding in it a perfect description of your bathroom.

Lots of the responses to Gracie’s questions were people defending her line of questioning, including Bill Hayes, a systems engineer who read out her exact words from the first video to show that they sound different when spoken by an older British man, compared to an American teenage girl. What do you think of these responses?

Testing a theory. I don't think the original video was dumb at all, I think when an American teenage girl says something people interpret it differently to the same words coming from a British man in his thirties. What do you think? #mathisntreal @graciegcunning https://t.co/BxCIjDifCx pic.twitter.com/DiC9VX5gyD

I wouldn’t be surprised if there were less negativity had the original video been posted by someone like Bill Hayes. But I also think that some have little patience for philosophy, and social media seems like a particularly bad venue for it. It’s a little sad that the social media response to an interesting line of questioning is to generate a polarised issue: Are you for these questions or against them? Is she dumb or not? Yes or no?

In conclusion, is math real?

There are two different questions here, depending on how we interpret ‘math’.

On the one hand, there is the activity of doing math. On the other, there is the subject matter mathematics purports to describe. It makes most sense to ask whether the latter is real, and I think this is what Gracie is getting at. Take arithmetic for example. If you ask someone what arithmetic is about, they’ll desperately cast around for some loose objects and clump them together to demonstrate that, say, two pencils and two mugs make four pencils-or-mugs. The idea is that the truths of arithmetic are generalisations about particular objects.

But it’s a truth of arithmetic that there are infinitely many prime numbers. What does that have to do with pencils and mugs? I think that mathematical theories describe a domain of special objects that have all and only the properties that the theories ascribe to them. I don’t think these objects really exist; I think they are useful fictions. So, I’d have to agree with Gracie: math isn’t real.

Math: fact checked! Philosophers: bothered! Rude twitter users: vanquished! Teenage girls: victorious! Thank you for coming on this journey with us – just another day at Logically.ai.