Double Check: Is Bill Gates Building a Machine To Block Out the Sun? 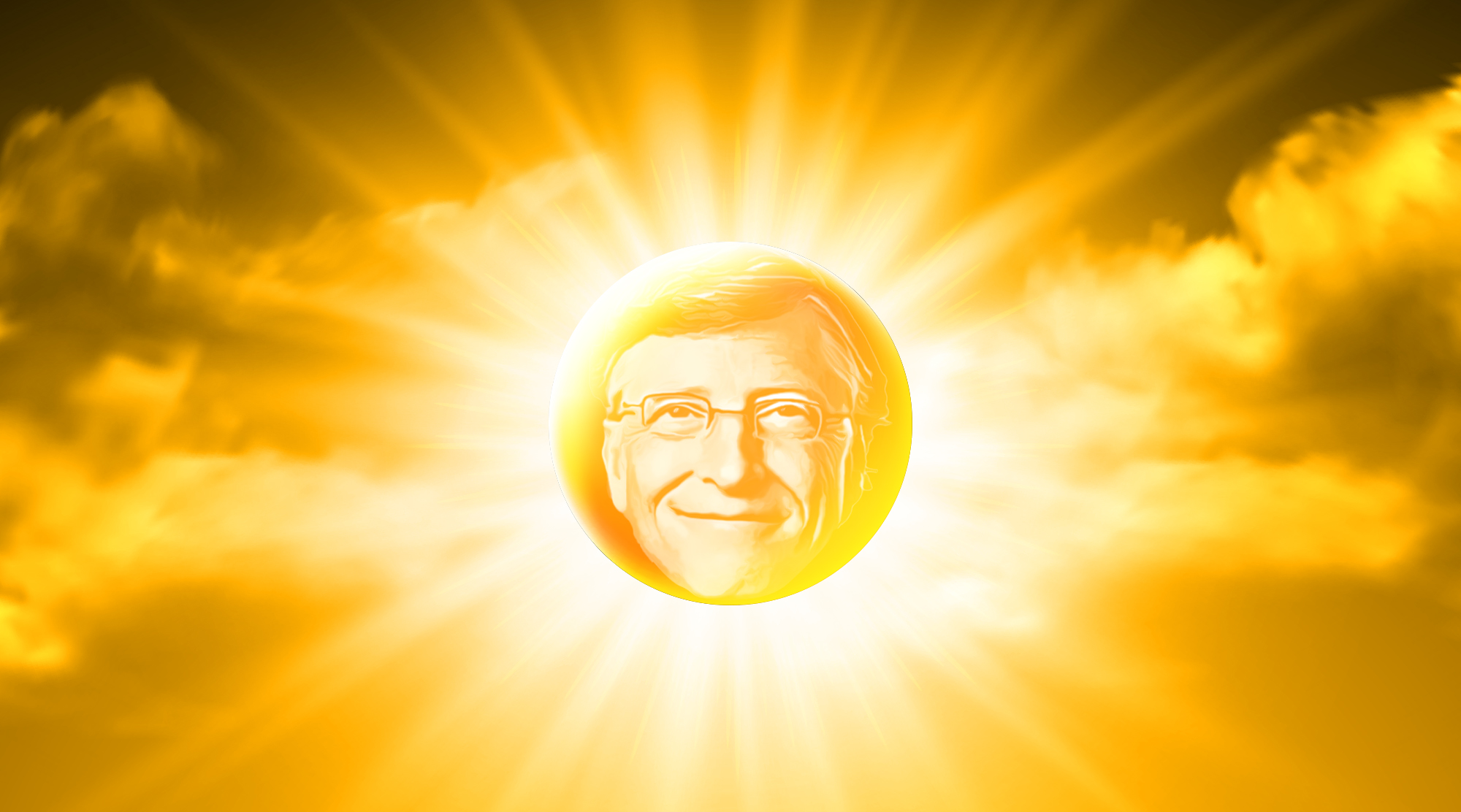 On February 20, RapTV tweeted that Bill Gates is planning to spray dust towards the sun in an effort to fight climate change.

As you can imagine, this has raised a lot of questions, not least because the rumor brings to mind plot lines from both The Simpsons and environmental dystopian epic Snowpiercer. Neither of these scenarios would be ideal. In the latter, world leaders’ plans to “dim” the sun result in the destruction of all natural life on Planet Earth, with what's left of humanity fighting for survival on a speeding train.

RapTV’s tweet was referring to the Stratospheric Controlled Perturbation Experiment, otherwise known as SCoPEx, which has in fact been in the public domain for some time. It is intended to have a “global cooling effect” across the planet. Bill Gates has said that he believes that technology and entrepreneurship can see us out of the climate crisis, but Gates is not its main donor.

The $20 million venture was founded by Harvard University’s Keutsch Group, which received its first round of funding in October 2017. The project is backed by a mixture of philanthropic organizations and entrepreneurs, including Keith David (who has been the most vocal supporter of the project), former Google VP Alan Eustace, the Open Philanthropy Project, the William and Flora Hewlett Foundation, and the Pritzker Innovation Fund. Gates’ funding contributes to around 40 percent of the project.

Simply put, the idea behind SCoPEx is to spray dust particles into the stratosphere, allowing them to cool the planet as the sun’s rays are reflected back into space. It is unlikely that the project will manifest as a Mr. Burns-style effort to block out the sun but it’s nonetheless eye-opening. SCoPEx is in a series of field experiments. The first step involves spraying water molecules towards the sun. If this goes according to plan, scientists then intend to replicate this with limestone or calcium carbonate, followed by sulfites.

An article in Nature.com explains that the proposals are based on the cooling effects of sulfur released by volcanoes. In 1991, Mount Pinatubo erupted in the Philippines, scattering an estimated 20 million tonnes of sulfur dioxide into the stratosphere. “The eruption created a haze of sulfate particles that cooled the planet by around 0.5 °C. For about 18 months, Earth’s average temperature returned to what it was before the arrival of the steam engine,” notes Nature’s Jeff Tollefson.

In December 2020, the Keutsch Group announced the first stage of the experiment. In partnership with the Swedish Space Corporation, scientists will fly a device very similar to a hot air balloon out of the Esrange Space Center in Kiruna, Sweden. The group says that once it is in place, a “very small amount of material” (100 g to 2 kg) will be released to create a perturbed air mass standing at roughly one-kilometer-long and one hundred meters in diameter.

Scientists will then measure “resulting changes in perturbed air mass, aerosol density, atmospheric chemistry and light scattering.” They note that the aim of the experiment is to help the group learn about the efficacy and risks of solar geoengineering and its effects on the ozone. This is likely to take place in June 2021.

It’s not the first time such an experiment has been attempted.  But, unsurprisingly, geoengineering is deeply controversial. Previous efforts have been abandoned following pressure from activists and NGOs. In 2012, news broke that Harvard’s David Keith and James Anderson were attempting a geoengineering experiment in Mexico. Much like the project in Sweden, scientists planned on sending a balloon several thousand feet into the atmosphere while spraying sun-reflecting chemical particles to cool the planet.

The Etc. Group expressed fears about the “social and geopolitical impacts” of SCoPEx and argued that if ScoPEx goes forward, it could give the green light to ever more ambitious geoengineering experiments.

“If deployed at scale, SRM could disrupt the monsoons in Asia and cause droughts in Africa, affecting the food and water supplies of two billion people.”

Harvard’s David Keith and Gernot Wagner denied that they were planning to deploy geoengineering on any mass scale, and insisted they were taking due diligence. In an opinion piece for the Guardian, they said that: “Fear of solar geoengineering is justified [but] the emphasis here is on study. It would be reckless to deploy solar geoengineering based on limited research.” They went on to state that ending support for fossil fuels would be insufficient in ending climate change as “it just stops the risks of atmospheric carbon.”

The group also rejected implications that the project was tied up with Donald Trump, whose administration had shown support for geoengineering while rolling in several damaging climate policies., including withdrawing from the Paris Agreement and scrapping the Clean Power Plan. Keith wrote in the Guardian: “…if Trump were to push solar geoengineering while gutting climate science, we believe the only appropriate response is active resistance.”

The Keutsch Group is keen to emphasize that the project is an experiment, rather than a test. The distinction is essential, it says, as it aims to improve knowledge of the stratosphere, rather than see if the project works as designed. “We are not testing whether it’s possible to scatter sunlight back to space, because there is no meaningful scientific uncertainty about this question.”

Leaving aside the potential environmental impact, there are concerns over whether entrepreneurs should be involved in science at all.

In December 2020, environmental NGO SilverLining told the SCopEX advisory committee that outside influences pose a risk to objectivity and public trust: “Non-scientific influences should not influence scientific practice, research findings, or recommendations. Such interference introduces the potential for unjust influence, poses risks to decision-making and undermines public trust,” they said in a statement.

The program has already led to fallout. In August 2020, Dr. Louise Bedsworth, director of the California Strategic Growth Council, resigned from her voluntary post on SCopEX’s board. Bedsworth was scrutinized by climate groups for failing to distinguish from her government role and her duties as a state employee. Bedsworth described her involvement as “a personal mistake” that had “cast a shadow” over her research. She called for strong governance on the project given the “associated risks of this type of research.”

Bill Gates, then, who has been at the center of a growing number of conspiracy theories over the pandemic, is not planning to “block the sun”. But as the Keutsch Group itself has admitted, there are legitimate risks and uncertainties attached to geoengineering. Concerns about an imminent, Gate-sponsored ice-age apocalypse are unwarranted, but valid questions around the project and its impact on our climate should not be dismissed.

Baba Vanga, who was born in 1911 and died in 1996, was hailed as the “Balkan Nostradamus” and rose to great popularity in Bulgaria and Russia. Petrov claimed that Vanga had left a secret prediction about an unknown virus that would spread around the...

AI Biases and the Global South

In late March, Professor Nida Kirmani, a feminist sociologist and professor at Lahore University of Management Sciences in Pakistan logged on to Twitter as usual. She quickly realized something was awry: other accounts with her name were now gaining...