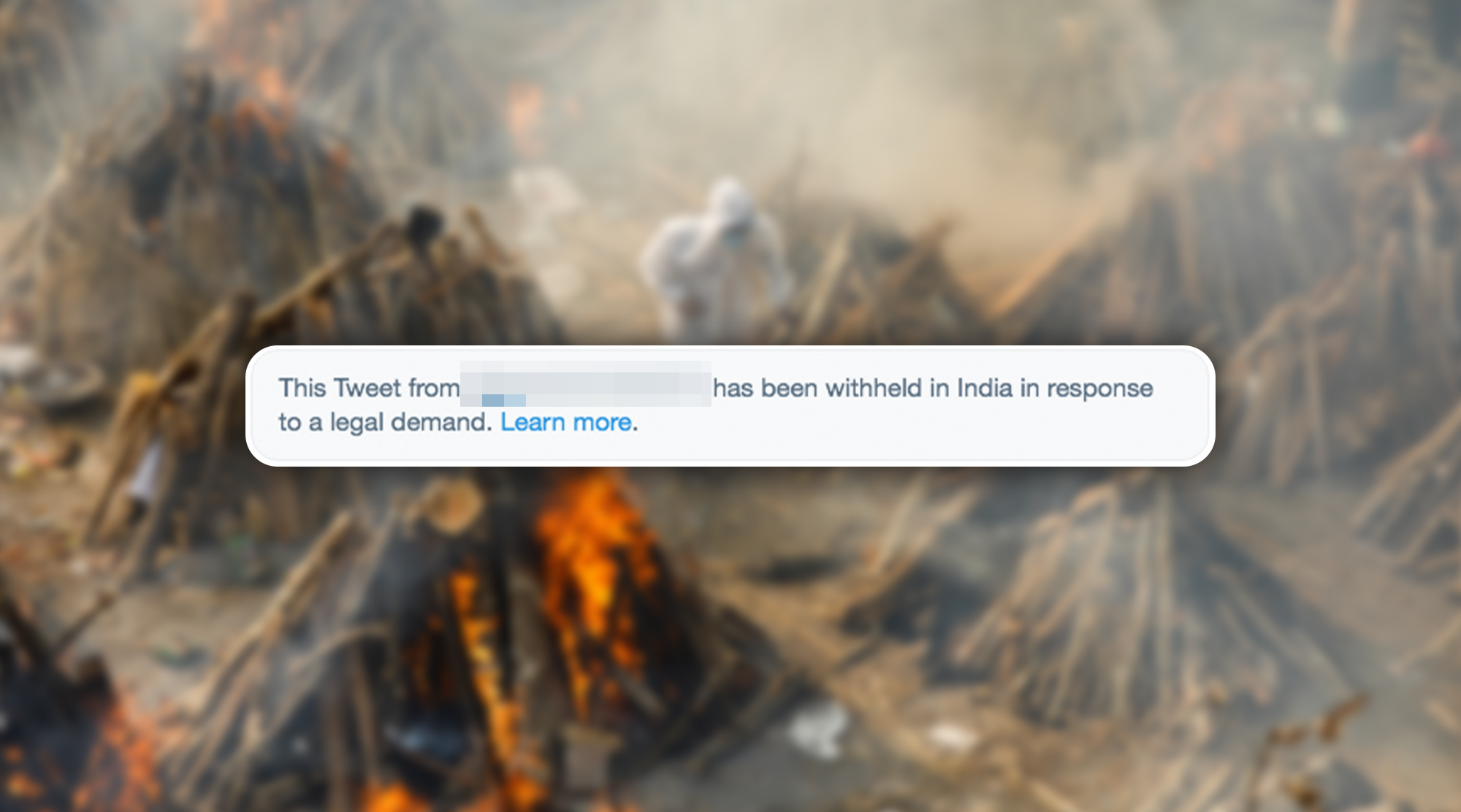 As India’s second wave of COVID-19 has the country reporting higher cases than any other country at any stage during the pandemic, the Indian government is clamping down on social media accounts that are critical of the administration or making urgent requests for medical supplies.

Earlier this month, Medianama reported on a Lumen Database which showed that Twitter complied with takedown requests made by the central government by censoring 52 posts that were flagged through the Ministry of Electronics and Information Technology. Most of the tweets that were removed or given restricted access were critical of the Bharatiya Janata Party-led government’s handling of the COVID-19 crisis, with no solid justification on how they breached local laws or the platform’s terms of service. 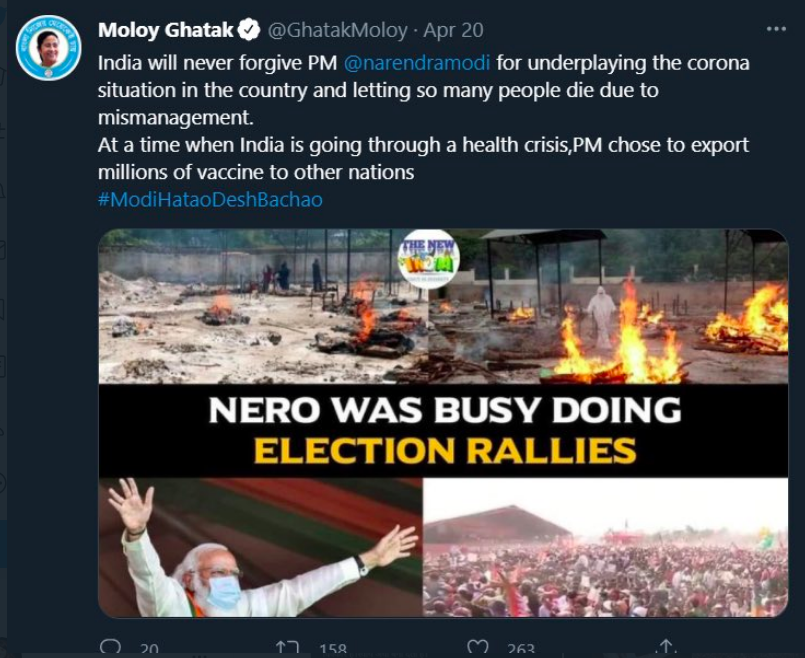 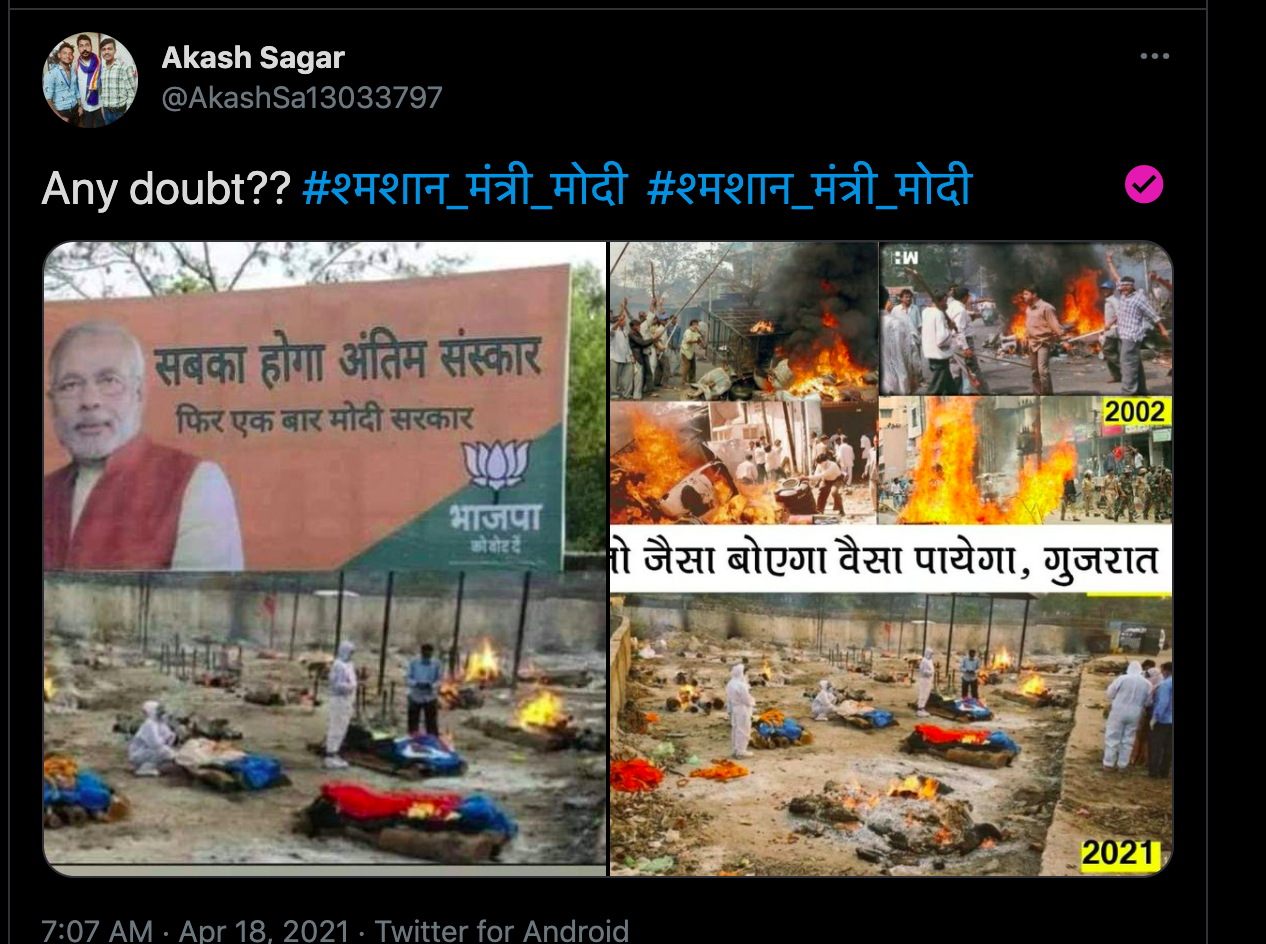 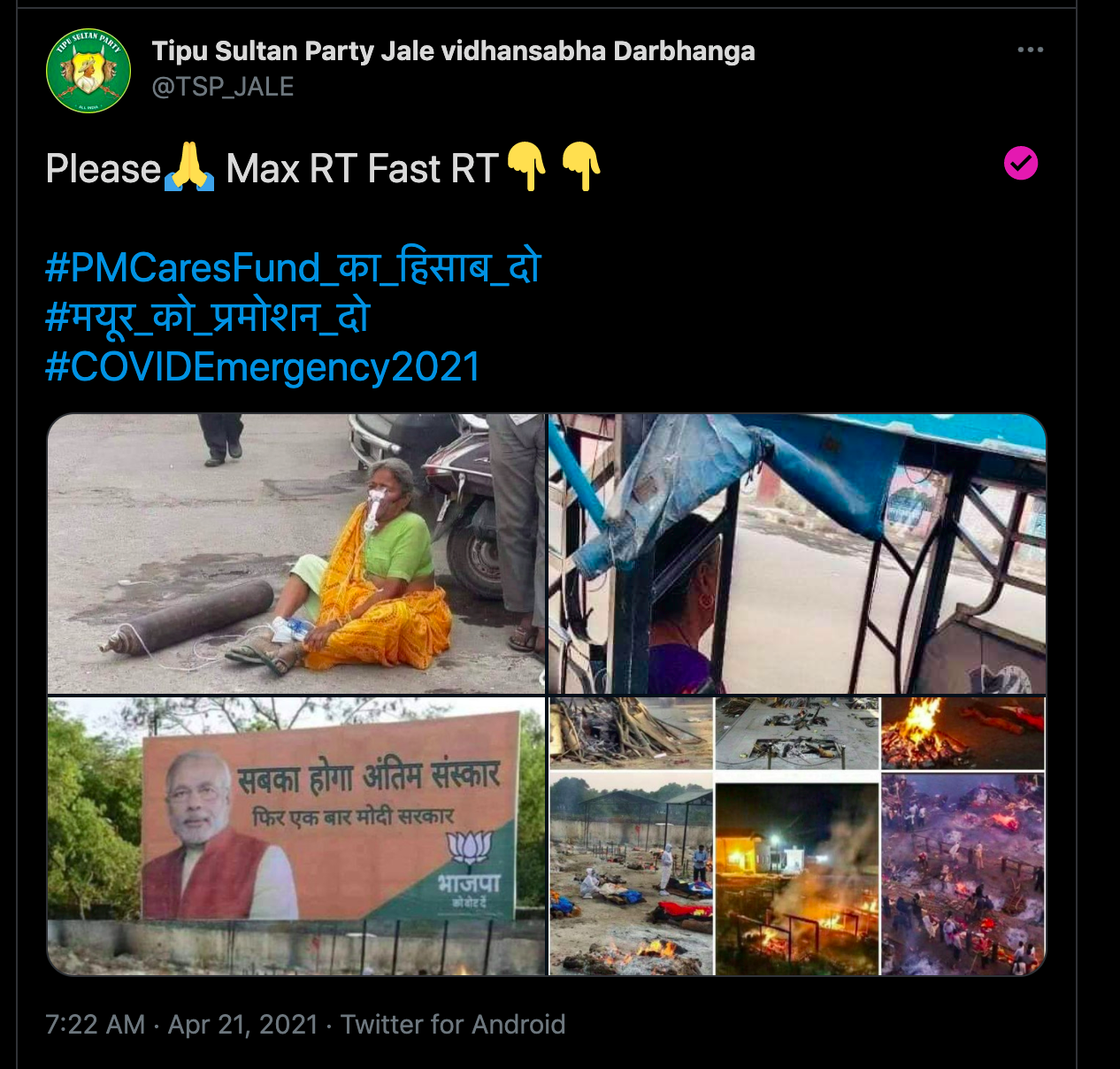 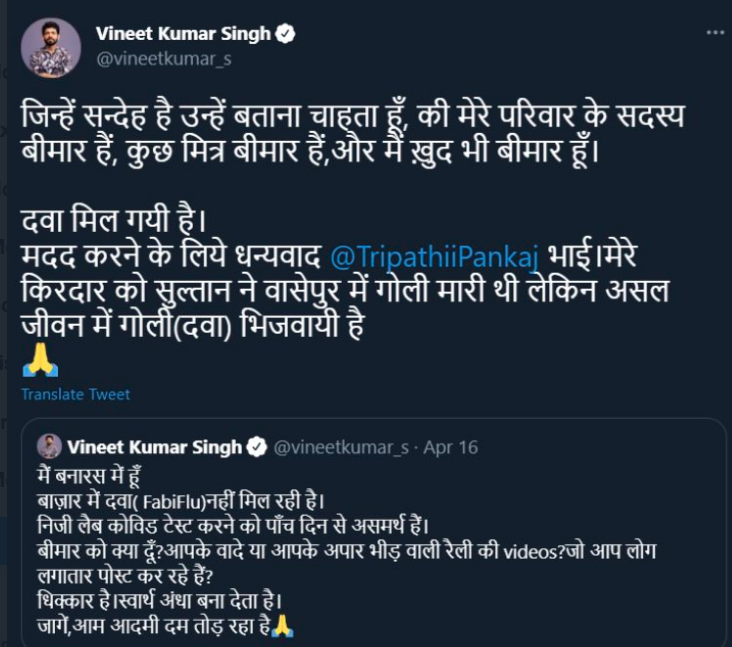 Translation: I am in Varanasi. Medications (Fabiflu) are not available in the market. Private labs are unable to take COVID-19 tests for five days. What medicines should be given to those who are ill? Your promises or videos of your crowded rallies? The ones that you constantly post. It’s shameful. Greed makes one blind. Wake up, the common man is taking their last breath.

With a current seven-day average of over 330,000 daily cases, India’s COVID-19 crisis has caught the world’s attention. Global media, international sports people and talk show hosts like Trevor Noah have shed light on the worsening situation as well as Prime Minister Narendra Modi’s lack of control over the second wave of the pandemic. While India reported an alarmingly high number of cases, campaigning by the BJP and opposition parties in the state of West Bengal continued in full swing with thousands attending political rallies flouting all social distancing norms. It was only after receiving significant criticism and days after other parties canceled their campaigning that Modi announced he was canceling his rally on April 22 — six days after cases had crossed the 200,000 mark. However, he was criticized for his virtual rally the next day in which his address was projected on a screen, hundreds of people physically attended with only minimal social distancing. Election rallies were allowed to continue with such impunity that the Madras High Court observed that the Election Commission is “singularly responsible for the second wave of COVID-19” and its officers should probably be “booked on murder charges.”

The government is also cracking down on users whose attention has pivoted to a crumbling health infrastructure that has led to COVID-19 patients scrambling for hospital beds, increasing death tolls due to a shortage of oxygen supply, and unavailability of crucial medicines like Remdesivir on the market. With a failing healthcare system, as thousands of users across the country are gathering resources to aid those in urgent need, the administration is taking action against those lending a helping hand.

The BJP-led Uttar Pradesh government recently filed an FIR against a man who sought help for procuring oxygen for his grandfather on Twitter. The police accused the man of intending to spread fear or panic amid a pandemic. Sources from the central government reportedly said it was seeking to block accounts for spreading fake news to create panic among the people — not due to criticism of its handling of the crisis. When volunteers claimed they were receiving threatening calls by people claiming to be Delhi Police officers for providing medical leads, the Quint reported that some suspect the source of the calls is the BJP’s “notorious IT cell.”

What are the laws?

Although the government claims the crackdown on certain tweets is because old images are being used to spread misinformation, its strong-handed approach on social media platforms has raised questions on the legitimacy of such takedown requests.

Twitter’s policy stipulates upon receiving a legal request, it reviews content under the rules of the platform and those set by the laws of the land. If the content does not violate Twitter’s rules but can be determined illegal in a particular jurisdiction, “withholdings are limited to the specific jurisdiction that has issued the valid legal demand or where the content has been found to violate local law,” its website reports.

The “local law” that Twitter classifies these posts as violating falls under the latest Information Technology (IT) Rules, 2021. Enacted in February this year, the rules put social media companies, digital media and news services under greater scrutiny. The IT Rules, 2021, expand the scope of Section 69A of the IT Act 2000, which was originally meant to govern intermediaries to digital applications. The rules now enable the state to block access to content on digital media platforms, to protect “the sovereignty and integrity of India, defence of India and security of the State."

This is not the first time such steps have been taken under Section 69A. Earlier this year, the government issued a notice of noncompliance to Twitter India when it initially refused to take down certain tweets about the ongoing farmer protests flagged by the ministry. With their employees potentially facing jail time, the defiance by Twitter did not last, with the government eventually forcing the platform to comply with 95 percent of requests that the government had made, the Print reported.

In February 2019, Jio users were reportedly unable to use certain sites which were blocked on government orders under the same section. 59 Chinese apps, including TikTok, UC Browser and Cam Scanner, were blocked under this section in June last year.

More recently, as #ResignModi started trending on Facebook with over 1.1 million impressions between April 23 to April 30, the platform temporarily hid posts calling for the prime minister’s resignation. Posts with the hashtag were “temporarily hidden” because “some content in those posts goes against our Community Standards.” When the news was widely reported Facebook clarified it had temporarily blocked the hashtag “by mistake, not because the Indian government asked us to, and have since restored it.” They said content associated with the hashtag led to the mistaken blocking. 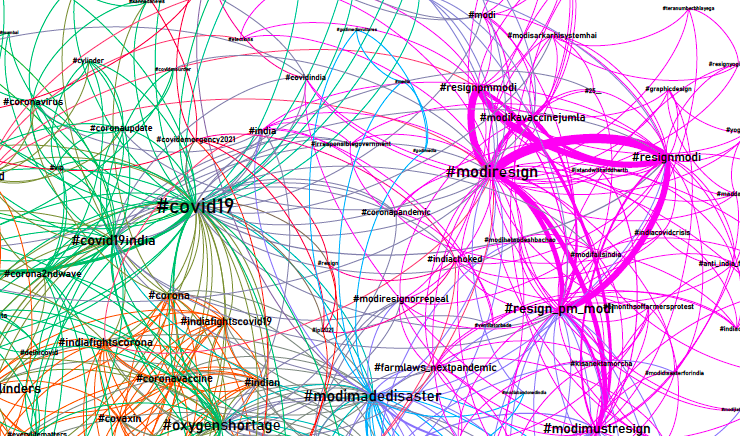 This visualization shows the overlap between traffic around India's current COVID-19 crisis, and calls for Modi to resign. This overlap is likely one source of the government's anxiety around such criticism.

The government’s focus on the conversation rather than action has been subject to wide criticism. For instance, led by Chief Minister Yogi Adityanath, the Uttar Pradesh government threatened to take action against any hospital that flags a shortage of oxygen under the National Security Act for spreading false rumours. “There is no shortage of beds, oxygen and life-saving drugs in the state,” Adityanath claimed during a virtual news conference despite several cities reporting hospitals and crematoriums are inundated with the state reporting an average of 30,000 COVID-19 infections a day. 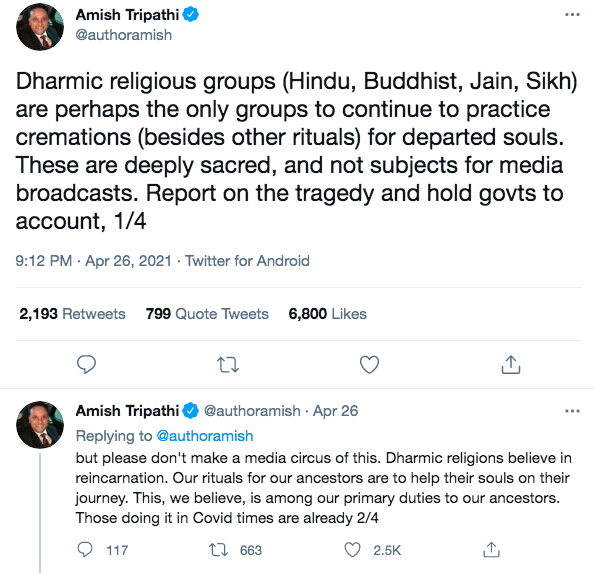 Meanwhile, pro-government accounts are building a narrative that images of mass funerals that are drawing global attention to the gravity of the situation are unethical. While these images were widely reported when India witnessed its first COVID-19 wave last year with little to no resistance, these accounts are now deeming pictures of funeral pyres “pandemic porn.” A collective of mental health professionals from state-run hospitals also wrote an open letter to the media dissuading them from using such pictures, warning against panic-inducing coverage. Additionally, the government has reportedly asked news channels to use the word “system” rather than “central government” while reporting on the pandemic.

When three SUVs rammed a group of protesters on October 3 in Uttar Pradesh – resulting in the death of four farmers, three Bharatiya Janata Party (BJP) workers, and a journalist – right-wing accounts blamed the protesters for being extremists. As...