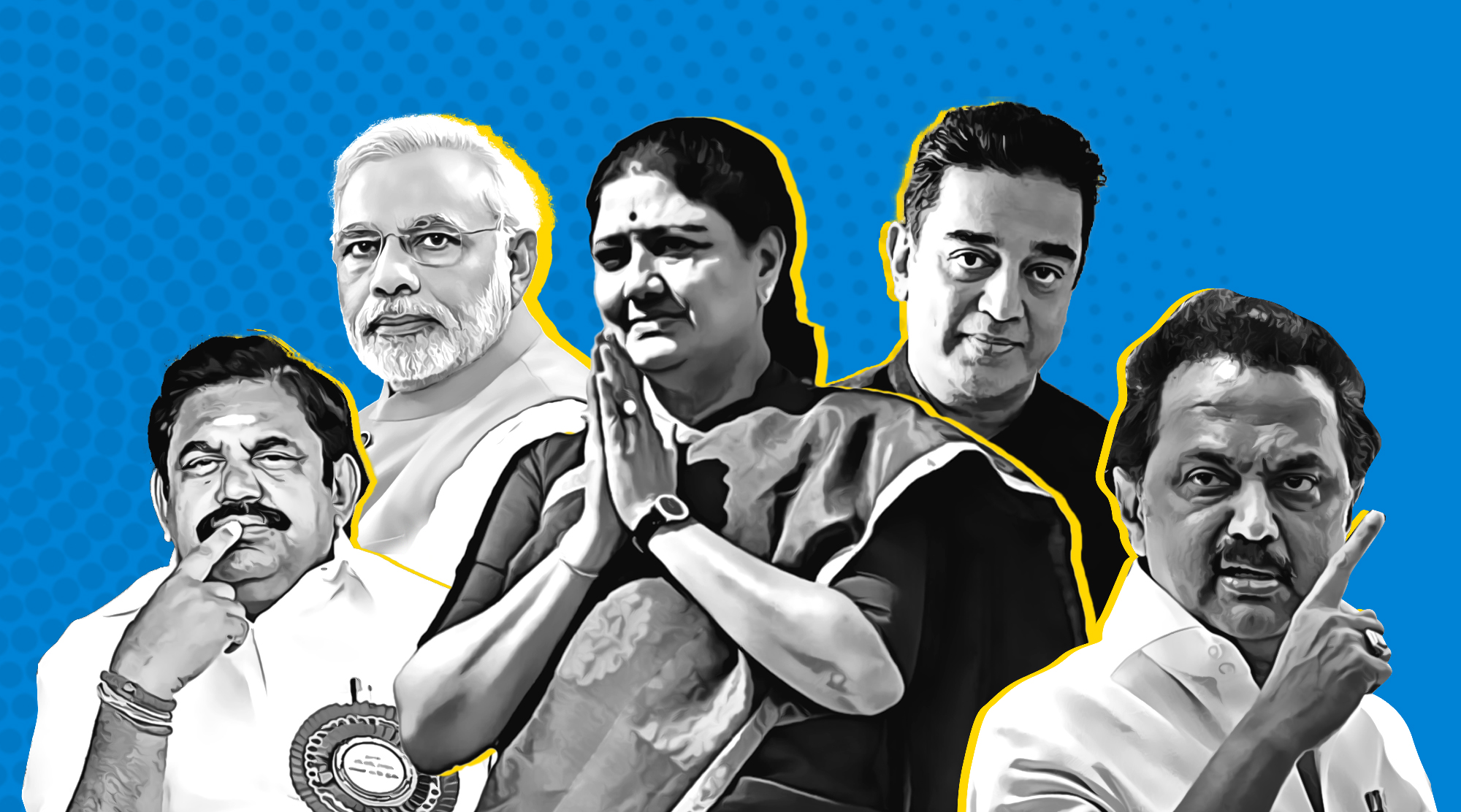 Here are a few claims pertaining to Tamil Nadu that we checked. We will be updating this section with more fact checks in the coming weeks.

TRUE: AIADMK had earlier supported CAA but is pushing to scrap it ahead of the assembly elections.

On March 14, 2021, the All India Anna Dravida Munnetra Kazhagam (AIADMK) in its election manifesto claimed the party would urge the Centre to withdraw the Citizenship Amendment Act(CAA) if elected back to power.

However, when in December 2019 the Rajya Sabha passed the Citizenship (Amendment) Act, the AIADMK had voted in favor of the law. After voting in the law's favor in the upper house, the party has changed its stance ahead of the assembly elections.

FALSE: The funds supposed to compensate for the shortfall in Tamil Nadu's GST revenue are being used to make a new parliament building.

On August 31, 2020, Chief Minister of Tamil Nadu, K. Palaniswamy, had written a letter to the Prime Minister of India, Narendra Modi, to release the compensation for the shortfall of revenue collection since April 1, 2020. Referring to the above incident, DMK’s Udhayanidhi Stalin accused Prime Minister Narendra Modi of refusing to pay Tamil Nadu's GST revenue. He claimed that the compensation was utilized for building a new parliament building.

However, on March 15, 2021, the finance ministry said it had released the entire ₹1.10 lakh crores, the estimated GST compensation shortfall to the states.

MISLEADING: Sasikala can become the chief minister of Tamil Nadu without contesting elections.

However, the right-hand woman to late former Chief Minister J Jayalalithaa, Sasikala recently announced retirement from politics. But if she continued her political career, she would be prohibited from contesting elections under Section 8 of the Representation of the People's Amendment Act (RoP), 1958. She would not be qualified to contest in an election for six more years starting from the date of her release. But Sasikala is legally allowed to lead a party, a move that could enable her to amass significant power in the state.

Tamil Nadu is one of the most sought after states for business investments, and it is ranked second most extensive in GDP behind Maharashtra. In 2019-20, Tamil Nadu registered a high GDP rate at 8.03 percent, double the all-India average of 4.2 percent.

While Tamil Nadu has been India's second-largest economy in successive AIADMK governments — both DMK and AIADMK’s commitment to progressive politics, combined with firm encouragement to education and developmental programs — have contributed to its growth.

TRUE: Caste-based violence has risen in Tamil Nadu, with a 40 percent increase during the lockdown.

Reports show that, in Tamil Nadu, cases of atrocities against Dalits rose multifold with the onset of the coronavirus pandemic. According to a study conducted by the Tamil Nadu Untouchability Eradication Front (TNUEF), the first few months of the lockdown saw 81 incidents of caste-based atrocities.

The National Dalit Movement for Justice identified ten states with 40 percent of their districts as "atrocity-prone" in which Tamil Nadu was also listed. Another report said crimes reportedly rose nearly fivefold starting March 2020 in the state.

MISLEADING: DMK claims to have conducted Gram Sabha Meets in 25,000 villages but Tamil Nadu only has 15,979 villages.

The latest list by the Tamil Nadu government shows that the state has more than 30,000 villages and that DMK has conducted Gram Sabha Meets in about 25,000 villages. On December 23, 2020, DMK president M. K. Stalin and his party started the Grama Sabha Meets as part of the DMK's “reject AIADMK” campaign ahead of the 2021 assembly elections.

According to the 2011 census, Tamil Nadu has only 15,919 villages, but a recent list provided by the Tamil Nadu Rural Development and Panchayat Raj Department says the state has 32 districts with more than 30,000 villages.

FALSE: Over half of this year’s fiscal budget went to states headed for elections including Tamil Nadu, West Bengal, and Kerala.

Although the central government announced multi-crore worth projects for poll-bound states, it is incorrect that half of the budget was allocated to Tamil Nadu, West Bengal, Kerala, and Assam. In her third budget speech at the National Assembly, the Finance Minister proposed to invest Rs. 1.03 lakh crore to build a 3,500 km highway in Tamil Nadu as part of road infrastructure development along the economic corridor. She also announced a road project worth Rs. 25,000 crores in West Bengal.

TRUE: Tamil Nadu has a higher poverty reduction rate than the all-India average.

Tamil Nadu is one of India's fastest-growing states and has a low poverty rate. The current state per capita income price was slightly over 1,43,547 rupees in 2015-16, about 70 percent of the Indian average, and the third-highest among the major states. The state's Human Development Index ranks second among the major provinces, and the level of socio-economic development is well above the national average.

Tamil Nadu has been one of India’s best-performing states when it comes to inclusive development. This trend has played out in both rural and urban areas. According to Tamil Nadu's Government, there was a dramatic decrease in poverty levels since 1987-88 with 43.39 percent and a further 21.12 percent in 1999-2000.

The central Government introduced New Education Policy 2020, has some major reforms in the education system. The key reforms had replaced the 10+2 system with a 5+3+3+4 structure that includes 12 years of schooling, Anganwadi for three years, and pre-schooling. The policy also mainly focuses on the "mother tongue" or regional languages. The medium of instruction up to class five or beyond should be in mother tongue or local or regional language to grasp things easily.

Hindustan Times reported that the three-language formula will be the choices of States, regions, and of course, the students themselves, so long as at least two of the three languages are native to India. However, Tamil Nadu's AIADMK has rejected the three-language formula to protect "interests of Tamil language or that of Tamils" that could be affected. Several linguistic activists and educationists have argued that NEP would eventually end up in students being forced to learn Hindi because of scarcity of teachers in other languages.

TRUE: DMK hasn’t won any Assembly Elections without allies since 1996.

TRUE: Tamil Nadu is one of the best-performing states in water management.

Tamil Nadu was awarded first-place under the 'Best State' category in the National Water Awards in 2019. As per the Guidelines for the NWA 2019, the evaluation criteria for ‘Best State’ included various parameters focusing on implementation of irrigation water supply schemes, state’s performance under micro irrigation and roof top rain water harvesting, increase in irrigation coverage among several other factors.

However, it should be noted that it has won this title based on the voluntary entries received by the Government and not by a data and context driven exercise covering the entire country.

MISLEADING: A priest outside a Chennai temple was distributing DMK pamphlets.

With Tamil Nadu elections on the horizon, political parties are doing what they can to secure votes. A tweet made on March 1 has been circulating with a video and photo of a priest in a temple allegedly handing out Dravida Munnetra Kazhagam (DMK) pamphlets. The caption added it was from a Chennai temple. It was retweeted hundreds of times with captions indicating surprise at the political advertising incident that happened at a place of worship. While a person dressed in priestly attire was handing out DMK pamphlets outside a Chennai temple, Logically confirmed with the temple administration that he does not work there.

As of March 27, the 2021 West Bengal Legislative Assembly Election, which is to take place over four weeks and in eight phases, is underway. Unsurprisingly, misinformation about the parties' respective candidates has already been circulating on...

Politicians with formidable grassroots following, often linked with Tamil cinema, have led most major electoral exercises in the state of Tamil Nadu for decades since the times one of it’s most successful actors and politicians Maruthur Gopalan...