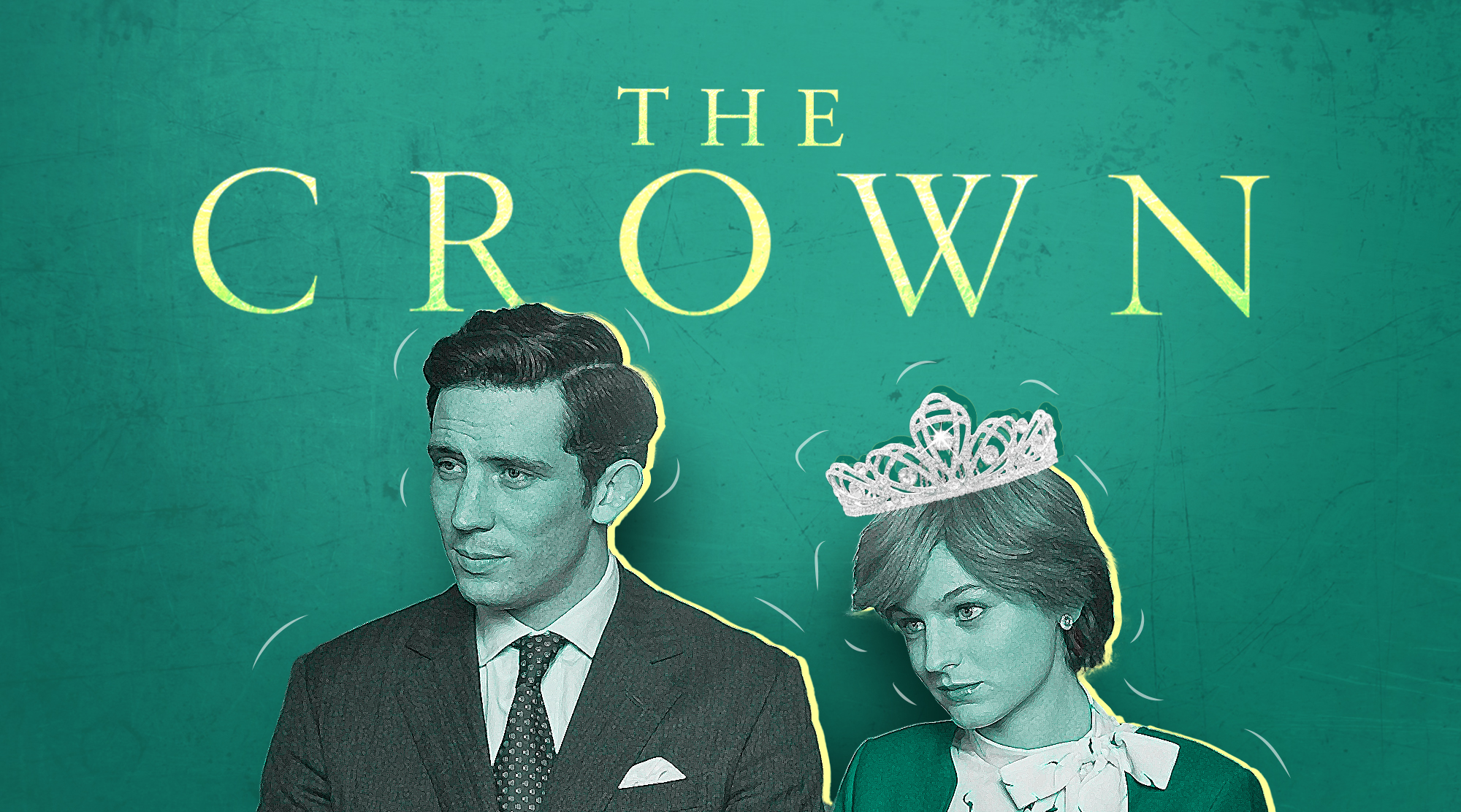 Season four of "The Crown", the show that delves into the history of the Royal Family, debuted on Netflix on November 15. The season is set in the late 1970s and 1980s, and focuses on Prime Minister Margaret Thatcher and Princess Diana.

In the season, Diana meets Prince Charles for the first time dressed as a "mad tree" and/or “woodland sprite” for a school production of "A Midsummer Night's Dream". She is hiding behind a large plant pot at Althorp, the Spencer family home in 1977.

In real life, the couple did meet in 1977 at Althorp, but Diana was not dressed like a tree or sprite and the couple did not discuss "A Midsummer Night's Dream". In their February 1981 engagement interview, Diana described them as meeting "in a plowed field".

In 1987, news that two of the Queen’s cousins were living in a psychiatric hospital broke.

The episode “The Heredity Principle” depicts the institutionalization of two of the Queen’s first cousins, Katherine and Nerissa Bowes-Lyon, who, owing to their developmental disabilities, were hidden from the public and declared dead.

In 1987, the news that two of the Queen’s cousins were living in a psychiatric hospital broke. Katherine and Nerissa Bowes-Lyon, who both had the mental age of three years olds and never learned to talk, were the third and fifth daughters of John Herbert Bowes-Lyon, the brother of the Queen Mother, and his wife, Fenella Bowes-Lyon. In 1941, when Nerissa was 15 years old and Katherine was 22, they were sent from the family home in Scotland to Royal Earlswood Hospital at Redhill in Surrey, where they lived out the rest of their days.

In a 2011 Channel Four documentary titled “The Queen’s Hidden Cousins”, care workers at Earlswood testified that whenever members of the royal family appeared on television, the Bowes-Lyon sisters would stand up and salute or curtsy.

A man broke into the Queen's bedroom and spoke to her at length.

In reality, Fagan and the Queen didn't speak for very long.

The fifth episode of the new season of “The Crown” has a one-word title: “Fagan". Fagan refers to a man called Michael Fagan who, in 1982, broke into Buckingham Palace, not once but twice. During his break-ins, Fagan roamed the palace halls, drank wine, sat on thrones, and admired paintings.

According to “The Crown”, during his second break-in, Fagan tiptoed into Queen Elizabeth’s bedroom, threw open the curtains and woke her up. However, the real Fagan told The Sun that he didn't wake up the Queen. "She was wide awake when I got in there," Fagan said.

The Washington Post reports that, "On screen, [Fagan] wants to chat with the Queen about the tough economic policies of Prime Minister Margaret Thatcher. In real life, it was probably the drugs—specifically magic mushrooms—that made him do it."

“I forgot you’re only supposed to take a little handful,” he told the Independent in 2012.

While the show depicts Fagan having a lengthy conversation with the Queen on the night of the break in, in reality the exchange was brief. "I pulled back the curtain and she said, ‘What are you doing here?’" Fagan has said. After sitting down on the bed, the Queen apparently added "I’ll be back in a minute" and quickly left the room. Fagan was then taken down the hall and given a whiskey by a footman, and was arrested shortly thereafter.

The relationship was tense, and the two women had opposing views on several issues.

Neither the Queen nor Thatcher ever spoke publicly about their relationship, but there was tension between the two women during Thatcher’s 11-year stint as Prime Minister.

In his book, “The Queen and Mrs. Thatcher: An Inconvenient Relationship”, author Dean Palmer writes that their fundamental disagreement was simple: “The palace thought Thatcher vulgar, and the prime minister thought royalty was irrelevant.” According to Palmer, Thatcher apparently loved to lecture, which the Queen detests, and Thatcher had little to no sense of humor whereas Her Majesty has always maintained “a dry wit”.

In another book, “The Iron Lady: Margaret Thatcher, from Grocer’s Daughter to Prime Minister”, author John Campbell writes, “The Queen was said to dread her weekly audience with her Prime Minister because Mrs. Thatcher was so stiff and formal.”

The two seemed to have opposing views on some critical issues. Since her accession in 1952, the Queen had been devoted to the principle of national unity, but within two years of Thatcher’s time in the office, Britain seemed more divided than ever: a recession caused at least three million people to fall out of work, riots erupted in Bristol, Brixton, and Toxteth; Bobby Sands led a hunger strike of Irish republican prisoners; and there was an increase in homelessness.

On 20 July 1986, The Sunday Times ran a front-page story claiming that the Queen privately felt Thatcher’s approach to be “uncaring, confrontational and socially divisive”. The source was allegedly the palace press secretary, Michael Shea, but the Queen herself was mortified. She rang Thatcher to apologize, and the relationship survived. However, the prime minister did not forget it. “Those little old ladies will say Thatcher is upsetting the Queen,” she told one adviser. “I’ll lose votes.”

While there were certainly rifts between the two women, they had a respectful relationship. Though the two women never became friends, the fact that the monarch attended Thatcher’s ceremonial funeral in 2013 tells its own story. Moreover, the Queen did indeed honor Thatcher with the Order of Merit, which she can bestow only upon 24 living people.

The most positive account comes from Robert Hardman’s in his 2019 book, “Queen of the World”. In this book Hardman insists that the Queen at least had a “profound respect” for Thatcher’s achievements, and had “a mild fascination in learning what made her tick”.

The two women did in fact meet for lunch prior to the royal wedding.

One of the key stories featured in the fourth season of “The Crown” is the courtship and marriage of Princess Diana and Prince Charles. In one episode, the two women meet up for lunch after the big engagement and before the marriage.

According to Andrew Morton's book “Diana: Her True Story in Her Own Words”, which was written with his subject's cooperation in 1992, Camilla sent Diana a letter, dated two days before the official engagement announcement, to Clarence House. The letter read, "such exciting news about the engagement. Do let's have lunch soon when the Prince of Wales goes to Australia and New Zealand. He's going to be away for three weeks. I'd love to see the ring, lots of love, Camilla." Morton reports that Diana was wowed by this letter, and organized lunch. Morton also writes “that it was during this lunch that Diana became suspicious. Camilla kept asking if Diana was going to hunt when she moved to Highgrove.”

The duo was photographed together in 1980 when they both watched Prince Charles compete in a horse race. Camilla was also a guest at the wedding of Charles and Diana in 1981. Aside from these three occasions, it is not known if they met again.

According to the biography “Diana: In her own words”, Prince Charles also said "whatever ‘in love’ means" when he proposed to Princess Diana.

Prince Charles proposed to Princess Diana in February of 1981 after less than a year of dating. The engagement was officially announced on February 24, 1981, and as per royal tradition, the newly betrothed couple gave a TV interview shortly after the news became public. The interviewer asked if they can find the words to sum up how they're feeling.

"Just delighted, and happy," Charles says, looking over at Diana. "I'm amazed that she's been brave enough to take me on!"

The interviewer, clearly hoping for something a little more effusive, prompts him: "And, I suppose, in love?

“Of course!" Diana responds quickly, after which Charles says, "Whatever 'in love' means."

Diana shook the hand of a man suffering with HIV/AIDS without wearing gloves for the first time in Middlesex Hospital, London in 1987.

In episode 10, Princess Diana visits Harlem Hospital in New York as the last stop on her solo tour. There, she is photographed hugging a little boy with AIDS. The scene gives the impression that it was the first time Diana had made contact with someone with HIV/AIDS. However, Diana had started her work much earlier, and had opened the UK’s first dedicated HIV and AIDS unit in London on April 19 1987 in Middlesex hospital.

In Middlesex hospital, Diana shook the hand of a man with HIV/AIDS without wearing gloves during a time when people wrongly thought that the illness could spread through touch. Through this simple action, Diana challenged these beliefs and debunked misinformation around AIDS.

Philip and Diana tracked down a rare stag on the grounds of Balmoral Castle.

There are no accounts that suggest that Philip and Diana teamed up to track down a rare stag on the grounds of Balmoral Castle.

By all accounts, Diana did share a close bond with her father-in-law from the very beginning. According to the biography “Prince Philip Revealed” by Ingreid Seward, "When Diana first joined the royal family, it was Philip who came to her aid, sitting next to her at black-tie dinners and chatting to her while she learned to master the art of small talk."

According to the Daily Express, Diana was accused of wounding a stag while deer stalking with Prince Charles shortly before their wedding. Apparently, after this, she vowed never to take part in the bloodsport again.

Double Check: Do We Still Need Fact Checking in a Biden Presidency?

As the 2020 presidential elections concluded in the United States with Joe Biden as the President-elect, some social media users claimed that there will be no need to fact check the president anymore. I’m a senior fact checker at Logically. I...

On December 2, OpIndia, a right-wing Indian news website published a piece railing against the practice of fact checking, calling it a new name for the “same old propaganda journalism” and sarcastically calling fact checkers “unbiased angels...