Double Check: Did Costco Increase the Price of Its Hotdog Deals? 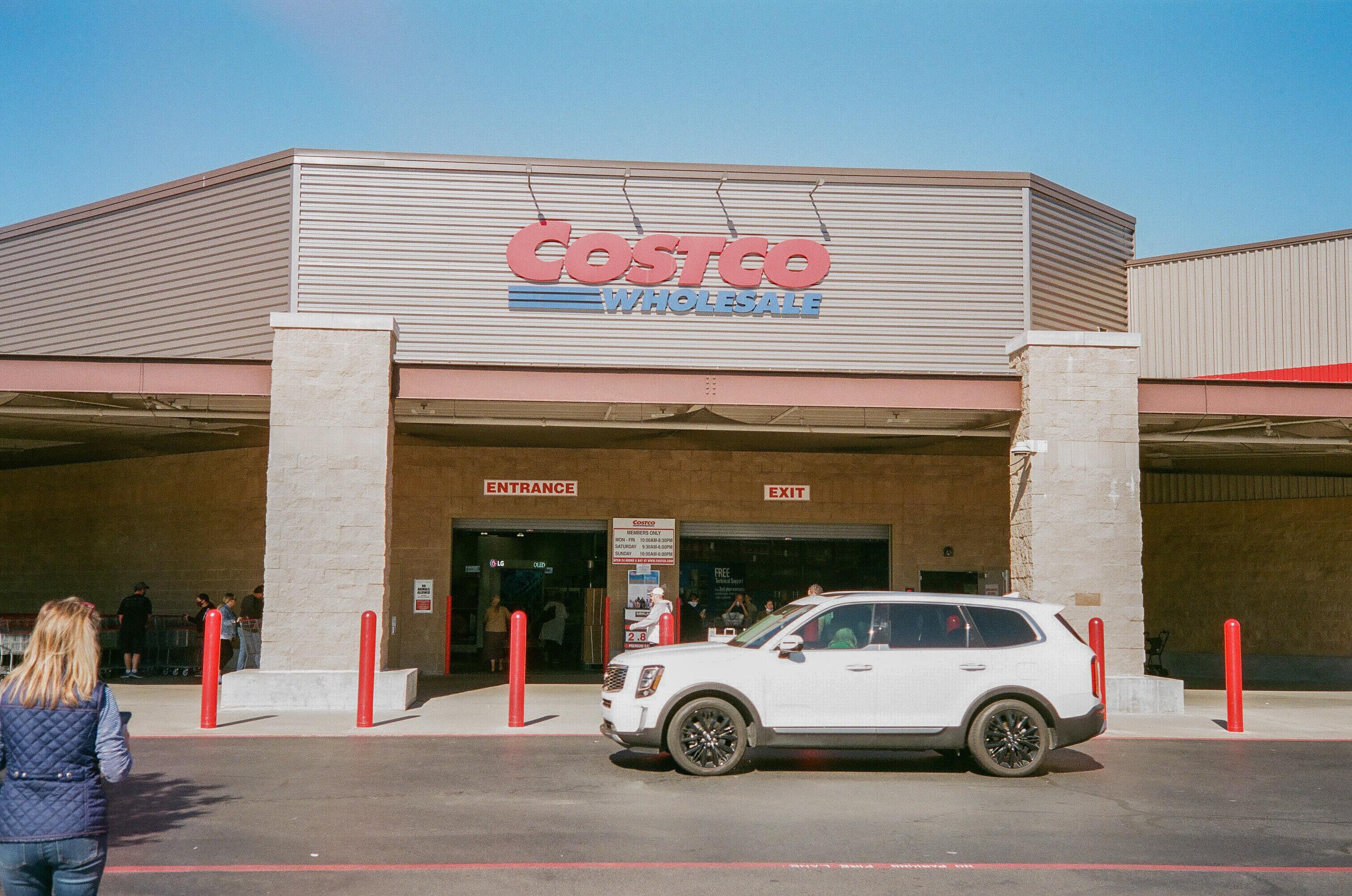 Anyone who knows me knows I am a fully unironic Costco stan. Where else would I get enough Coke Zero to feed my terrible habit, a new tumble dryer, and the best tasting 18" five-cheese pizza for under a tenner? While pizza is the draw for me, one of the biggest sellers on the food court at Costco is actually its hotdog. Available in a combo with a soda for just $1.50 in the U.S. and £1.50 in the U.K., the deal is a loss leader whose price has remained unchanged since Costco introduced it in 1985.

37 years later, on May 18, 2022, Twitter prankster @JohnWRichKid changed their avatar and account name to suggest they were a breaking news account before tweeting that the retailer was raising "food court hot-dog prices by $1."

Original tweet from @HouseGOP with the caption "#Bidenflation comes for everything," and the quote tweet from @JohnWRichKid with changed avatar and account name.  His tweet says, "***BREAKING—COSTCO ANNOUNCES PLANS TO RAISE FOOD COURT HOT-DOG PRICES BY $1 DUE TO INFLATION."

Within minutes, Twitter users jumped on the tweet, lamenting the supposed hefty increase. Two hours later, in an ill-fated attempt at dunking on President Biden, @HouseGOP retweeted the breaking news, with the caption "#Bidenflation comes for everything." The official account of the Republican Conference of the U.S. House of Representatives later deleted the tweet, although it was quoted by @JohnWRichKid, who simply said "got ‘em." He later immortalized the quote tweet in a video montage of Twitter users who had fallen for the post, with the caption "Don't Trust, Verify."

But the chaos didn't end there. Costco's stock plummeted 13 percent in reaction to the fake news that the hotdog deal had increased in price. Users tweeted @JohnWRichKid, showing local news outlets covering the story, with multiple online outlets reporting the same. One user, @melcromancer, shared data from NASDAQ, translating the percentage to an equivalent of a $60 billion loss for Costco. They later clarified that they got their math wrong, although the sentiment of the scale of Costco's losses remained the same. 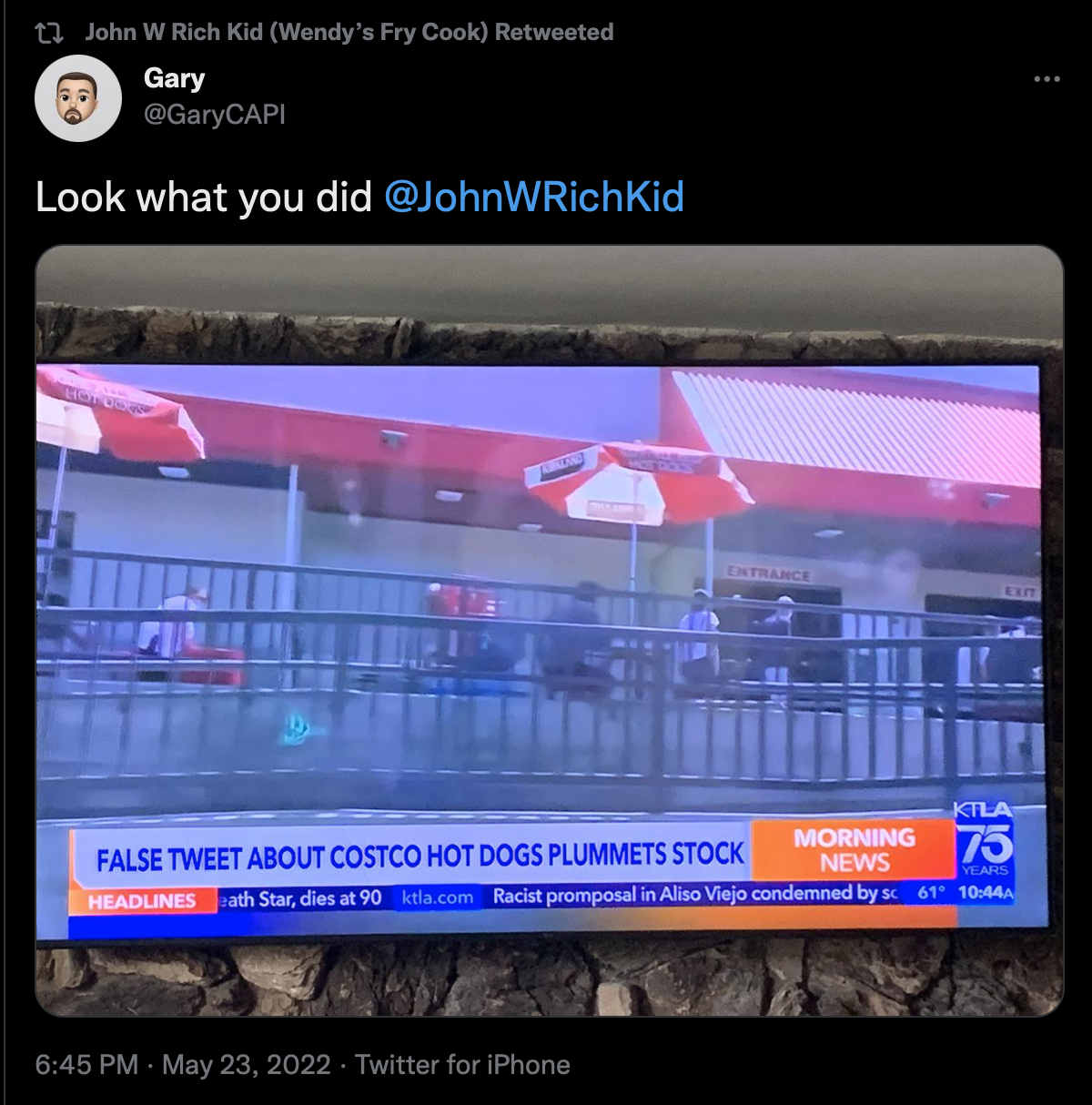 Tweet to @JohnWRichKid saying "Look what you did," from @GaryCAPI featuring a photo of a news report. The news report features a chyron with the caption "FALSE TWEET ABOUT COSTCO HOT DOGS PLUMMETS STOCK." 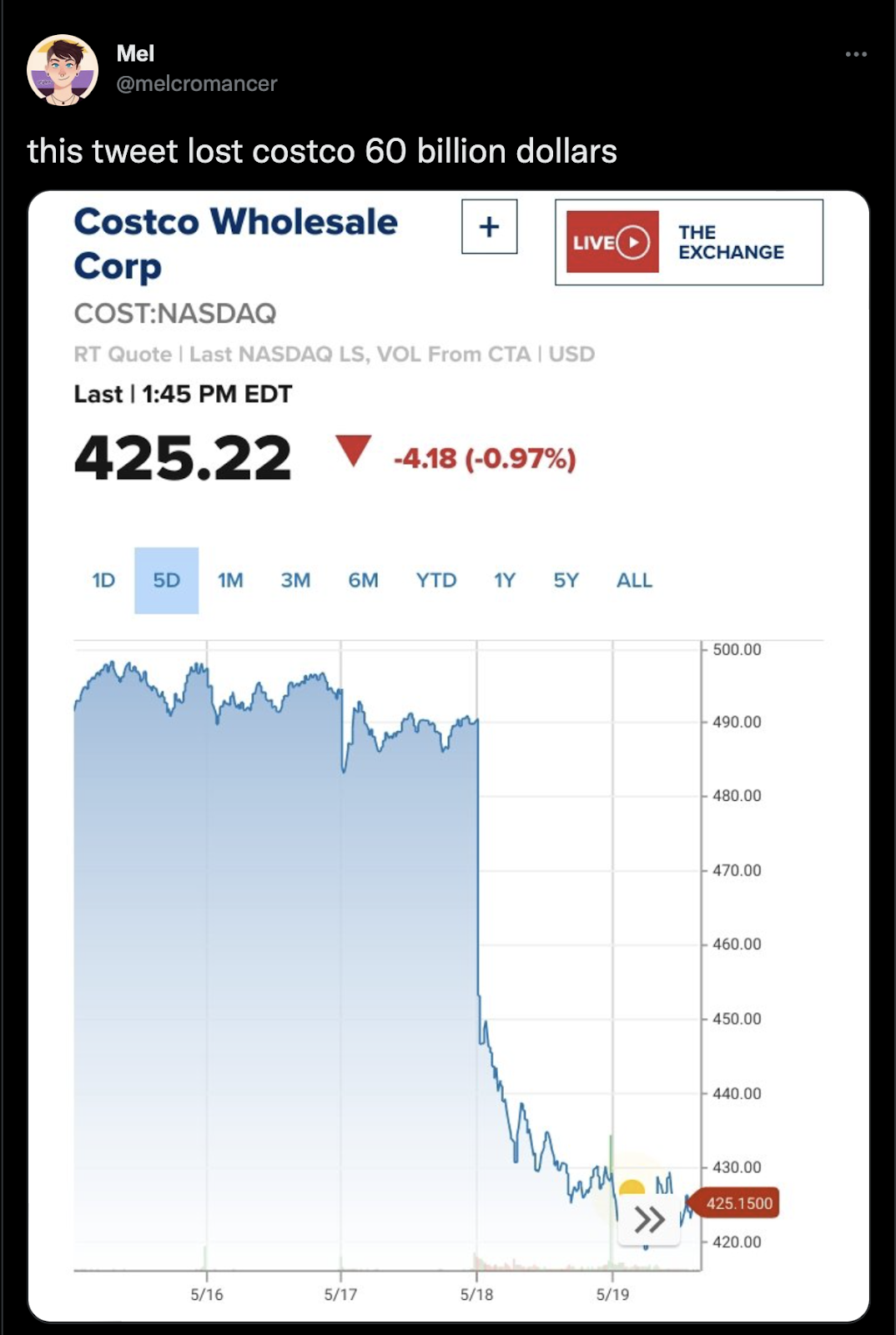 Tweet from @melcromancer with a picture of Costco plummeting on the NASDAQ stock index, with the caption "this tweet lost Costco 60 billion dollars," and quote tweeting the original joke tweet.

Although it would be fun to believe that a post caused one of the biggest retailers in the world to amass huge stock losses, the reality is far less exciting. Financial commentators have pointed out that Costco was hit hard as a result of rival retailer Target's company earnings report. The stocks took a sympathy dive in acknowledgment of what is a difficult time for retailers due to decreased consumer spending and – ironically – inflation. So, while the tweet was fake, the issue of inflation was not.

As for the hotdog deal, it is unlikely to rise in price anytime soon. Famously, Costco CEO Craig Jelinek suggested changing the price to founder Jim Sinegal. The suggestion did not go down well, with Sinegal responding, "If you raise the effing hot dog, I will kill you. Figure it out." And figure it out Jelinek did, by building Costco's own manufacturing plant in Los Angeles. The strength of Sinegal's convictions is not to be trifled with ­– when Coca-Cola wanted to raise prices, Costco pulled all their products from stores until they acquiesced – something to bear in mind the next time you see a tweet suggesting the price of Costco's hotdog deal has increased.

There is a common misconception that until recently, people thought the world was flat. This is not the case. The Greek mathematician Pythagoras considered the idea of a round earth in 500 BCE, and Plato described the Earth as the center of a series...

Russian Disinformation on Students Filters Through to Indian Media

This article was corrected to reflect the fact that the refusal of Indian and other students of color at the Ukrainian border was explicitly racist. It also added further context to the scatter graph of Twitter users.