On January 3 this year, activist Rachna Dhingra highlighted in a Twitter thread that hundreds of survivors from one of the world’s worst industrial disasters — 1984’s Bhopal gas tragedy — were being targeted and unethically recruited to participate in phase three of Bharat Biotech’s Covaxin trials. Many participants are still suffering from ailments in the aftermath of the disaster, in which a chemical leak of methyl isocyanate from American-based Union Carbide Corporation’s insecticide plant killed an estimated 15,000 and affected over 600,000 workers.

Covaxin might have been approved for emergency use by the Indian government to combat Coronavirus, but glaring loopholes in how locals were enrolled for the trial have once again highlighted that poor application of guidelines disproportionately affect vulnerable communities.

From a continually updated list of guidelines, Logically found Covaxin’s phase three trials in Bhopal broke multiple rules, not just while recruiting participants but also in the care afforded to them following the dose being administered. The People’s Hospital in Bhopal reportedly incentivized locals from low-income groups close to the Union Carbide factory to participate with the promise of Rs. 750 (often over two or three times the daily wage of a laborer) and miscommunicated assurances of immunization from the novel coronavirus.

They made me sign some papers and said I have nothing to worry about. They never gave me any documents, other than one for insurance in case something happens to me, but I don’t know how to read.

“I took the vaccine because I thought it will protect me from COVID-19,” Yash, a young participant who enrolled himself in early December last year, told Logically. Yash is one of the many Shakti Nagar residents who signed up for phase three of the trial.

“On December 8, they came to our locality making announcements about a vaccine and were taking us to the hospital in their cars. They said it was a trial,” Ramesh Sen, another resident, told activist Rachna Dhingra in a video. When Dhingra asked Sen if he understood what a trial meant, Sen asked, “How am I supposed to know?”

“They made me sign some papers, said it’s a coronavirus vaccine, and said I have nothing to worry about. They never gave me any documents, other than one for insurance in case something happens to me, but I don’t know how to read,” Chanda Devi, a local participant said. In some cases, the Informed Consent Form (ICF) was signed when participants arrived for their second dose.

The Indian Council of Medical Research (ICMR) guidelines stipulate that the contents of a trial should be presented clearly in a manner that is easy to understand and is commensurate with the comprehension level of the participants. Additionally, the guidelines require language used in the ICF to be sensitive to the participant’s social and cultural background. 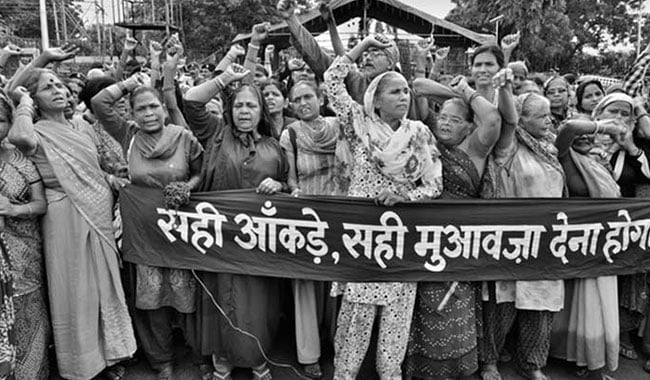 Victims of the disaster have campaigned for justice for decades. Image: Raghu Rai/Magnum Photos

“There is a power differential in the health space,” says Anant Bhan, a bioethics researcher. “How can someone deny taking an income when getting a job is hard to find? Researchers are duty-bound to explain what a participant is enrolling themselves beforehand, but there is a lot lost in translation.”

Seventy-year-old Mansingh Parihar was one of the 15 to 20 residents taken in private vehicles by People’s Hospital researchers on December 21, 2020. Parihar was told he would not contract COVID-19, and he told Logically there was no mention of a trial. In addition to not being given time to consult with friends, family, or other medical professionals about their decisions, several participants claim that they did not receive enough information to fully understand what they were agreeing to. Moreover, Parihar says People’s Hospital denied him treatment when he started developing a high fever, felt weak, and got a cold a few days after the first dose. He never went for a second.

Several guidelines were breached in the recruitment of Parihar and others to the trial. Researchers are forbidden from giving any unjustifiable assurances, and they also must ensure illiterate participants are given time to fully comprehend what agreeing to a trial entails in the presence of an impartial literate witness through the consent process. Protocol also stipulates that the process should be recorded for less educated or vulnerable groups. None of these guidelines were followed. In fact, People’s Hospital’s Dean Anil Kumar Dixit recently reiterated during a press conference that researchers took audio/visual consent of those above 60 years old, but received no other directions from the ICMR.

“I can tell you [participants’] consent is video recorded,” Shankul Dwivedi, Madhya Pradesh’s state representative for the Indian Medical Association’s Junior Doctors’ Network told Logically. “Maybe patients could have trouble understanding, but researchers can perceive it is on [participants] to ask questions. If they don’t ask questions, how is the onus on the principal investigator?” Dwivedi also said oversight and irregularities in following protocols is a likely possibility when it comes to conducting trials on low-income groups. 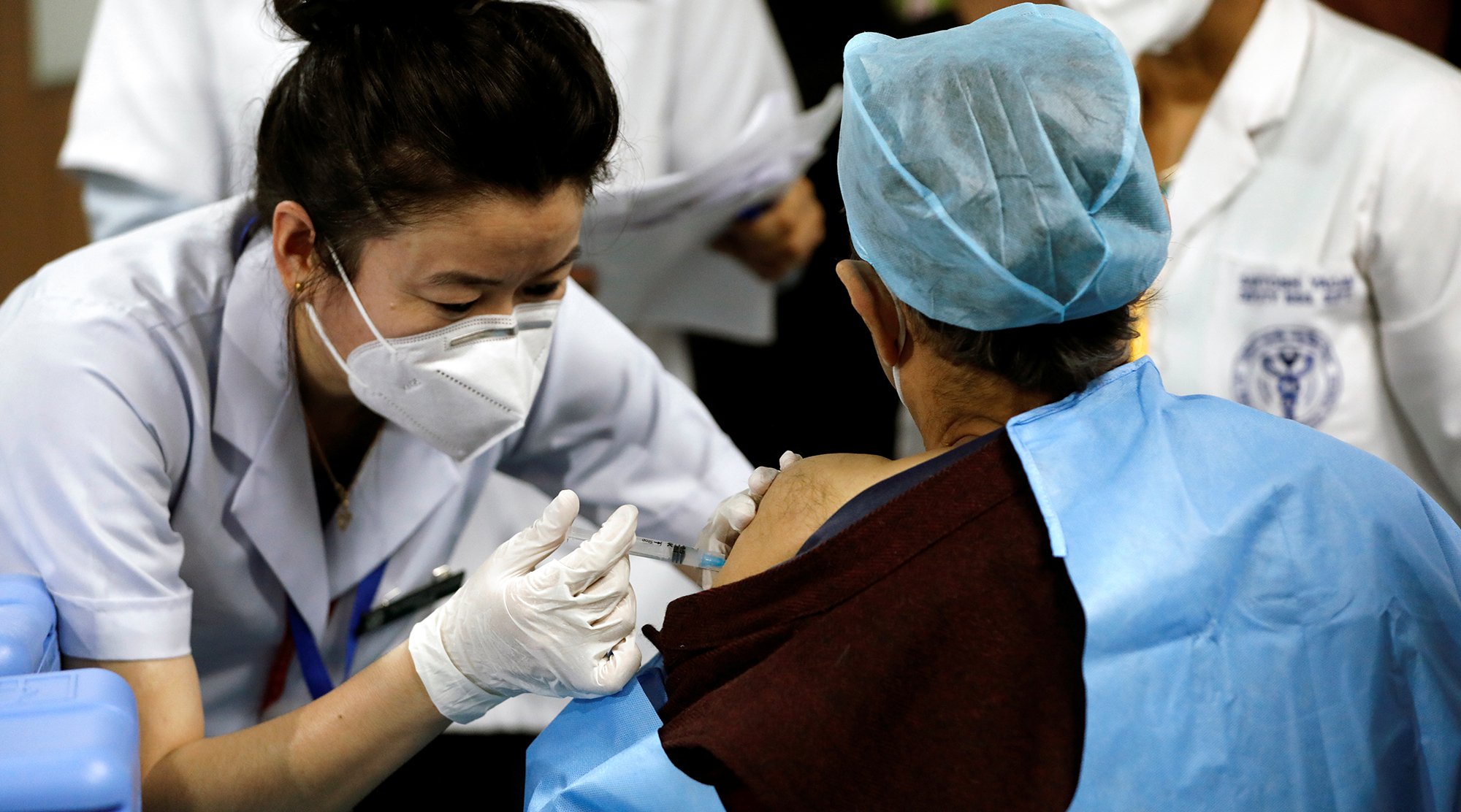 Bharat Biotech has issued a statement advising against vaccination for people with existing medical conditions, meanwhile over a month has passed since several survivors reportedly with ailments resulting from the gas tragedy were given Covaxin. The Hyderabad-based firm faced high rejection rates when phase three trials were announced, which is why members from lower-income communities were targeted instead of higher-income groups, according to bioethicists. Reports of shortage of volunteers coincided with the time participants from around the Union Carbide plant started being recruited.

Along with AstraZeneca’s Oxford vaccine, Covaxin was authorized for emergency use before Bharat Biotech completed phase three of its trial and the data was subject to peer-review — standard practice before a public rollout. But health experts raised concerns over the rushed manner in which it was granted approval. Health watchdog All India Drug Action Network said it was "shocked" and stated a lack of transparency would "raise more questions than answers and likely will not reinforce faith in our scientific decision making bodies”.

Following the watchdog’s prediction, healthcare workers in several states nationwide have expressed apprehension about receiving the vaccine with less than 50 percent opting for the jab since its rollout on January 16 in states like Delhi and Tamil Nadu. While healthcare workers have been privy to information before opting for a vaccine, none of these considerations were made for Bhopal gas tragedy’s survivors who were reportedly lured into the trial.

This isn’t the first time vulnerable locals close to Bhopal’s Union Carbide plant have been recruited for a clinical human trial. In 2010 it was reported that multiple illegal human drug trials were conducted on survivors that violated international ethical standards. Similar to Bharat Biotech’s vaccine trials, patients were unaware that they were participating in any of three trials that the Independent investigated. At least 14 people died during these trials.

“As the company and activists go back and forth between how the trials were conducted, I think there is enough evidence to suggest rules were not followed,” Amar Desani, editor of the Indian Journal of Medical Ethics told Logically. “It would be a disservice to not believe the accounts we are hearing from the participants in Bhopal who were specifically targeted.”