Double Check: Did Fake News Cause Protests At Chandigarh University? 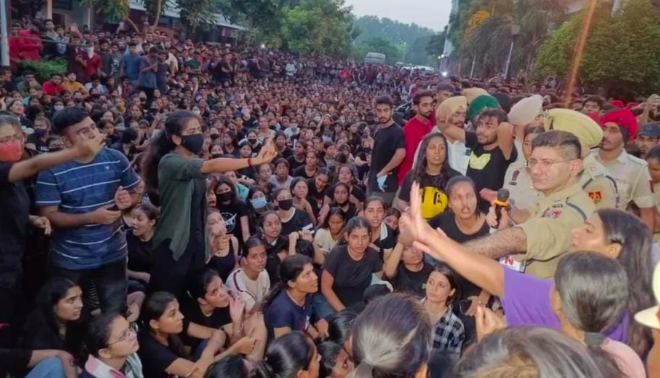 The Chandigarh University in the Indian state of Punjab made headlines nationwide after its students took to the streets protesting an alleged leak of ‘objectionable’ videos of women hostelers that were reportedly posted online. The students were further aggravated by false claims, rumors and misleading online posts that have since been debunked by Logically and other fact-checking organizations.

The protests erupted after a few female students made complaints to the hostel authorities over their suspicions that another female resident had allegedly secretly recorded them while showering, the Hindustan Times reported.

Two hostel wardens have been suspended for negligence and three people, including the female student accused of making the videos, have been arrested. But even as the police and university management assure students of a prompt and thorough investigation, a cloud of uncertainty and fear hangs over the student community.

“We are fear-stricken after the recent events in college,” said Mehak Banday, a final-year graduate student told Logically, adding, “It is not like one can feel more safe in the hostel, right?” Banday was one of the many hundreds of students, women and men, who were part of the protest on the Ludhiana-Chandigarh highway on the evening of Saturday, September 17.

As the crowd swelled, so did the speculation. Soon, media reports were filled with claims that videos of as many as 60 women from the university hostel had been leaked and were accessible on the internet. Between September 17 to September 19, ‘Chandigarh University’ had over 100,000 mentions online. Among these mentions, terms like ‘60 girls mms’, ‘videos of 60 girls’, and ‘made videos of 60’ were used over 7,300, 9,800 and 6,900 times respectively, analysis via Brandwatch found.

Reach of ‘Chandigarh University’ between September 17 to September 20 on an hourly basis. Source: Brandwatch

The media frenzy even led to rumors that several female students had attempted suicide. Social media posts and messages began to be shared with supposed ‘details’ expanding on these rumors, including claims that three girls had been admitted to the Intensive Care Unit (ICU) of the local hospital, and that videos of students showering had been uploaded to adult websites.

Given the sensitive and emotive nature of these rumors, it is little surprise that tensions escalated to the point where, to use police parlance, a ‘law-and-order issue’ was on the cards.

Fortunately, some of these rumors and claims proved relatively easy to debunk, allowing for a defusing of the situation. Logically, for instance, was able to assess a number of claims and conclusively determine they were not true.

Perhaps the most serious of these was the claim that a female student of Chandigarh University had died by suicide. The police and the university, however, were able to clarify that this was not the case, with Mohali Senior Superintendent of Police (SSP) Vivek Sheel Soni issuing a statement. The claim was also rebutted by the student community, with student welfare head Amrinder Singh Kann confirming to India Today that no one had attempted suicide.

The false narrative about student suicides also covered claims that three students had attempted suicide and had to be admitted to the ICU. As with the claim about the student who had allegedly died by suicide, footage of a student fainting and being taken away in an ambulance was used to support these rumors. On September 18, however, Chandigarh University released an official statement on the incident. Dr. R. S. Bawa, Pro-Chancellor, Chandigarh University, said, "no girl has been admitted to hospital in the incident."

Several news outlets, including the Hindustan Times, The Quint and the Indian Express spoke to the police who clarified that a few girls had fainted during the protests, and had been taken to a local civil hospital, from which they were soon discharged. Kann, the student welfare head, had also told India Today that two students had fainted due to the heat and humidity, and had been administered first aid. 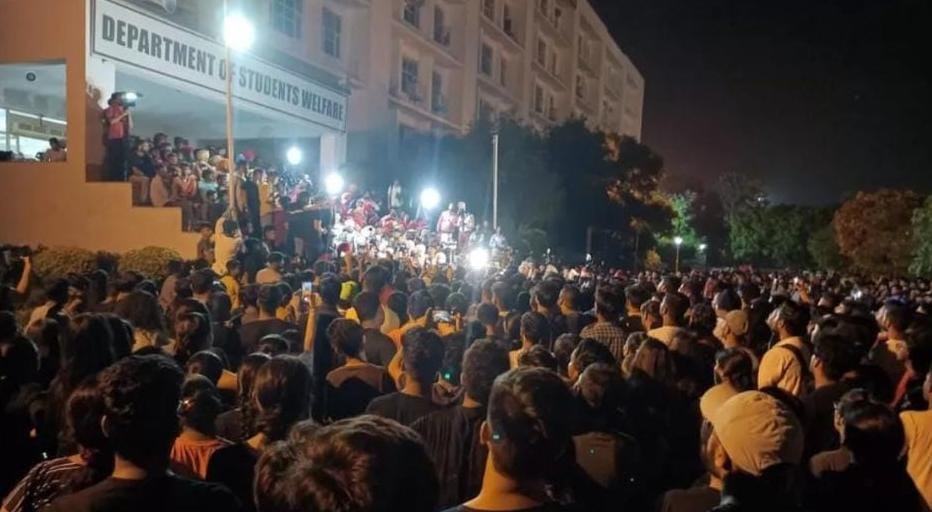 With the students already on edge over the main controversy, a false claim about the university’s reaction could have added fuel to the fire. A rumor began to be shared on social media that Chandigarh University had suspended female students for their protests. While the university administration had drawn flak for the way in which it had responded to the protests  – from a warden’s misbehavior with students to locking the girls in their hostels at one point – this particular claim had no basis in fact.

As reported by multiple newspapers and media houses, including the Times of India and NDTV, the protests were called off after the district administration and police provided assurances of a fair and transparent probe. The Punjab government had announced the formation of a three-member Special Investigation Team (SIT) made up of only women police officers to probe the incident. For its part, the university declared non-teaching days till September 24 to carry on the investigation. In a significant step, it also suspended two hostel wardens for negligence and misbehavior with students.

Not one news report or public statement by the police, university or students made any mention of students being suspended, making it clear that the rumor was just that.

Proving the above claims to be false did not, however, address the anxiety and fear that had arisen from the root of the whole controversy: the alleged recording of secret videos of female students in the hostel, which were then sold/circulated on the internet.

According to the police, this original concern has proven to be – thus far – baseless. Speaking to India Today on September 18, Punjab Police Mohali DC Amit Talwar clarified that in a preliminary investigation conducted by the university, the only relevant video found on the accused female student’s phone was a personal one of hers, which she had shared with her boyfriend. Dr. R.S.Bawa, Pro-Chancellor, Chandigarh University, said in a statement to the media that: "There is another rumor circulating through media that 60 objectionable MMS has been found of different students. This is totally false and baseless."

Reach of ‘videos of 60 girls’ between September 17 to September 20. Source: Brandwatch

The accused student's mobile phone has been seized for forensic analysis, the police said. She was arrested on September 18, along with 23-year-old Sunny Mehta (her alleged boyfriend) and his 31-year-old friend Rankaj Verma; the latter two from Shimla. The Hindustan Times quoted Additional Director General of Police (ADGP) Gurpreet Deo, who said, "the video, which was shared by the girl, was not uploaded on any site but went to three people. We have got the videos deleted."

As of 19 September, no evidence had been found by the police or provided by anyone else to show that any videos had been sold to anyone or uploaded to the internet. As a result, Logically was able to publish a preliminary fact check at the time marking the claim as false.

There is a risk, though, that new information could come to light during the ongoing investigation, and thus there is understandably little closure for the female students of the university.

“According to my knowledge, no one in the university has seen the videos. It is possible that as soon as the issue gained momentum, the accused might have deleted videos of other students taken without consent”, said Banday. India Today reported on 20 September that the ‘third person’ to whom the accused female student had allegedly sent her own video had been identified as one Mohit – and that, according to police sources, the police have recovered WhatsApp chats which indicate he advised her to delete some videos from her phone. Both India Today and Times of India have claimed, based on police sources, that more than one video has been recovered from the phones of the accused.

It should be noted that no official statement has been made by the police regarding these developments.

While the protests may have been called off, the arrests of the three accused have failed to dampen suspicion in the student community. “Even though the police have said they have found only private videos of the accused, there seems to be more to the story,” said Banday. “If the accused had only shared her private videos with her boyfriend, then why would she be arrested? After pressure from the students the police said they will look into the possibility of more videos and said that they have taken the phones of the accused for forensic investigation.”

The case against the accused has been registered under Section 354-C (voyeurism) of the Indian Penal Code and relevant provisions of the Information Technology Act. All three arrested so far were remanded to seven days’ police custody on 19 September.

The investigation looks like it will be anything but straightforward, with the lawyer of the female student who has been arrested claiming that she was being blackmailed into making the videos, according to Mint. News agency Press Trust of India (PTI) has also reported that police sources are investigating a potential blackmail angle in the case.

As a result, while numerous false narratives that cropped up around the developments in Chandigarh University have been swiftly and conclusively debunked, certain claims can only be fully assessed and addressed once the police complete their investigation.

The entire saga has demonstrated just how easy it is for misinformation and disinformation to distort the narratives around matters which are of genuine concern. Given how easy this has proved to be, it reaffirms the importance of the job that needs to be done by the media and specialist fact-checkers to prevent panic and ensure such situations do not escalate out of control.

The Epoch Times may not be a household name in the UK right now, but many will be waking up across the country today to find a free newspaper bundled in with their post bearing their name. The paper’s front page headline reads “How China’s Communist...