As millions of Indian football fans tuned into the UEFA Euros 2020 on online streaming platform Sony LIV, an advertisement from a major tournament sponsor that would usually not be aired – a Hindi ad for online bookmaker Betway – ran routinely during breaks. While some were already familiar with online betting and had registered themselves after uploading a copy of their government ID, others wondered how Betway ads were streaming on Sony LIV – especially since betting is often regarded as illegal in India. 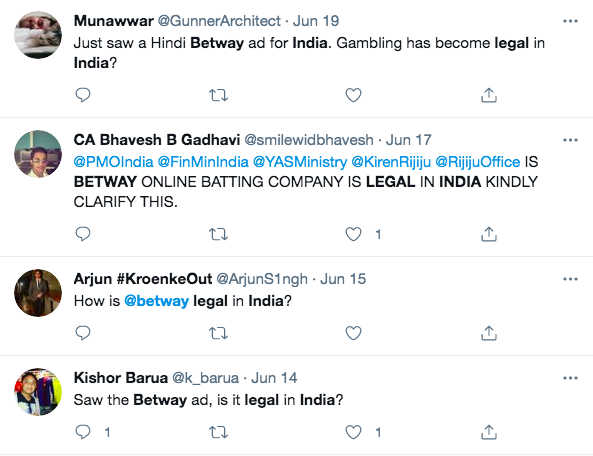 In reality, although sports betting is mostly illegal, there are grey areas that allow the practice to take place in some cases. The medium through which a bet is placed (eg. in a casino, a gambling den, or via an app), differing regulations around whether a game is based on skill or luck enable online platforms to exploit legislation loopholes. For foreign operators, having a license from a region where betting is legal, providing the ability to conduct transactions in Indian currency, and making users provide a proof of identity is enough to allow them to function.

Gambling has always been a state matter, but with land-based casinos reserved only for certain states and specific games, the popularity of online betting has skyrocketed. Sikkim, Daman, Goa, and Nagaland are the only four states to allow gambling, both Telangana and Andhra Pradesh have banned online gambling, Tamil Nadu permits skill games, while Kerala has banned online rummy played for stakes.

Since most states have adapted their gaming laws based on the pre-independence Public Gambling Act 1867, in an increasingly demanding market, the regulatory framework becomes all the more confusing. The Supreme Court did address the matter in 1957, when they determined the legality of placing money on a game depending on whether it was a game of skill or a game of chance. The Supreme Court noted that games of skill would be where “success depends principally upon the superior knowledge, training, attention, experience and adroitness of the player." Since many games can be a combination of skill and chance, skill would have to be the predominant factor in these games. Such games are considered outside the purview of gambling and are not prohibited.

This distinction does have loopholes. Since the test is not objective, different courts have interpreted games differently. While poker is a game of chance according to the Gujarat and Bombay High Courts, it is a skill game according to the Karnataka High Court. Additionally, while the Supreme Court called rummy a skill game, it also said it may be treated as a chance game if stakes are involved or game operators make profits. “Such a classification seems odd in a digital era where the country is witnessing umpteen gaming startups, at least one gaming unicorn, and where netizens have easy access to stock and even cryptocurrency (another regulatory concern) trading platforms online,” wrote lawyer Akshay Sachthey for the Financial Express.

Experts are calling for a more active role of a regulatory authority to not only make betting laws easier but also monitor an increasingly popular market. The online gaming segment grew 40 percent in 2019 reaching 65 billion rupees and is expected to reach 182 billion rupees by 2022, according to a March 2020 report by the Federation of Indian Chambers of Commerce & Industry and EY report on India’s media and entertainment industry. This growth was enabled by the popularity of fantasy games on the back of sports like cricket and football, which grew over 100 percent since 2018, with an “incentive to win money in transaction-based games coupled with a more pervasive mobile payments ecosystem” cited as another reason.

Additionally, transaction gaming grew by 50 percent in 2019 led by fantasy sports games, which grew by 118 percent. Awareness and trial of fantasy sports games grew due to high-decibel marketing campaigns with celebrities. As the FICCI and EY report estimated, the number of people playing fantasy games crossed 100 million in 2019. Growth in transaction-based games has been driven by ease of payment, increased smartphone penetration, regional language interfaces, participation not just before but even during live sports, better security, and instant withdrawal of winnings. Other transaction-based games like rummy, poker, etc. grew at around 30 percent in 2019.

In a surprising turn of events, the Prime Minister's Office recently contacted NITI Aayog, requesting all its files on real money gambling with a view to possibly addressing the demand to regulate India’s online gaming sector. While what prompted this move remains unclear, experts and gamers susceptible to lawsuits and fraud are hoping for intervention from the central government for some semblance in an otherwise unbridled industry.

Boris Johnson's plan to prorogue parliament is approved by the Queen

The UK government is going to prorogue parliament, and the country is divided in its reaction.

Labour plans to make broadband free for all of Britain

Labour has plans to provide free broadband for all of Britain if they are elected by nationalising Openreach, part of BT.