Double Check: Does West Bengal Have the Highest Rate of Crimes Against Women? 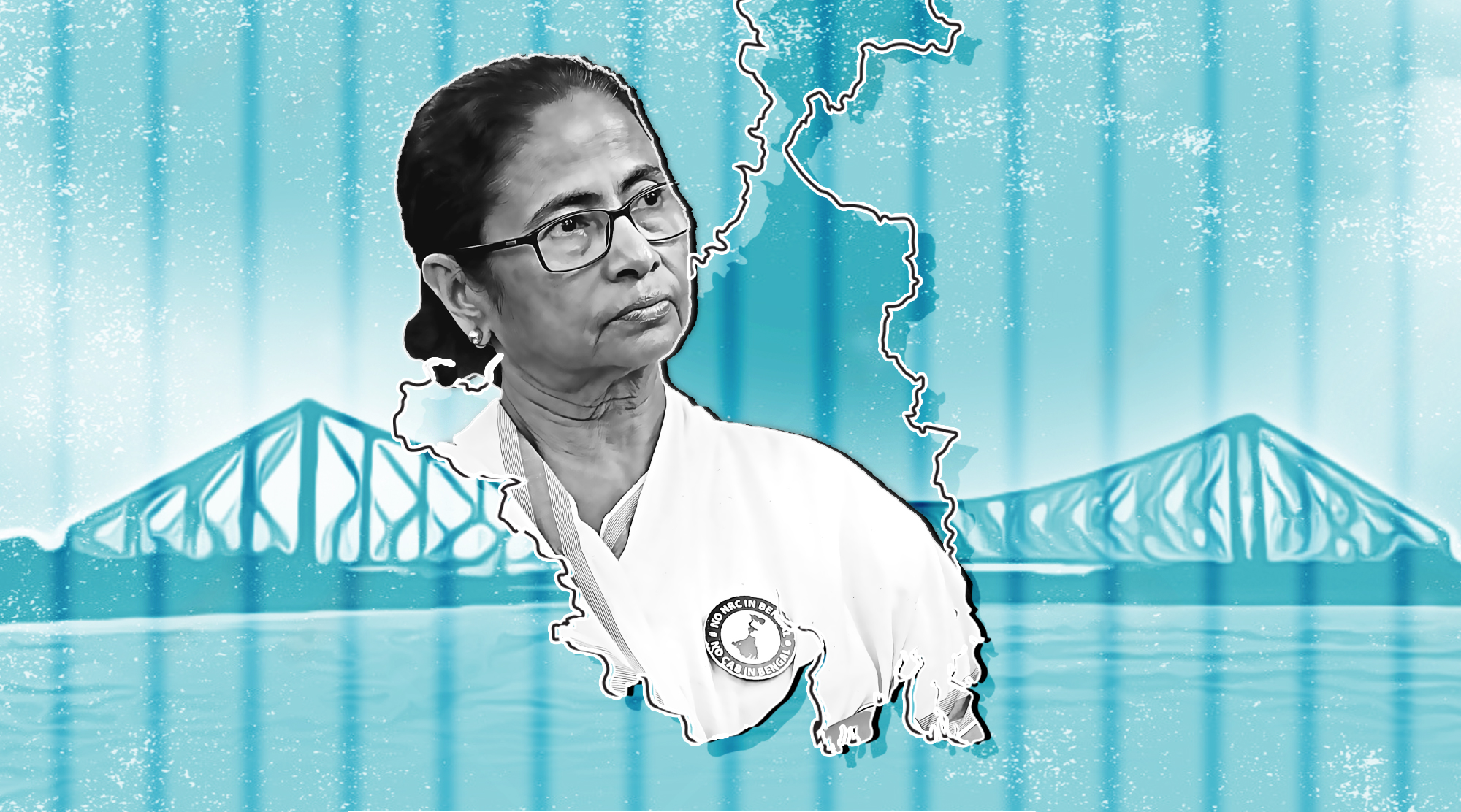 Ahead of the Legislative Assembly elections in West Bengal, the Bharatiya Janata Party (BJP) and the All India Trinamool Congress (TMC) have intensified their political campaigns. The BJP, which has never won an assembly election in the state, has been propagating a narrative that paints the Mamata Banerjee-led TMC administration as a failure.

One allegation that the BJP has repeatedly raised centers on the rise in crimes against women in Bengal. Questioning Banerjee's leadership, the party's top brass has spoken about women's safety at multiple campaign rallies and made it one of its key themes while campaigning in the poll-bound state. While addressing the public at the Poribortan Yatra rally, BJP Chief JP Nadda claimed that Bengal tops the list for the highest number of crimes against women. According to Nadda, such crimes include domestic violence and human trafficking. BJP spokesperson Sambit Patra reiterated the same claims through his Twitter account.

To find out whether crimes against women have soared under Banerjee, we decided to fact check five of the claims that have been promoted by the BJP. For this, we reviewed crime statistics from the National Crime Records Bureau (NCRB), a central government agency.

Statements by BJP leaders against the TMC

Though we found that three out of five claims by the BJP were partly true, all the claims were taken out of context and failed to provide a complete and accurate depiction of the state of crime in West Bengal.

How is crime measured?

The official and only source of crime statistics in India is Crime in India, a report published by the NCRB. At the end of every year, the NCRB collects data from the State Crime Records Bureau (SCRB) and compiles it for each state. The report consists of a summary and data for a range of crimes. The statistics for each state and city include:

Limitations of the NCRB

Over the years, the Crime of India report provided by the NCRB has faced mounting criticism, with organizations such as the TATA Institute of Social Sciences and news outlets such as Scroll reporting the data “presents an inaccurate picture by counting only police cases and not complaints.”

Firstly, there is the problem of under-reporting. India’s crime is counted when the police lodge a formal complaint, known as the First Information Report. 99 percent of sexual assault cases in India are not reported, according to the Quint. Some studies have found factors including economic disadvantage, demographics, and the perpetrator and the victim's relationship influence crime reporting. As a result, the figures may vastly differ from actual number criminal incidents and may not accurately represent a state’s level of crime.

The second issue is with how crimes rates are measured. From 2012 to 2017, the projected population for calculating the crime rate against women used the 2001 census. But for crimes against Senior Citizens, Scheduled Caste and Scheduled Tribe, the NCRB used the 2011 census. This practice leads to ambiguous figures.

Lastly, the NCRB follows a methodology of “Principle Offence Rule” in that when offenders commit multiple crimes, the Bureau only counts the crime that results in a maximum penalty. This practice can result in concealing the actual reported cases, thereby impacting crime measurement. So, it is crucial to take crime data with a pinch of salt, as the concluding results may not be an accurate measure of crime.

To discern the full impact of crimes against women under the TMC administration, we decided to review the crime figures from the years 2012 (the year after Banerjee was elected) to 2018. This is because West Bengal did not submit data in 2019, and the 2020 data is yet to be published.

While accusing the TMC government of not doing enough to ensure women’s safety in the state, the BJP looked at reported cases to measure crime — something that is a largely misleading method.

First, reported cases change with a varying population — the larger the populace, the more crime incidents may occur.

Second, not all crime incidents are reported. Consequently, it is crucial to note that reported cases may not accurately depict crime. According to NCRB, the crime rate is a more reliable indicator of making a state-wise comparison. For the sake of accuracy, we studied both the reported cases and the crime rate. We also analyzed cases of domestic violence, rape, human trafficking, and child marriages for every Indian state from 2012 to 2018, and statewise data on overall crime against women between 2012 to 2018.

To rank women's safety in each state, we calculated the rolling average of the top five state's reported cases and crime rates across different crime categories from 2012 to 2018.

But the average domestic violence crime rate stood at 42 per one lakh, second place to Assam. Although West Bengal's average was more than the national average of 18.38, the state saw a 20 percent fall from 2012 to 2018. BJP's claim of West Bengal leading in domestic violence cases remains true, although it fails to mention the decline in reported cases under Banerjee's government. 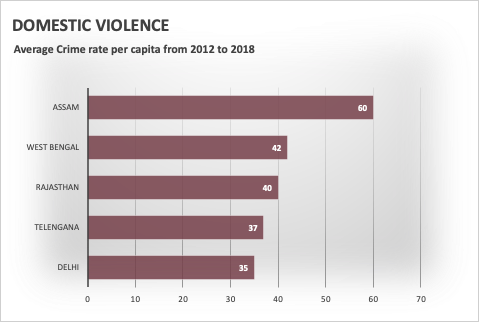 Rape: On cases on sexual assault, Patra tweet that West Bengal recorded the second-highest number of reported rape cases was shared by over eight hundred times and liked by more than four thousand users.

However, with an average of 1,380 reported rape cases and a crime rate of 3 per one lakh residents between 2012 and 2018, West Bengal was not the second-highest in number. In fact, Bengal did not fall in the top five states of rape offences. In fact, reported rape crimes in West Bengal decreased by 47 percent and the crime rate plunged 50 percent between 2012 and 2018.

West Bengal’s average crime rate was below the national average of 5.46. Delhi accounted for the highest rape offences per capita at 17 per one lakh of the population.

The BJP's claim regarding the second highest rape cases in West Bengal is false. Rape and sexual assault have been significant issues in India, and making misleading claims about it for political gain is both inappropriate and insensitive.

Our findings revealed that West Bengal had the highest average human trafficking cases. However, Patra's claim fails to present an accurate account considering the significant drop in reported cases under Banerjee’s leadership. Therefore, the overall claim is misleading.

The BJP has consistently alleged that there has been a rise in crimes against women under the current Bengal government. The national general secretary of BJP, Kailash Vijayvargiya, claimed that women's safety was the "worst in Bengal when compared to other states.”

To fact check this claim, we studied the overall crime statistics against women in each state between 2012 and 2018.

According to our findings, West Bengal is not the leading state in overall crimes against women, and the BJP's claim is false.

Throughout the election campaign, significant attention has been focused on pursuing women voters. The TMC has been using an election slogan, "Bangla Nijer Meyekei Chaye," which translates to "Bengal wants its own daughter." The BJP's top brass, Prime Minister Modi and Nadda, have frequently accused Banerjee of performative allyship towards women.

With respect to reported crimes, the BJP is partly correct in its claims. Three claims by the BJP hold true: West Bengal has the most domestic violence cases; has the highest number of human trafficking cases, and is also the third highest in child marriage cases. Two claims by the BJP are false — West Bengal is not the leading state in overall crimes against women; It does not have the second-highest rape cases. However, the NCBR considers the overall crime rate per capita a better yardstick to measure crime. This is because reported cases will vary by population: a very populous state like West Bengal will have a higher number of reported cases one with a lower population. Based on this use of reported cases rather than proportional crime rates, the BJP’s claims are misleading.

Our analysis shows that making state-wise comparisons based on reported crimes is unreliable. In the current political scenario, politicians are adept at framing their political campaigns and using media technologies as a direct channel of communication with the citizenry. While such a practice can lead to an engaged public, it may also distort electoral information.

As of March 27, the 2021 West Bengal Legislative Assembly Election, which is to take place over four weeks and in eight phases, is underway. Unsurprisingly, misinformation about the parties' respective candidates has already been circulating on...