The Death of an Icon and a False Flag Operation

Social media manipulation is on the rise in India, particularly that of a political nature. Cataclysmic news events make the perfect foil for storms of bots and hashtag manipulation to exert pressure on political opponents, and the passing of one of Tamil Nadu’s most prominent politicians has proved to be such an event. The death of Jairam Jayalalithaa, six-time chief minister of Tamil Nadu and premier of the All India Anna Dravida Munetra Kazhagam (AIADMK) party in 2016 left the party leaderless and with a considerable vacuum in Tamil Nadu’s politics. She was the formidable matriarch of the party and was commonly referred to as ‘Amma’ (mother) by her followers. The party faced a succession battle - splitting it into two factions. Who would rightfully assume Jayalalithaa’s position? Would it be her closest aide Sasikala, or incumbent Deputy Chief Minister O Paneerselvam who had taken the reins on numerous occasions during Jayalalithaa’s court cases and arrests for corruption allegations?

On the intervening night of December 5 and 6 in 2016, a few hours after Jayalalithaa’s death, Paneerselvam swiftly took oath as Chief Minister, before resigning nearly two months later citing “personal reasons”. Ready to form the government as Tamil Nadu’s new head, Sasikala officially took over as the general secretary of the AIADMK on the day of his resignation. As many grew suspicious since Sasikala had never wielded such political influence in Jayalalithaa’s time, Governor C Vidyasagar Rao put her plans on hold. Led by one person for decades, there was now significant distrust within the party. Rumours and conspiracy theories surrounding the death of Jayalalithaa only made matters worse.

A mystery or a fact of life?

Jayalalithaa was first admitted to Chennai’s Apollo Hospital in late September 2016, complaining of a fever and dehydration. Her hospitalisation led to a media frenzy with regular updates from Apollo sharing daily bulletins of her condition with the public. Although the bulletins earlier suggested the former chief minister was recovering, even sending messages to the public, a panel of doctors treating the 68-year-old clarified that she suffered from acute diabetes which led to organ failure and eventually a cardiac arrest - sparking rumors and speculations on the “real reason” behind her death. The doctors’ dismissals of various claims including poisoning or having been pushed down the stairs fell on deaf ears. The Week magazine’s in-depth explainer around her death was also unsuccessful in dispelling these conspiracies.

Amidst such speculation and minor tussles within the AIADMK, Paneerselvam in a dramatic move at Jayalithaa’s memorial in February 2017 said that he was forced to resign as the chief minister and that other party members urged Sasikala to take over instead. He also took credit for being the first one to raise suspicions around the death of the former chief minister. As the battle for power within the AIADMK erupted; further being fueled by attempts to shroud Jayalalithaa’s death in mystery, Saskila was sentenced by the Supreme Court for four years under a disproportionate assets case just seven days later. Although the party appeared to have resolved its internal power struggle with Edappadi K Palaniswami taking over as Chief Minister and Paneerselvam becoming his deputy, calls to investigate the former chief minister’s death were relentless.

Ultimately, the Tamil Nadu government set up a one-man panel, A Arumugasamy commission to investigate the death of the late Chief minister in August 2017. The Commission was given three months to complete its findings but has since received 9 extensions examining more than 100 witnesses as of March this year. This is owing to the stay orders from the Apollo Hospital over its staff being interrogated and several adjournments since Paneerselvam has not responded to summons despite being an instrumental figure for the commission’s set up.

Tamil Nadu goes to elections next week and the opposition the Dravida Munnetra Karzhagham (DMK) has tried to use this void and rivalry within the AIADMK for their own ends. DMK party president and leader of opposition M K Stalin on several occasions has brought up the delay of the Arumugaswamy commission and has used the lack of effort on part of the government to ensure smooth functioning of the commission as an election issue. The DMK’s poll promise is to expose those who have killed Jayalalithaa. Even actor-politician Kamal Haasan’s Makkal Needhi Maiam (MNM) stated in its resolutions that “people have a right to know the truth about what happened.”

Kalaignar TV, launched in 2007 in the honour of DMK leader M Karunanidhi, aired a clip on the trending hashtag on Twitter the same day. The Tamil news anchor said:

But among AIADMK's true volunteers, the fire over Jayalalithaa's death is still burning. As today is the death anniversary of Jayalalithaa the #WhoKilledJayalalitha is becoming viral on social media. As the election approaches, the leaders of AIADMK are shocked to find that the voices of the party's true volunteers are against them."

Logically also observed a copy-pasta campaign on Twitter with the following images, that are now deleted. 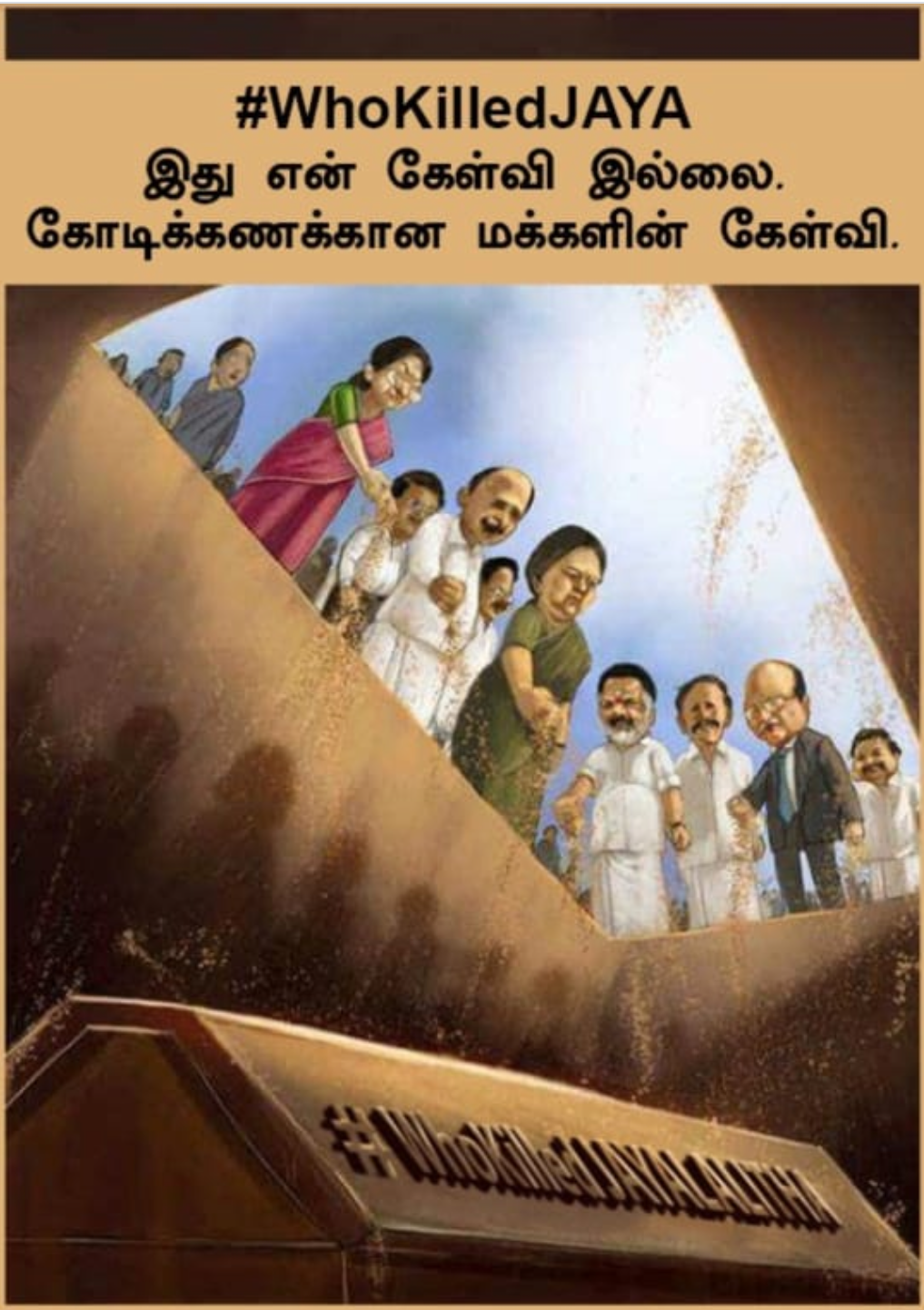 Translation: This is not my question, but the question of millions

Translation : What is the sudden reason for the disappearance of the nurse who treated Jayalalithaa?

Translation: What happened to the CCTV footage in the Chief Minister’s residence at Poes Garden?

Translation : How did the bloody specks (scars) on Jayalalithaa’s cheeks come about?

The BJP's support of the AIADMK has also led to conspiracies about the involvement of the central government.

The Kalaignar TV report suggests that some of the party workers within the AIADMK are still seeking answers to the death of Jayalalithaa.

We found that a majority of these tweets were being pushed by the DMK itself and along with other hashtags used by the DMK in Tamil such as  #admkfails, #stalinudtantn and

Death of a leader, a political tool

Jayalalithaa had a cult-like following; the people of Tamil Nadu worshipped her akin to a God. A temple in her honour was recently opened in the state. As a result, both the AIADMK and the DMK have been able to appropriate the sentiments around her death for their own benefit. The AIADMK, by setting up the Arumugasamy Commission around unconfirmed suspicions of her death to please her followers and the DMK by stating that the state government is deliberately stalling the process lest they be implicated.

With a 72.14 million population as per the 2011 Census, such social media manipulation in Tamil Nadu is on the rise and increasingly consequential. The DMK’s false flag operation is not only harmful but also violates Twitter’s terms of service.

A lot has changed since 2016, Jayalalithaa’s closest friend Sasikala was released after serving her four year sentence in the disproportionate assets case earlier this year. Her release was rife with speculation about her contesting elections till she eventually announced that she is not going to participate in politics. After steering clear of the Bharatiya Janata Party (BJP) during Jayalalithaa’s time in power, the AIADMK has partnered with the national party, and the DMK is fielding an aggressive campaign against the alliance while playing into the Dravidian sentiments of welfarism, rationalism and strong hold on Tamil roots. As for Tamil Nadu, they may have lost Amma, but she continues to be a talking point for the upcoming state elections both within her party, and among her rivals.

On September 29, at nine p.m. Eastern Daylight Time, Logically’s fact checkers sat at their respective desks, their drinks of choice at their side and ninety minutes of quiet focus stretching before them. The evening was an auspicious one: the...