Conspiracies on the Couch 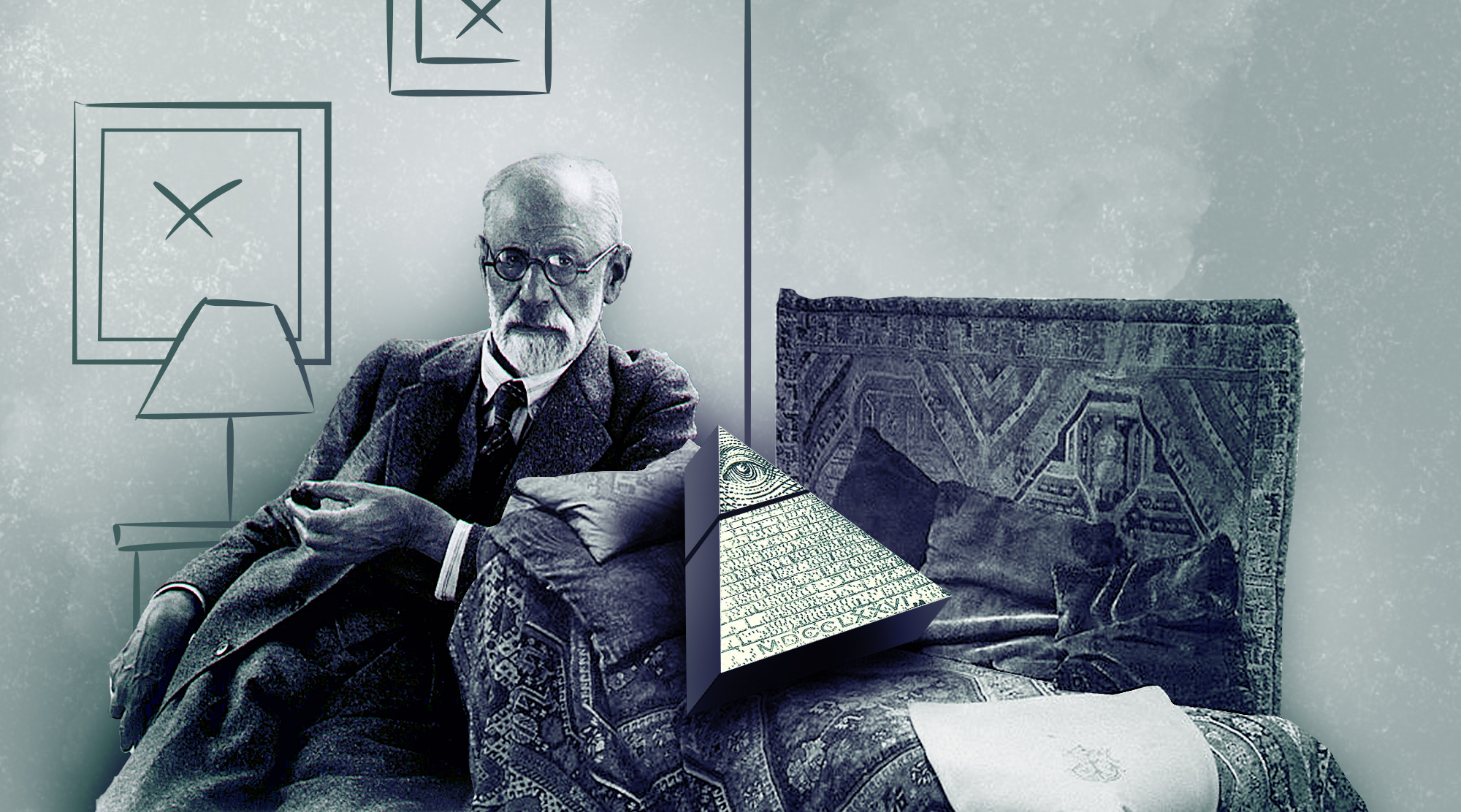 One night in July 1895, Sigmund Freud – then an obscure Vienna neurologist interested in hypnosis and how sexuality was determined by nose-associated “biorhythms” – had a particularly consequential dream.

The dream revolved around a patient called Irma, who Freud was treating at the time for “hysteria”. Irma’s treatment was not going completely to plan: and on the previous day, he had had a frustrating discussion about her with a junior colleague, Otto, in which he felt as if the younger man was criticizing Freud’s course of treatment. In the dream, Freud was hosting a great party for numerous guests – one of whom turned out to be Irma. The dream-Freud took the dream-Irma aside and told her: “If you still get pains, it’s really only your fault.” Her reply came, “If you only knew what pains I’ve got now in my throat and stomach and abdomen – it’s choking me.”

Suddenly, the dream-Freud realized that Irma looked horribly physically sick, that her problems did not stem from her neuroses, and were in fact being caused by a physical ailment. Examining her throat, which he noted that she opened properly for the first time, Freud saw big white patches. Otto arrived, accompanied by two more senior colleagues, to help with the inspection. Led by Freud, the team of doctors diagnosed an infection, which it turned out had been caused by Otto thoughtlessly giving Irma an injection of some sort of acid, using a dirty syringe. But it was all going to be OK. Soon, “dysentery would intervene, and the toxin will be eliminated.”

In analyzing this dream, Freud reached a conclusion, one that he would go on to outline and defend in his first mature work on psychoanalysis, The Interpretation of Dreams. To understand this dream, or indeed any other, Freud claimed, what we must understand that “a dream is the fulfillment of a wish.” When we dream, we are given by our somnolent mind an image of how we would like reality to be.

With some dreams at least, this point seems pretty straightforward. Freud cites dreams his children have told him about, for example, where they are being given chocolate by their mother, or getting to visit the top of a mountain when they are on holiday. He also mentions “dreams of convenience” where one dreams that one is already out of bed and accomplishing all the boring tasks one knows one will need to do during the day, without ever having to actually wake up and get out of bed.

In the case of dreams like Irma’s Injection, however, things are a bit trickier. After all, nothing about what happened in it can have been actively pleasant for Freud’s dreaming mind to experience. But this is where the work of psychoanalysis comes in. By breaking the dream down to its core elements, Freud came to realize that in the dream, he saw the fulfillment of his wish that he should be off the hook for getting Irma’s treatment wrong, that in fact her ongoing problems were the product of a physical ailment, caused by Otto, which he hadn’t noticed because she wouldn’t let him inspect her properly, and that if Freud simply waited and did nothing, the underlying cause would be cleared up and everything would be fine.

Naturally, Freud was aware that some would object to this theory. Some dreams, for instance, are more than simply unpleasant: they show us something that we actively do not want to happen. Freud cites the example of a dream one patient of his had, where she saw her nephew, Karl, lying dead in a coffin. But when we look into what is going on beyond the surface, we can see what the dream really means: the patient, it turns out, had also had another little nephew, a boy named Otto, who she had lived with before his death – Otto had been her favorite. It was also the case that while she had lived with him, she had been courted by a professor who she had last seen at Otto’s funeral. The dream of Karl’s death could thus be understood as motivated by the desire to see the professor again, since if Karl’s funeral were staged he would be bound to show up – as well as having the bonus of swapping the patient’s living nephew for her late, favored one.

Besides which, in Freud’s picture of the psyche, our wishes are never entirely transparent and straightforward – even to ourselves. We don’t always think that we deserve to get what we want: there is, as he notes, a “masochistic” component in the psyche – we punish ourselves for daring to express, even subconsciously, what we believe to be our illicit desires. Freud cites, for instance, the example of a friend of his, who dreamt that he was arrested for infanticide while carrying a woman on his arm outside his home: the dream was linked to his ambivalent feelings about accidentally impregnating a married woman he was having an affair with.

Finally – as one last caveat  – Freud did concede that sometimes we may have dreams in which no discernable wish can be detected – for instance, a patient of his reported a dream in which she was being forced to go on holiday with her mother-in-law, who she detested. But this would only happen, he claimed, to people who’d been told about his theory of dreams, and didn’t like it: when they had only unpleasant dreams, nothing more, they were simply dreaming the fulfillment of their wish that he, Sigmund Freud, be wrong.

Of course, this last point is unfalsifiable to the point of parody. Indeed, Freud was famously one of Karl Popper’s (who coined the philosophical idea of unfalsifiability) great bugbears. But what I suppose I would say in reply to this is: while Freud was not able to give any sort of especially watertight evidence for the claim that every single dream we might ever experience is the fulfillment of a wish, his maxim is nevertheless a useful hermeneutic framework to adopt when considering the sort of mysterious, troubling dreams which might fall within the purview of psychoanalysis.

A Conspiracy Theory Is The Fulfilment of a Wish

All well and good, perhaps. But why am I telling you about this? Well, it is my view that, whatever we might think about its ultimate uses when it comes to analyzing dreams, Freud’s maxim can nevertheless be usefully re-tooled to help us make sense of conspiracy theories.

What dreams and conspiracy theories alike provide us with is a sort of riddle – the riddle Freud asked of his dreamers. Just why would someone think this, anyway? How do they want reality to be, if they’re making this sort of claim about how it is?

If you are (or were) a QAnon believer, then you are unlikely to want the world to be run by a shadowy cabal of elite pedophiles who worship the devil. But it might be comforting to believe that all your various grievances and failures to date can be blamed on the fact that it is – this might be thought preferable to confronting the actual reality we exist in, in all its tragedy and complexity. And of course, it must be comforting to think (or to have thought) that all of the present evil was about to be finally exposed, and eliminated, by Donald Trump.

Similarly, consider what is perhaps the ur-conspiracy theory, the suggestion that the Kennedy Assassination was planned by some group of persons (the mafia, the Cubans, the CIA…) and not by Lee Harvey Oswald acting alone. There is something very troubling about the idea that Kennedy was assassinated by, say, some reactionary element in the U.S who then covered it up. But there is also, at the same time, something comforting because it would mean that events like this are never random – that they are controlled by shadowy forces beyond your or anyone else’s control, and that even if you were able to uncover what they were up to, you could never actually fight them.

A third example we could cite would be “Russiagate” – the liberal centrist version of QAnon. Again, the positing of a troubling conspiracy (that American democracy is being controlled by Vladimir Putin), can be used to help conceal an even more difficult reality (the knowledge that the American people themselves, such as they are, actually voted for Donald Trump – that Trump was always a threat internal to the ostensibly ideal American “shining city on the hill”). The fact that it is Russia doing the controlling here (as opposed to a polity which is actually the sort of global power which might plausibly threaten American hegemony, e.g. China) is also significant, from a Freudian perspective. For Freud, the split nature of our psyches arises at least in part from how we respond to the injunctions our parents place on us during childhood. Over time, these injunctions become sedimented as the superego: the voice of the father that poses as our conscience. We can thus never completely escape the past, even in a radically transformed present – a notion apparently proven in the figure of the Russiagate conspiracy theorist, for whom the Cold War never ended.

Of course, the riddle is unlikely to be answerable the same way for every believer of a given conspiracy. Conspiracies like QAnon, or the set of theories surrounding the Kennedy Assassination, or by no means any one united thing. But hopefully what I have said here seems plausible, and can prove useful. Often I think we approach conspiracy theories too much as if they are something like (a sort of defective version of) a scientific, or I guess sociological, theory of reality. But it might be more productive to think of them as pure expressions of fantasy, of desire: shared, waking dreams.

Who Counts the Counters? Conspiracies About the Census

When the smiling census enumerator comes to your door every ten years (or, in some countries, five), do you accept your task willingly or balk at the hassle and threat of fines? Are you happy to be counted or suspicious of what the government might...