Communities of Color Are Fighting Back Against Online Vaccine Misinfo

A month ago, I finally got my second dose of the Oxford AstraZeneca vaccine. As a health professional who has been deployed to the frontline since the start of the pandemic, this not only offered some hope to break the endless cycle of loss and uncertainty but also some personal relief. It felt strange returning to my old trust in East London as a patient, seeing all my former colleagues still going through the brunt of it all. Prior to administering the final dose, the nurse asked me the routine mandatory questions, from the state of my health to confirming my lack of allergies. But one question stood out: “Would you like me to take your picture or a video to document this moment?”

This last question surprised me, as I had not encountered this during my training but it had now apparently been absorbed into practice. When I was administering vaccines at the same trust, after answering general questions from members of Black and Southeast Asian communities, they often requested my help in taking pictures or short videos. These requests were usually followed by justifications. “I’m taking this to show my mum it’s safe and she should have it as well” or “my grandfather refuses to have it, so I need to show it would not cause harm to him.” Other justifications included documenting the procedure for what it was – a simple jab – to eliminate and reassure against fears of the unknown.

These images and videos rapidly circulate across social media platforms like Twitter, Instagram, and WhatsApp. While more than 40 million doses of the COVID-19 vaccine have been administered in the U.K., a persistent obstacle is vaccine hesitancy, especially in Black, Asian, and other minority communities.

Ongoing headlines continue to emerge in the news about how vaccine hesitancy has seeped into the social fabric of various minority communities, which has been perceived as the reason for sustaining the disproportionate effects of COVID-19 on these communities.

Those who are vaccine hesitant are not the same as anti-vaxxers. They are not starting from the position that vaccines are dangerous; there is still room for them to be assured of the vaccines’ safety, efficacy and necessity

A Scientific Advisory Group for Emergencies (SAGE) report found that the rate of hesitancy was highest in Black ethnic groups, with 72 percent in these groups stating that they were unlikely or very unlikely to get the jab, followed by people from Pakistani and Bangladeshi backgrounds. The genuine concerns that characterize vaccine hesitancy — namely uncertainty about how vaccinations actually work — underscore the failure of the state and public health bodies to suitably and sensitively engage with minority communities. What is often misunderstood is that those who are vaccine hesitant are not the same as anti-vaxxers. They are not starting from the position that vaccines are dangerous; there is still room for them to be assured of the vaccines’ safety, efficacy and necessity.

But the way the idea of vaccine hesitancy among minority communities is often expressed oversimplifies the many reasons that underlie their concerns, not least because the idea of “hesitancy” shifts responsibility from those in power to those in minority groups without accounting for a health system that has allowed systemic biases to endure within it. These biases, health inequalities, and how they contribute to vaccine hesitancy have not been sufficiently unpacked, and few have addressed the ways that persisting health inequalities might be responsible for mistrust in the vaccination program. COVID-19 has magnified these inequalities not just in access to healthcare, but in access to information. Social determinants of health such as socioeconomic status, education, residential segregation — all of which are influenced by systemic racism — affect health and accessibility to resources. With only one-fifth of Black, Asian, and minority ethnic households in the U.K. pursuing further education, health misinformation is disproportionately detrimental to these communities. There are other perfectly good historical reasons many of these groups might feel distrustful of institutions, particularly medical ones. They have not always been treated fairly.

The government has employed key public figures, including ministers and “COVID-19 influencers,” to encourage and appeal to the allegedly “hesitant” groups through various forms of digital and media campaigns such as the #TaketheVaccine campaigns. Celebrities and community champions have been plastered on our screens and social media platforms. A video made by Black MPs from both the Conservative and Labour parties detailed the impact of COVID-19 in their lives and the loss that they’ve endured in a united effort. The government has provided a SHARE checklist to hold people accountable for the role they play in sharing harmful content as part of their Don't Feed the Beast Campaign.

This active campaigning doesn’t stop there. Many of us observed a recent TV broadcast screened on all major channels including Channel 4, Channel 5 as well as all Sky TV channels featured personalities such as Denise Lewis, Romesh Ranganathan, and David Olusoga. The message was consistent with other government-backed campaigns, and once again urged people to get vaccinated. Yet these campaigns can feel limited in their attempts to target minority communities. The risk is that such campaigns only amplify an echo chamber of the blanket condescending messaging that “the vaccine is safe,” without properly addressing the concerns highlighted above.

The top-down approach can be part of the problem rather than the solution. A Reuters Institute report found that some people in the U.K are now more likely to turn to each other for information about the pandemic, a symptom of growing mistrust toward news organizations combined with less reliance on sources such as government authorities and health experts. Analyzing data from six countries, the report stated that U.K. respondents — particularly those with low levels of formal education — were the only ones who felt the media did not help them understand the crisis. In global public health, community organizing can act as a vehicle to unleash the collective power necessary to uproot the health inequalities faced by minority communities.

Minority communities were organizing among themselves long before the government realized that they needed a strategy to address low vaccine uptake. They did this using wider forms of digital media to center community voices in their campaigns including images, accessible videos in relation to language and speech barriers, WhatsApp broadcasts, podcasts, blogs, vlogs, webinars, and infographics.

A group of doctors, students, translators working together as COVID-19 Infographics provide another example of community mobilization against vaccine misinformation. This collective creates accessible, reliable resources on COVID-19 in multiple languages, beyond European languages. This is also replicated in videos made by young health professionals from South East Asian communities and religious leaders affiliated with organizations such as AskDoc, speaking about community concerns and hosting sessions to deal with them, one by one in their native tongue. Translated content being made widely available on social media means easier access and distribution. 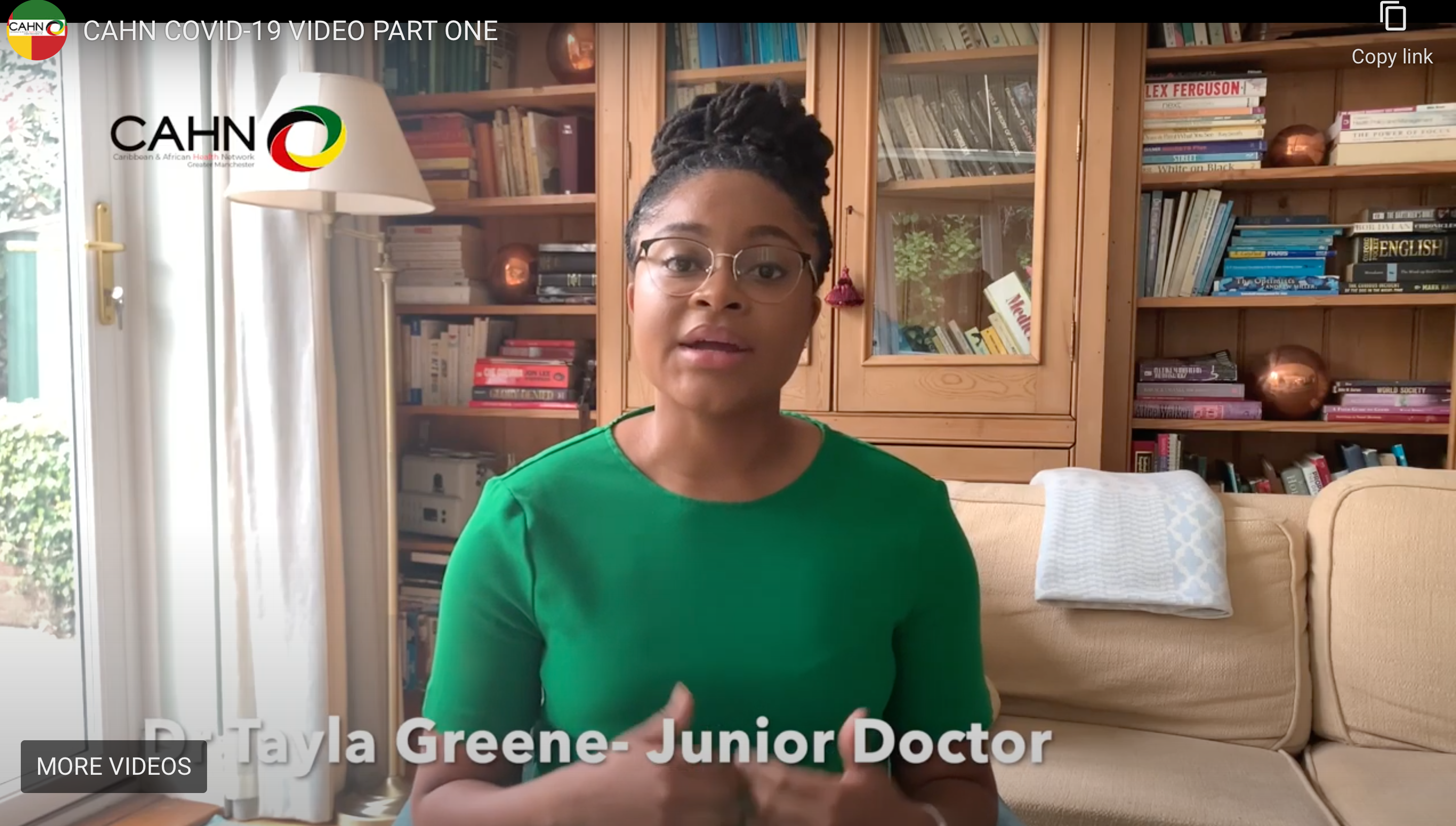 Dr. Tayla is from the Caribbean and African Health Network

Meanwhile, medical leaders from minority communities such as the African and Caribbean communities initiated collaborative efforts with important grassroots organizations such as the Caribbean and African Health Network to encourage vaccine uptake. These campaigns addressed most of the key concerns highlighted around safety, ingredients, side effects, and accessibility needs. They sought to inform and persuade, not to criticize and condescend. These community-led initiatives are important in promoting public health information to millions of people, especially from minority communities cautious about getting the vaccine. But as a form of one-way communication, they may not reach everyone. Additionally, they do not address the logistical issues affecting the accessibility of the vaccine. This includes vaccination center locations, digital poverty and booking appointments, working hours and the ability to take some time off, finding childcare, paying for transportation costs, and migration status.

This prompts the question, who should take the lead in containing medical misinformation? The government or members of minority communities? For many, having the choice to either take or reject medical aid is empowering. Using community assets to mobilize a bottom-up approach sustains this autonomy. However, vaccine agency is only effective if minority communities also challenge anti-vaxxers and their sources as vigorously as they challenge the government and its scientists.

The images I was asked to take were the initial acts of resistance these communities chose to display. On my own social media platforms, I saw an intergenerational trend of people from Black, Asian, and Roma communities sharing the image of themselves, after vaccination. Even though it is said that a picture is worth a thousand words, those words will be influenced by the context and the experience of those viewing them. Some images are powerful enough to stand on their own, but these vaccine selfies are part of a story in which actions and experiences need to be documented, the context defined, and the implications for health laid bare. For people from these communities, these images seek to normalize behaviors and provide a visual reality that can demystify the unknown.

A lack of confidence in the government enables the breeding ground for less reputable sources to create and spread misinformation about the COVID-19 vaccine. It is important to ensure that the low levels of uptake of the vaccine do not become a reason to victimize minority communities as the potential focal point of a lack of uptake and continued risk of transmission. Although there has been a delay in making strides in the right direction from the government in increasing funding to community initiatives, these funds should be used for a more carefully targeted approach with community voices. The vaccine “hesitancy” displayed by minority communities is intersectional, and the approach in addressing it should be too.

Beauty Dhlamini is a Global Health scholar with a particular focus on health inequalities. In her commitment to achieving universal healthcare coverage for all, Beauty is known for her advocacy work for marginalized communities sitting on several advisory and community boards, working with community and grassroots organizations, and co-hosting the renowned podcast, Mind the Health Gap.

Against the backdrop of the coronavirus pandemic, conspiracy theories seem to be undergoing something of a renaissance: 5G towers have been burned down, various cures have been touted, and eventually some people even started talking about the end...

Conspiracies on the Couch

One night in July 1895, Sigmund Freud – then an obscure Vienna neurologist interested in hypnosis and how sexuality was determined by nose-associated “biorhythms” – had a particularly consequential dream.

The dream revolved around a patient...