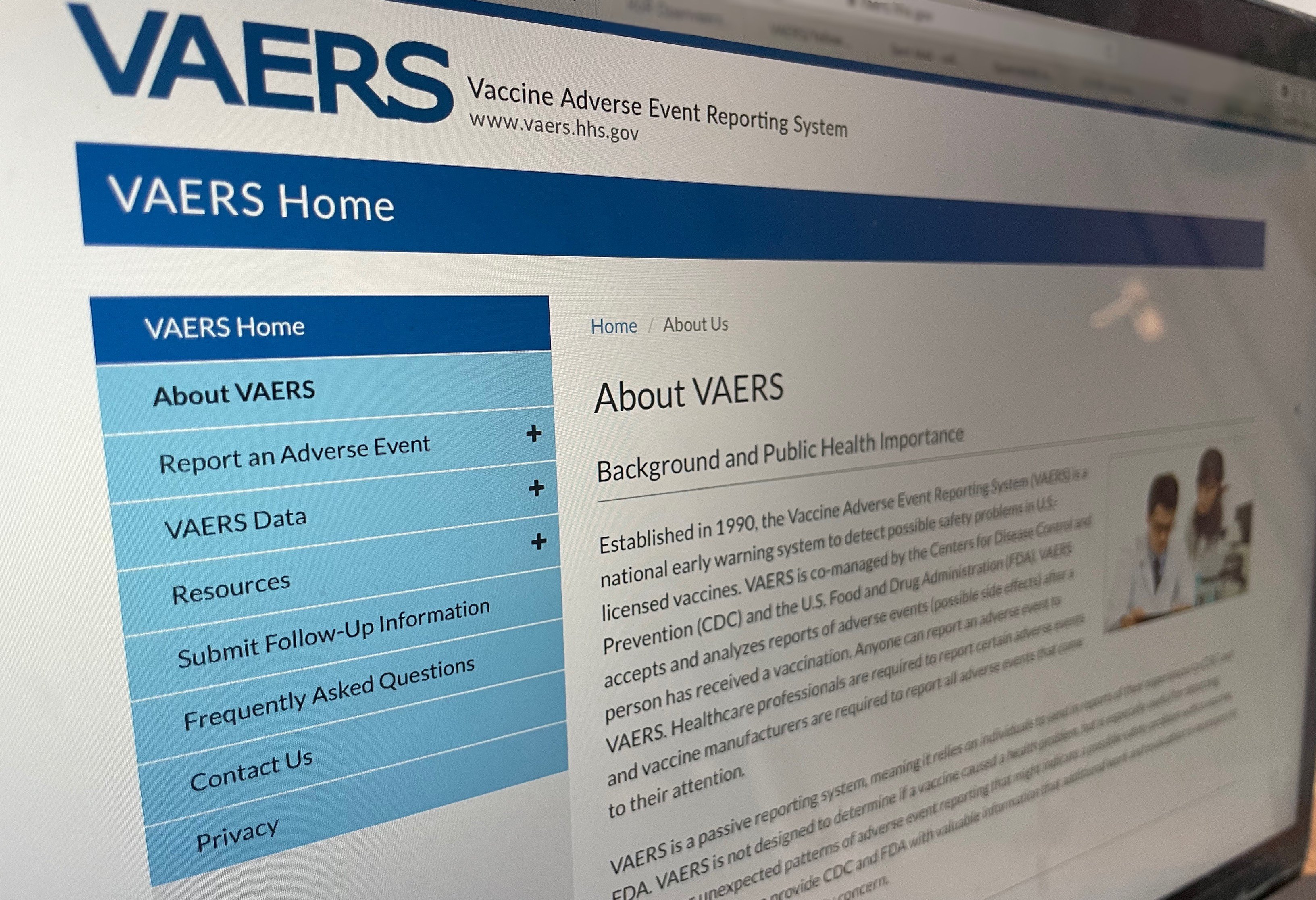 A Logically investigation can reveal that Lizabeth Pearl Willner, also known as Liz Willner, of Oakland, California, is behind the website OpenVAERS.

OpenVAERS is a U.S.-focused site that was created in January this year. The project used to live on thearkivist.net, which was created in September 2019, until its owner created a separate website dedicated to the misrepresentation of COVID-19 vaccine data. OpenVAERS repackages raw federal data from the official VAERS (Vaccine Adverse Event Reporting System) website to push an anti-vax agenda. The site misrepresents data collected on VAERS and publishes it in a way that has very likely made a significant contribution to vaccine hesitancy. The website publishes unverified data and statistics on how many people have allegedly died or suffered injuries after getting their COVID-19 vaccine. The site features a “red box summary page,” which shows misrepresented figures in large fonts. Social media users often share screenshots of this page on other sites like Twitter, TikTok, and Facebook, which see thousands of shares from the site every day. Although the site is less than a year old, more than 1.23 million people have visited the site in the past six months, with a substantial increase since July. Our research shows that 30 percent of OpenVAERS referral traffic comes from Gateway Pundit, a far-right website that often publishes fake news and conspiracy theories. Over 10 percent of the website’s referral traffic comes from Vernon Coleman’s website. Coleman is a conspiracy theorist who heavily promotes anti-vax narratives and pseudoscience.

Comparatively, the official government VAERS website has recorded 796.63k visits between February 2021 and July 2021. We found that almost 3 percent of the official VAERS website’s referral traffic actually comes from OpenVAERS.

The link to the OpenVAERS website has been shared over 20k times on Facebook with over 50,000 interactions over the last seven months, though this doesn’t capture the full impact of OpenVAERS on COVID-19 vaccine scepticism: as outlined above, many posts originating from the site consist in screenshots, which would not appear in data on how often OpenVAERS has been shared on platforms. 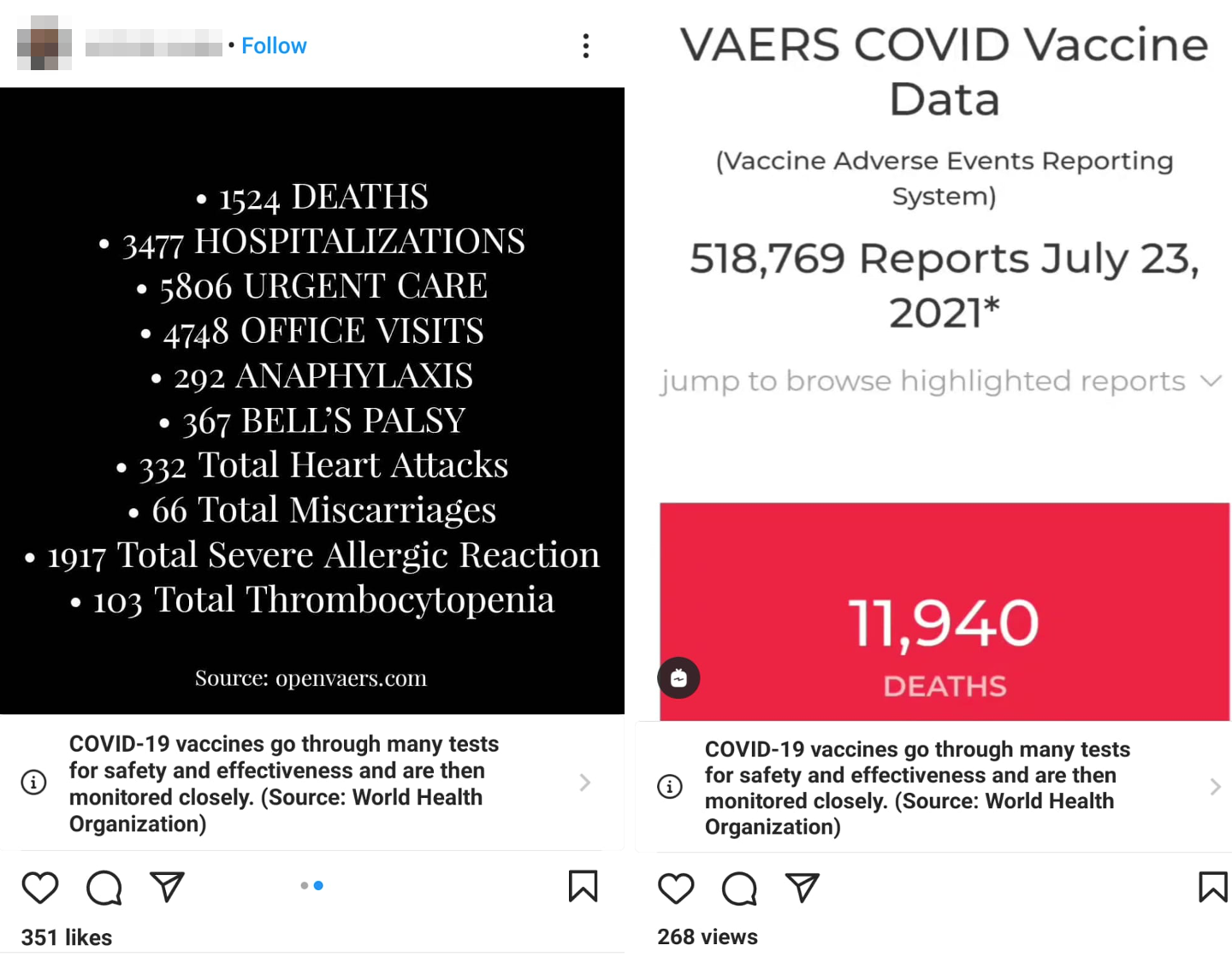 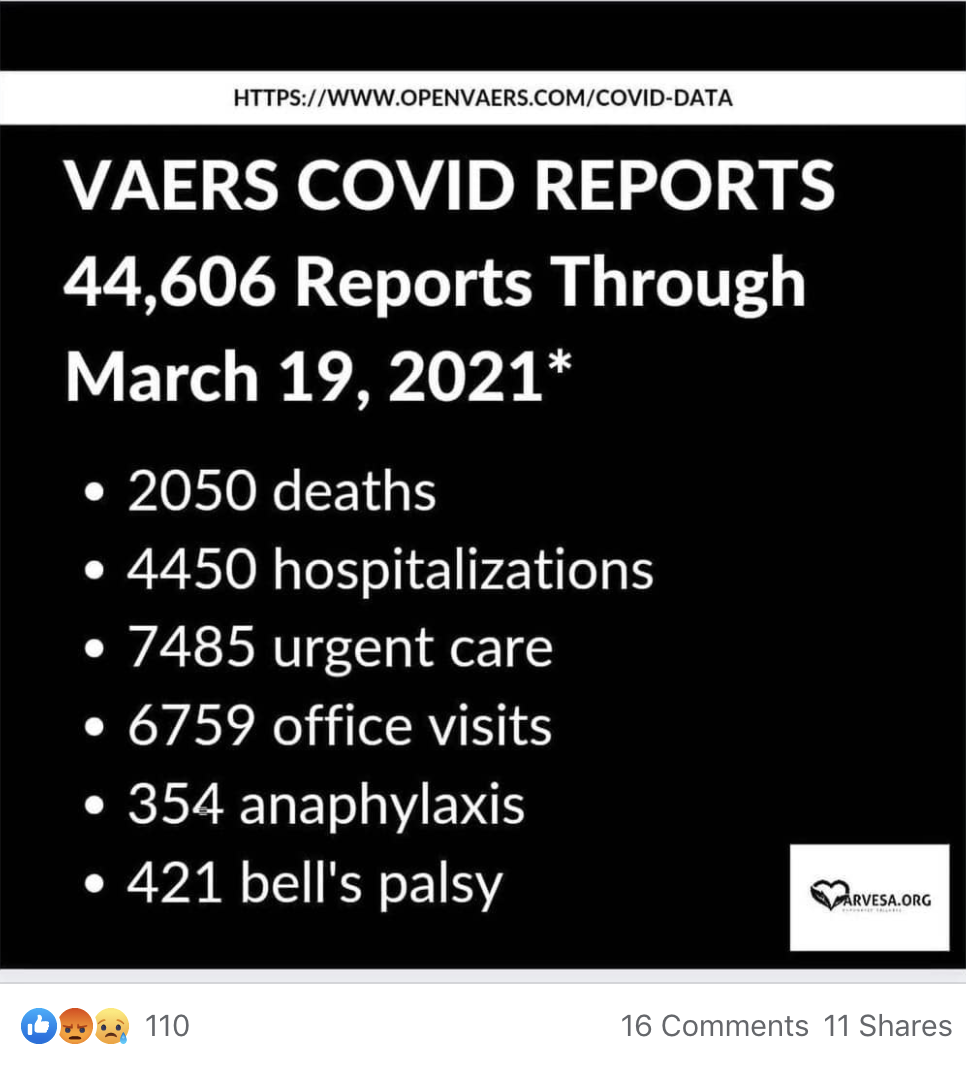 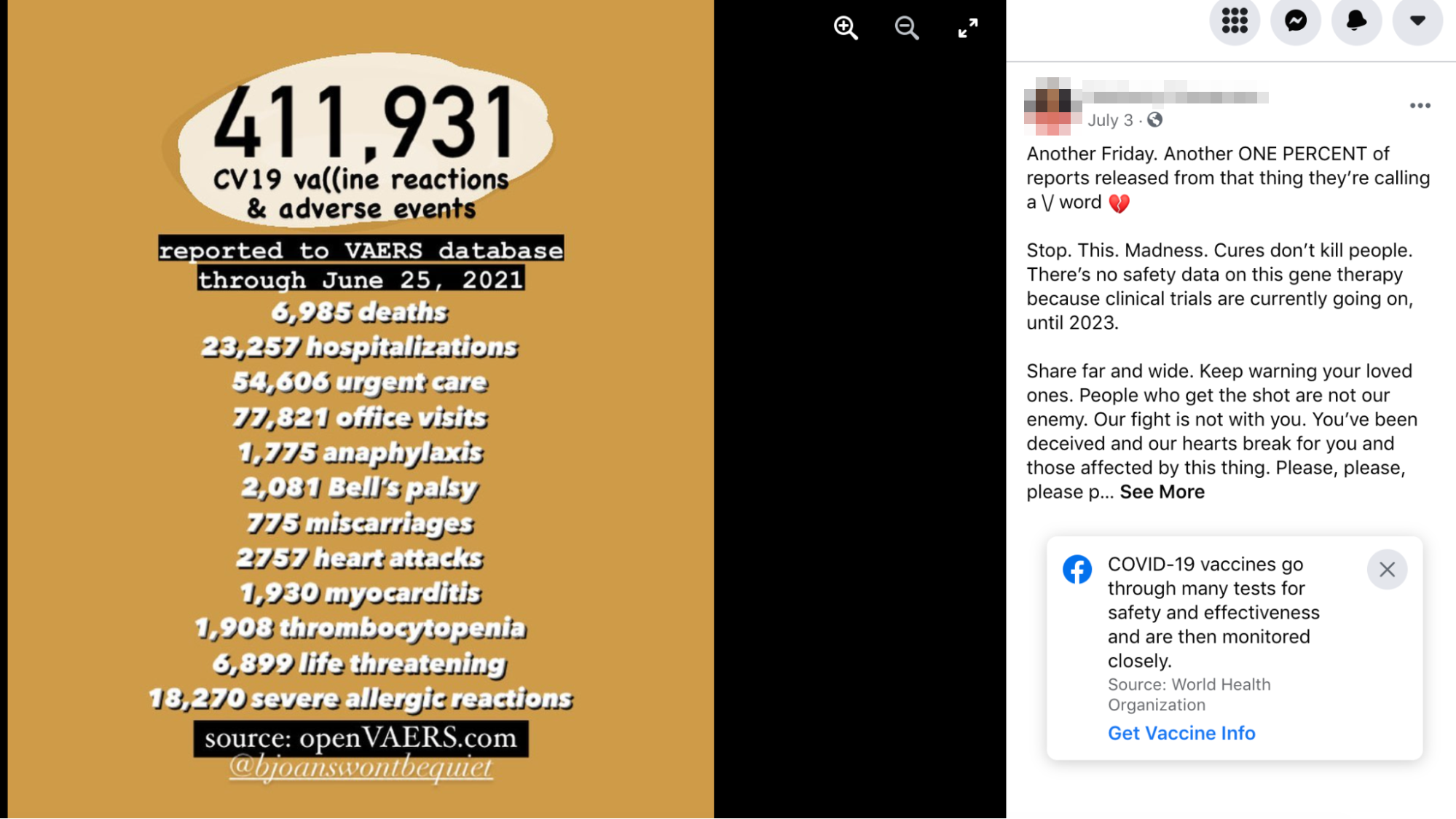 Misrepresenting VAERS data has become an important way for anti-vaxxers to spread misinformation about vaccines. They primarily succeed in doing so because, for many people, it isn’t immediately clear how VAERS works, or how its data should be interpreted.

VAERS was created in 1988 and is co-managed by the Centers for Disease Control and Prevention (CDC) and the U.S. Food and Drug Administration (FDA). The system was created “to detect possible safety problems in U.S.-licensed vaccines,” according to its website. While healthcare professionals and vaccine companies are required to make some reports, most records are self-reported. People are encouraged to report any adverse event that occurs after receiving or administering a vaccine licensed in the U.S., whether or not the user believes that the vaccine caused the adverse event. VAERS accumulates this raw data and makes it available for anyone to download on their website.

Since the VAERS data has not undergone any kind of independent verification or statistical analysis, VAERS’ website categorically states that the reports “may contain information that is incomplete, inaccurate, coincidental, or unverifiable. In large part, reports to VAERS are voluntary, which means they are subject to biases. This creates specific limitations on how the data can be used scientifically. Data from VAERS reports should always be interpreted with these limitations in mind.”

Since the data is raw and unassessed, VAERS’ website categorically states that the reports may contain information that is incomplete, inaccurate, coincidental, or unverifiable.

VAERS’ guide for interpreting their data states: “When evaluating data from VAERS, it is important to note that for any reported event, no cause-and-effect relationship has been established.”

However, websites such as OpenVAERS ignore the limitations in VAERS’ data and repackage this raw data to imply causation where none has been established. The website also posts summaries of reports submitted to VAERS. These summaries contain information like “when did they get the vaccine,” “what their post-vaccine symptoms were,” and also use a dot system to indicate who has passed away and who has recovered. However, these summaries are directly picked up from VAERS, and the information is not verified.

It is unclear exactly how many operators OpenVAERS has or whether Willner is the only person behind it. However, several tweets and Facebook posts suggest that she is one of the main operators behind the site and its likely founder.

The website also asks people to subscribe to their weekly “call to action” email. We received one of these by email, finding the newsletter to contain the same kinds of misrepresentations and misinformation as the site itself (the newsletter is also uploaded on the website). The newsletter claims it is “unethical” for President Joe Biden and Dr. Anthony Fauci to weigh in on the matter of the Pfizer vaccine to get full FDA approval, arguing that the process is political and not scientific. The newsletter further claims that a full approval would essentially create a version of the “Berlin Wall,” and lead to the unvaccinated living behind a “Pharma Iron Curtain.” The author also claims that full FDA approval would result in large-scale loss of life.

For the majority of the time the website has been operating, the data presented was missing essential context.

All these claims are unsubstantiated and essentially suggest that the Pfizer vaccine is unsafe, a claim which has been debunked repeatedly. To support their claims, the newsletter cites a couple of lawsuits that emerged in the last few years against Pfizer in a completely misleading manner. The newsletter also cites data from OpenVAERS to suggest that the vaccine is dangerous: “There are now 8,508 VAERS reports of fatalities following the Pfizer mRNA shot in the past seven months. Quite literally, the Pfizer mRNA shot has killed more people than any shot in the 30-year history of VAERS.” While 8,508 deaths from the Pfizer vaccine might have been reported to the VAERS website, the figure proves no connection between the vaccine and the subsequent fatalities.

Our investigation also shows that up until August 11, the red box summary page of the OpenVAERS website did not carry the essential disclaimer for how the data should be interpreted. Wayback Machine shows that this link was added on August 12, and the following the link takes you to a section on the OpenVAERS website which outlines HHS (United States Department of Health and Human Services) VAERS disclaimer highlighting strengths and weaknesses of the VAERS data, rather than the HHS or VAERS websites themselves. Additionally, the same link was added on the homepage of OpenVAERS on August 8, according to the data accessed through Wayback Machine. This means that for the majority of the time the website has been operating, the data presented was shorn of essential context.

​​From February 2020 to January 2021, OpenVAERS was hosted as a section on The Arkivist, a website that describes itself as “uncensored voices and news of medical freedom,” after which a site dedicated entirely to OpenVAERS was created. A closer look at websites resolving to the same IP as The Arkivist reveals potential connections to another site that was created by Liz Willner of Oakland California.

Further investigation revealed that Willner also operates the anonymous Twitter handle 1pissedoffmom1 (formerly lpwbones), one of OpenVAERS’ and the Arkivist’s most active promoters, regularly sharing anti-vaccine content since at least 2019 as well as links to both websites. On several occasions, the anonymous Twitter account makes claims linking vaccines and autism; on one occasion, the account even cites Willner herself as a source.

According to Willner’s posting history on Twitter and Facebook, her child suffered an injury following a vaccine. Willner began posting anti-vaccine content on Twitter in April 2019 and by the next month, she had already become vocal in her opposition to Senate Bill 276 in California, a piece of legislation that was introduced later that year to tighten vaccine exemption rules for children.

“A sibling of a child who has had a severe vaccine reaction would not be exempt,” she wrote in a tweet tagging California governor Gavin Newsom. “A family could have genetic predispositions and 4 children with vaccine reactions and not be able to exempt a 5th child.”

“And its (sic) about to get much worse when / if #sb276 passes,” she wrote in another. “My daughter will be kicked out of school. We will be forced to move or sue. All to satisfy Pan’s [California Senator Richard Pan, who proposed the bill] vendetta. Supermajorities do not make for a healthy republic.”

Willner’s campaigning around the California senate bill effectively prepared her for the onset of the pandemic, when she began investing her time in the OpenVAERS project, encouraging others to share the link to the site, as well as opposing lockdown measures imposed in California. It wasn’t until January 2021 however that Willner set up OpenVAERS as a dedicated website. 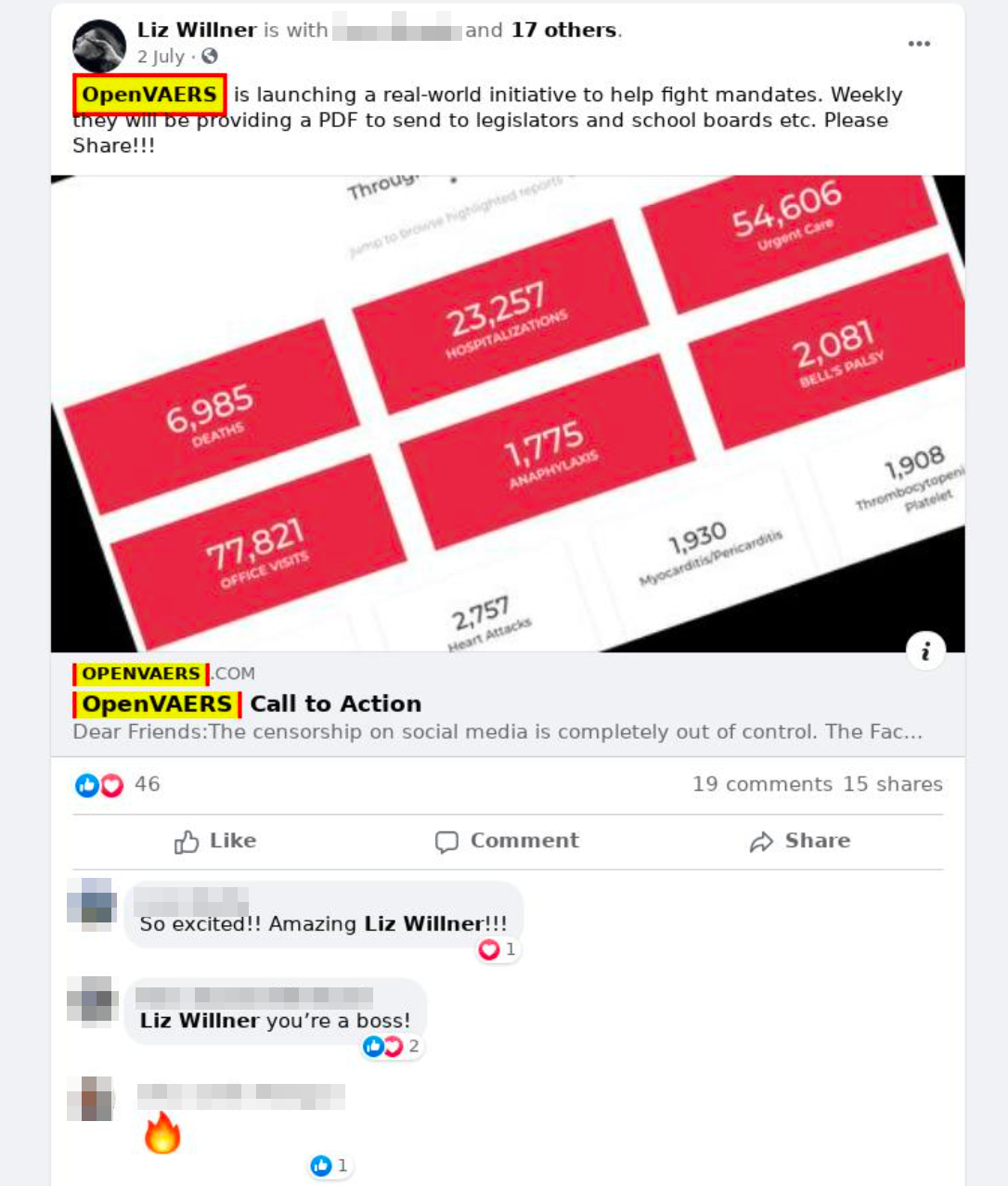 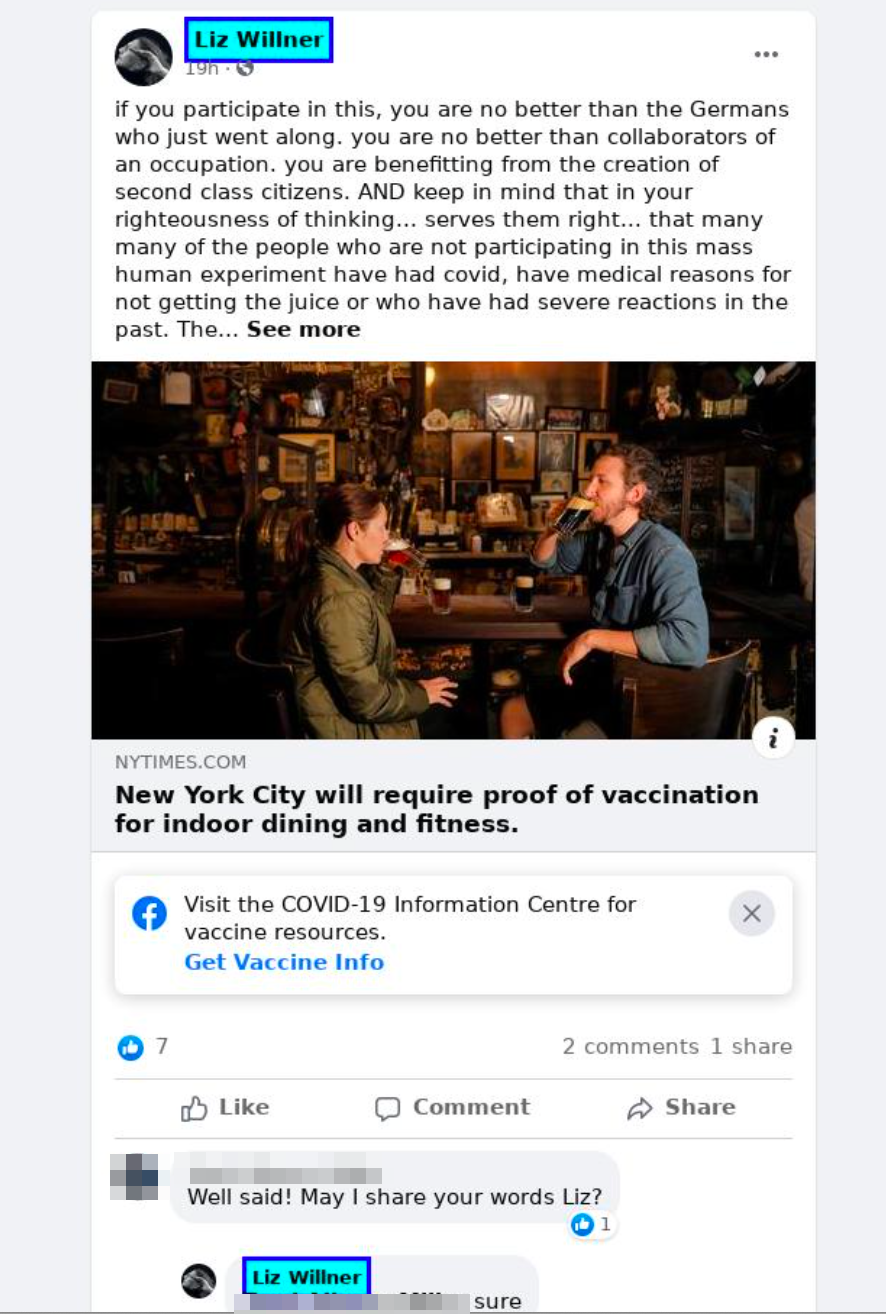 Willner’s digital footprint is a good case study in how an anti-vaccine community can coalesce around an individual, with her Facebook profile essentially operating as a small but influential anti-vaccine community page. Willner shares anti-vax content multiple times per day, as well as providing regular updates on the OpenVAERS project, with those in her circle offering near-unanimous support in her campaign, with close to zero pushback. Beyond her personal profile, Willner’s influence is vast, with many thousands of people viewing her misrepresented data through the sites she operates and still more seeing decontextualized screenshots of her output spread across social media.

In response to questions concerning OpenVAERS' presentation of VAERS data and a general request for comment from Logically, Liz Willner provided the following statements.

OpenVAERS is the work of many people. I'll respond on behalf of the team.

Submitting a false VAERS report is a felony. What is more, the best available evidence shows that about 83% of reporters are Health Care Workers and Pharma [ https://www.healthypeople.gov/2020/data-source/vaccine-adverse-event-reporting-system]. So, while we all agree that VAERS is not perfect, it is much more robust than you are alleging. The purpose of VAERS is to generate signals, signals are happening and are being ignored. OpenVAERS takes the federal HHS/Wonder/VAERS database maintained by General Dynamics and makes it more easily searchable and browseable. That's it. We do not understand why anyone would be opposed to transparency.

You are misrepresenting both Wonder/VAERS and OpenVAERS. The point of the data is to be used by a wide range of scholars and to be accessible to the general public. At no point have we ever taken data out of context. We have used the data exactly as it was intended to be used.

While it is true that OpenVAERS includes links to the VAERS disclaimer, these were not displayed prominently until a change in the website design in the last two weeks. It is also true that one of the functions of VAERS is to generate data points to monitor potential adverse effects, but that is importantly distinct from generating actionable insights: OpenVAERS and those who refer to it frame it clearly as the latter. Raw data is never good information, and as such presenting VAERS data as actionable insight is not transparency, it is either wilfully or recklessly misleading.

For more details on how OpenVAERS and other sites misrepresent federal data on vaccines, check out our Double Check here. Read the VICENews exclusive on OpenVAERS here.