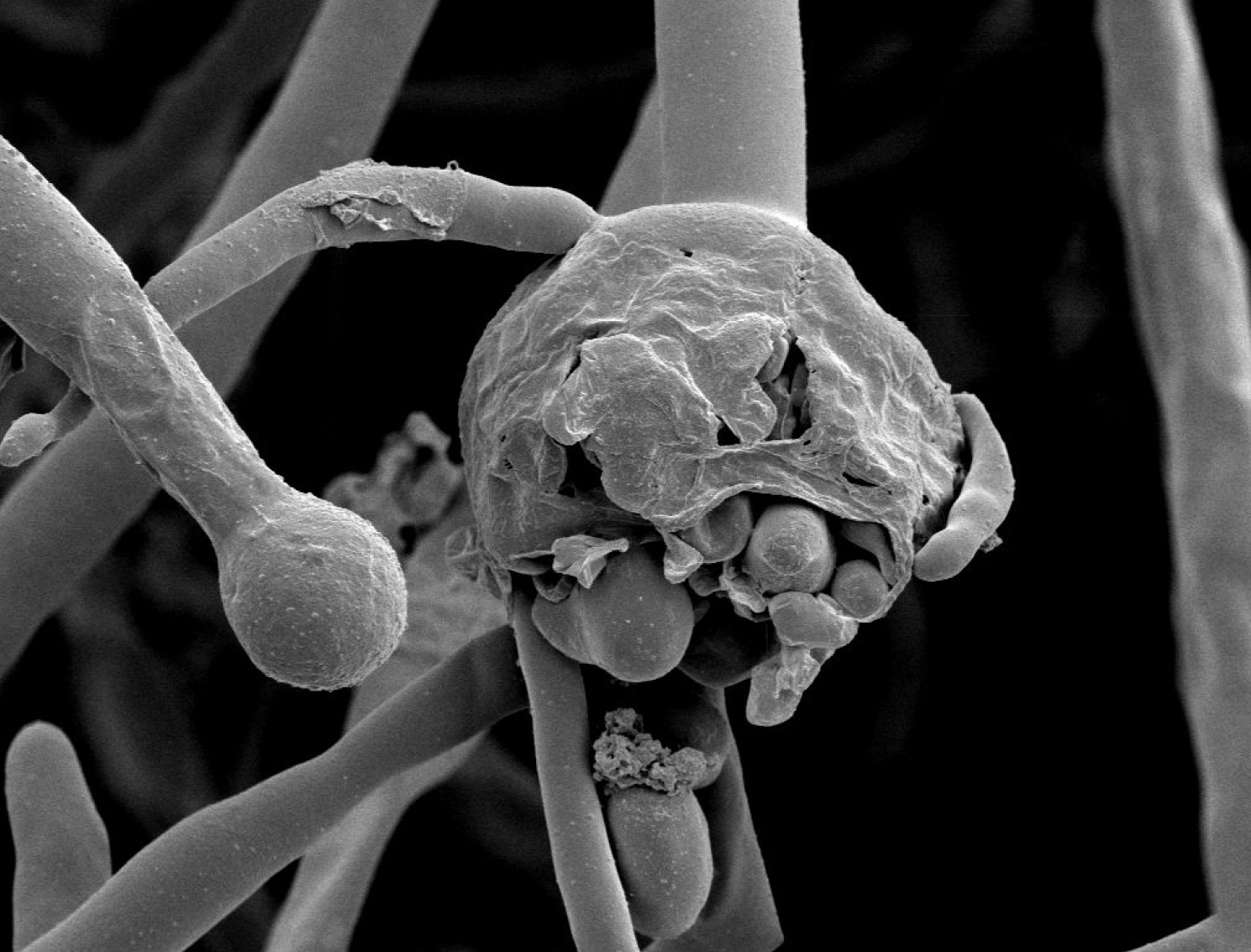 Black fungus is an infection caused by fungal spores commonly found in soil, plants, manure, decaying fruits, and decaying vegetables. It is a rare but serious infection that affects the sinuses, the brain, lungs, and facial bones. It can be life-threatening when left untreated for immunocompromised individuals with underlying illnesses such as diabetes, HIV/AIDS, and cancer, as well as COVID-19.

As stated by the Union Health Ministry, the disease is primarily seen in people who have recovered – or are in the process of recovering – from COVID-19. There is some debate as to why. According to All India Institute for Medical Science (AIIMS) Director Randeep Guleria, COVID patients can contract black fungus after receiving steroids that raise patients’ blood sugar levels. Others have claimed that the infection is spread by unhygienic conditions, or that the use of tap water in oxygen cylinders at fault.

The fungus can infect a person through a cut or a burn and cause local infections but if the fungus goes through the sinus, it can affect the eyes as well as the brain. For the latter, the black fungus needs to be treated by microbiologists, internal medicine experts, neurologists, ENT specialists, and surgeons. To treat the patients, all infected tissues need to be surgically removed – which can lead to patients losing eyes and upper jaws in some cases. Doctors are currently using Amphotericin B, an antifungal drug to treat black fungus in India. Available data suggest that black fungus infections can be successfully treated if diagnosed early, but the condition still has a mortality rate of 50 percent.

False claims about black fungus have flooded social media platforms. Many believe that black fungus is caused by wearing masks, or that it is a symptom of the new COVID-19 strain in India. 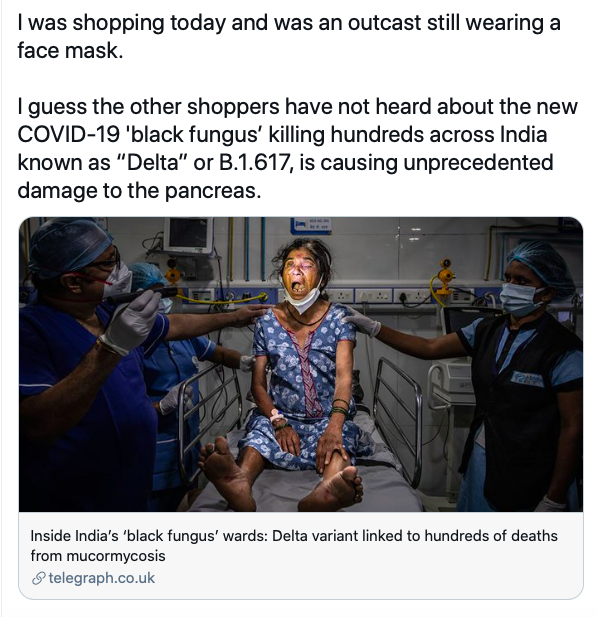 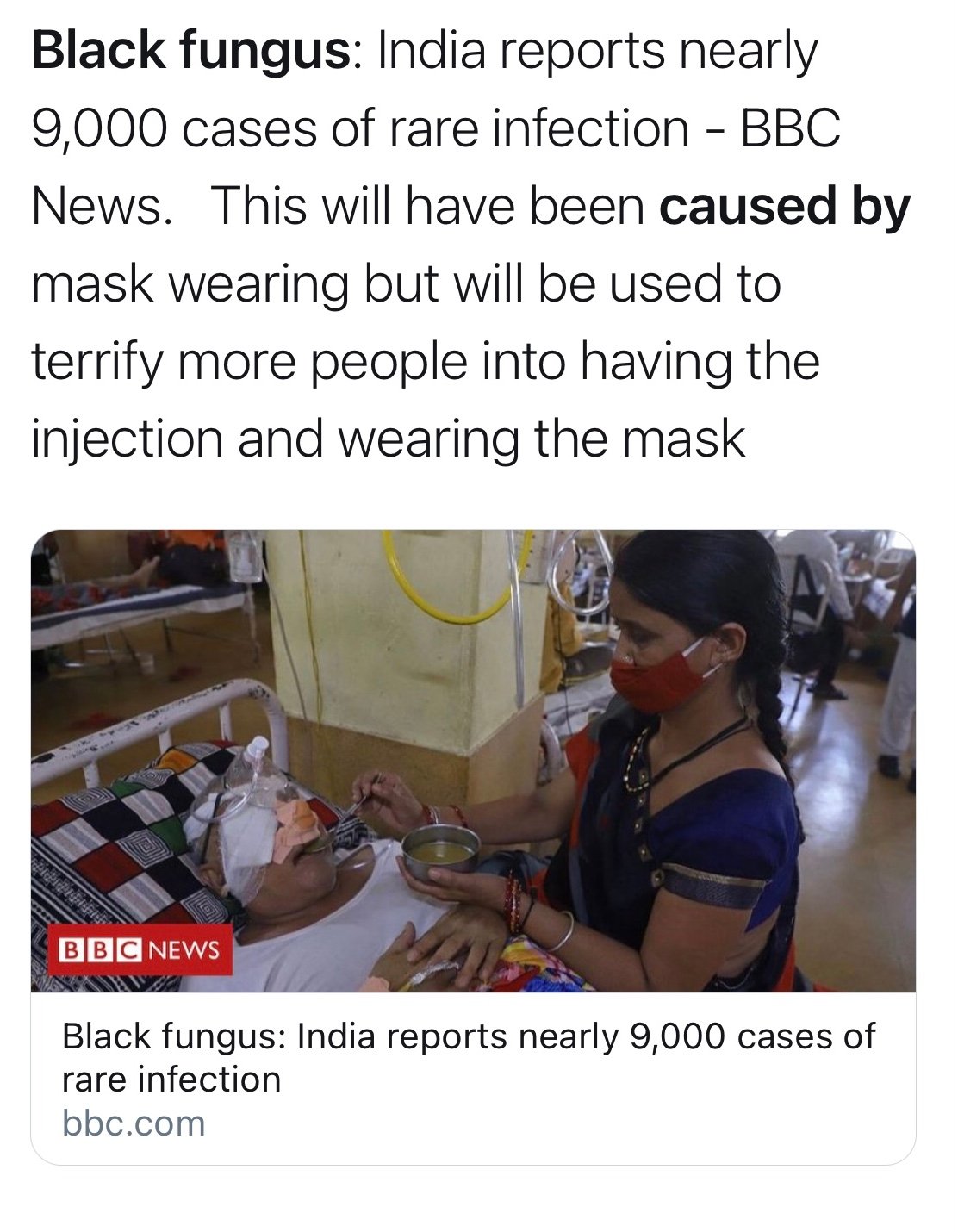 A recent article by British conspiracy theorist and anti-vaxxer Vernon Coleman was titled “India’s Black Fungus Scare is caused by Mask Wearing.” Coleman suggested that black fungus is a new symptom of COVID-19 and is caused by wearing masks. The article has been mentioned 725 times on Facebook and 195 times on Twitter in multiple languages such as Japanese, Portuguese, and Spanish. 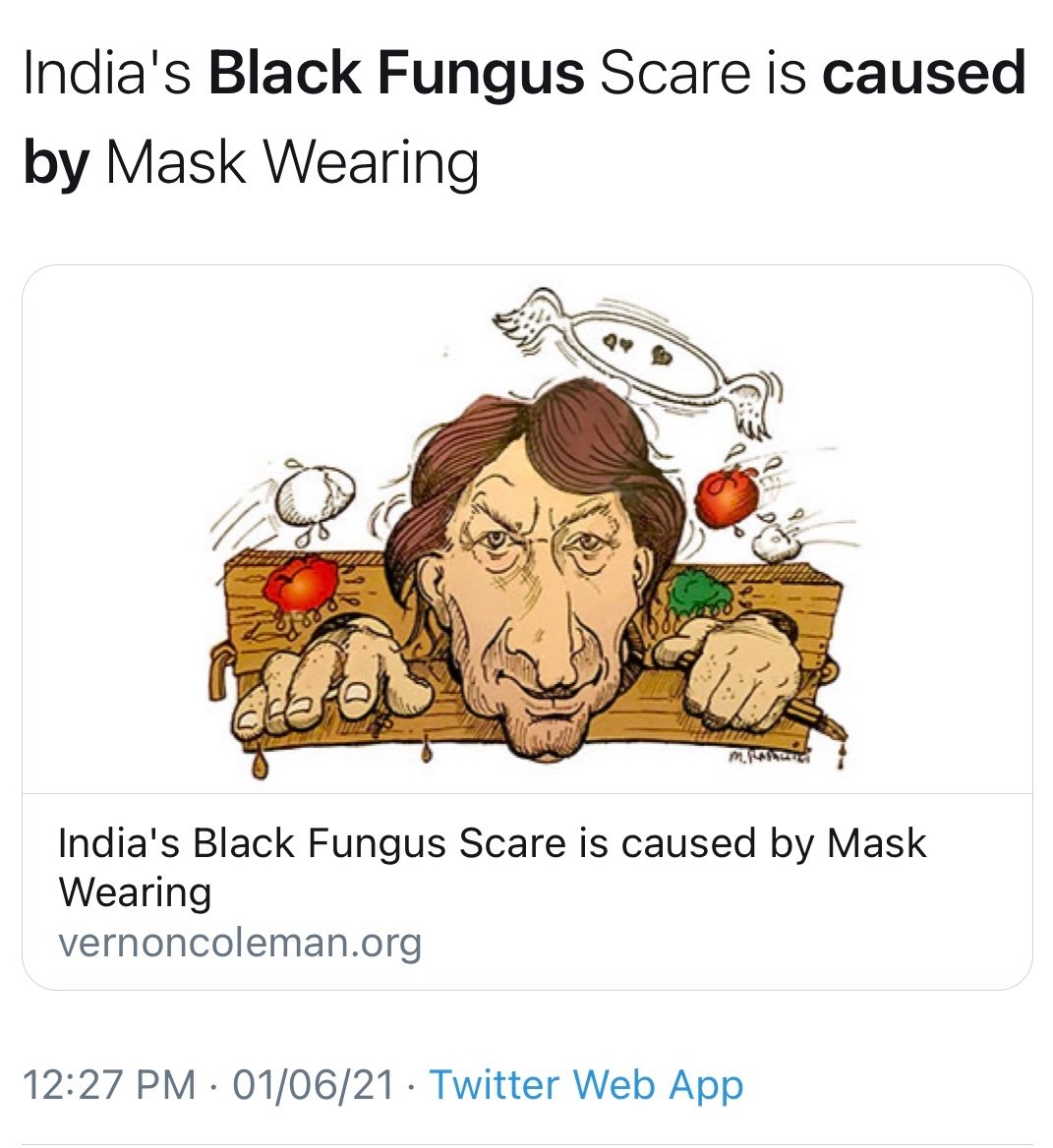 Another popular online theory about the disease argues that black fungus is caused by cow urine after a morphed screenshot of a BBC article started spreading through WhatsApp, Twitter, and Facebook. Some BJP leaders have been promoting unscientific treatments such as cow urine as a cure for COVID. However, doctors have said that there is no evidence that cow urine helps COVID or that cow urine causes black fungus. 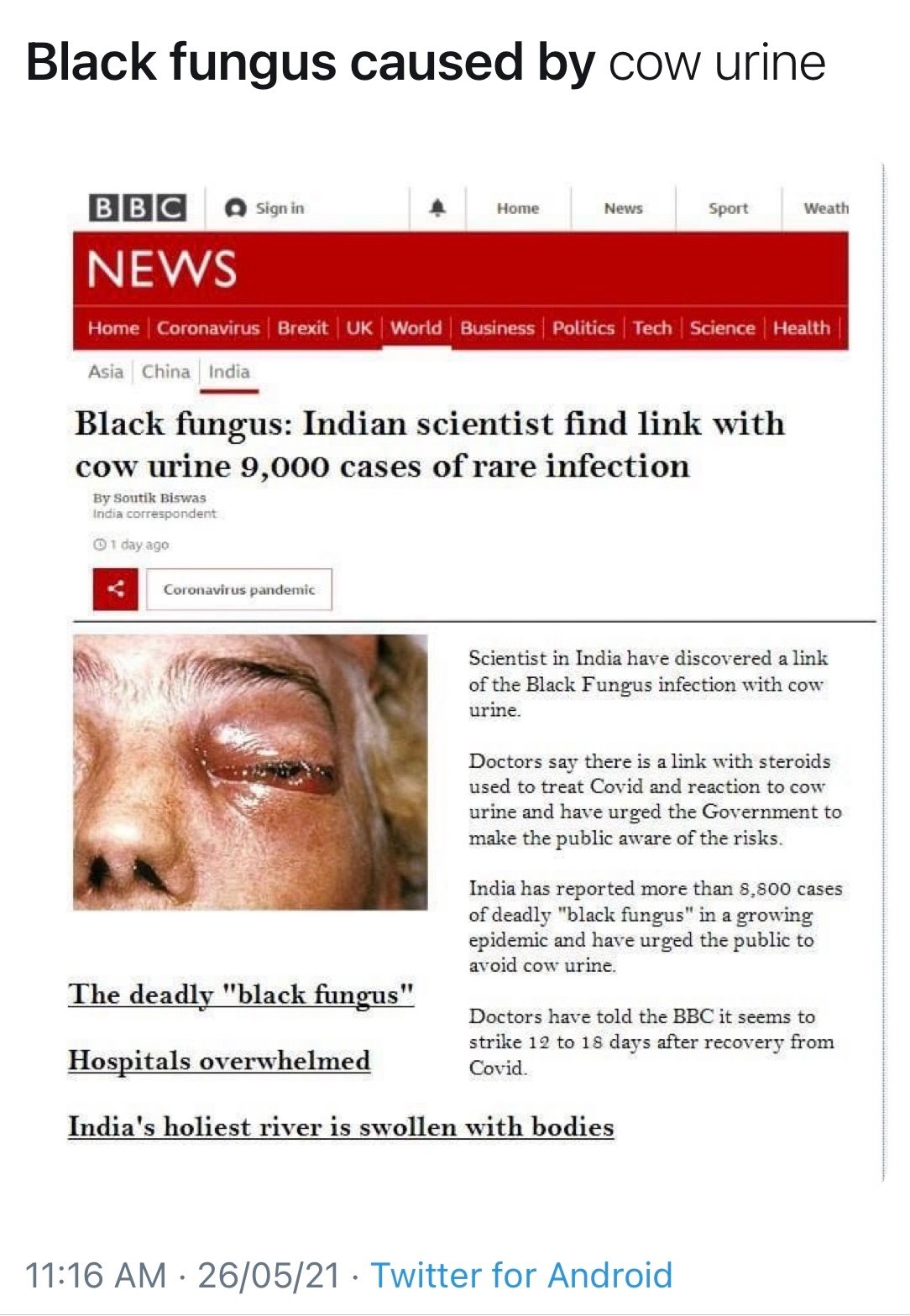 One popular but baseless conspiracy theory argues that the black fungus is a biochemical intervention from China. This follows in the footsteps of an earlier theory that also remains unverified: as India and the world struggled to combat the pandemic, questions were raised on whether COVID was a bioweapon made by the Chinese. Such theories have found traction as a result of the volatile geopolitical relationship between India and China, and are often popularised by users with nationalist leanings. 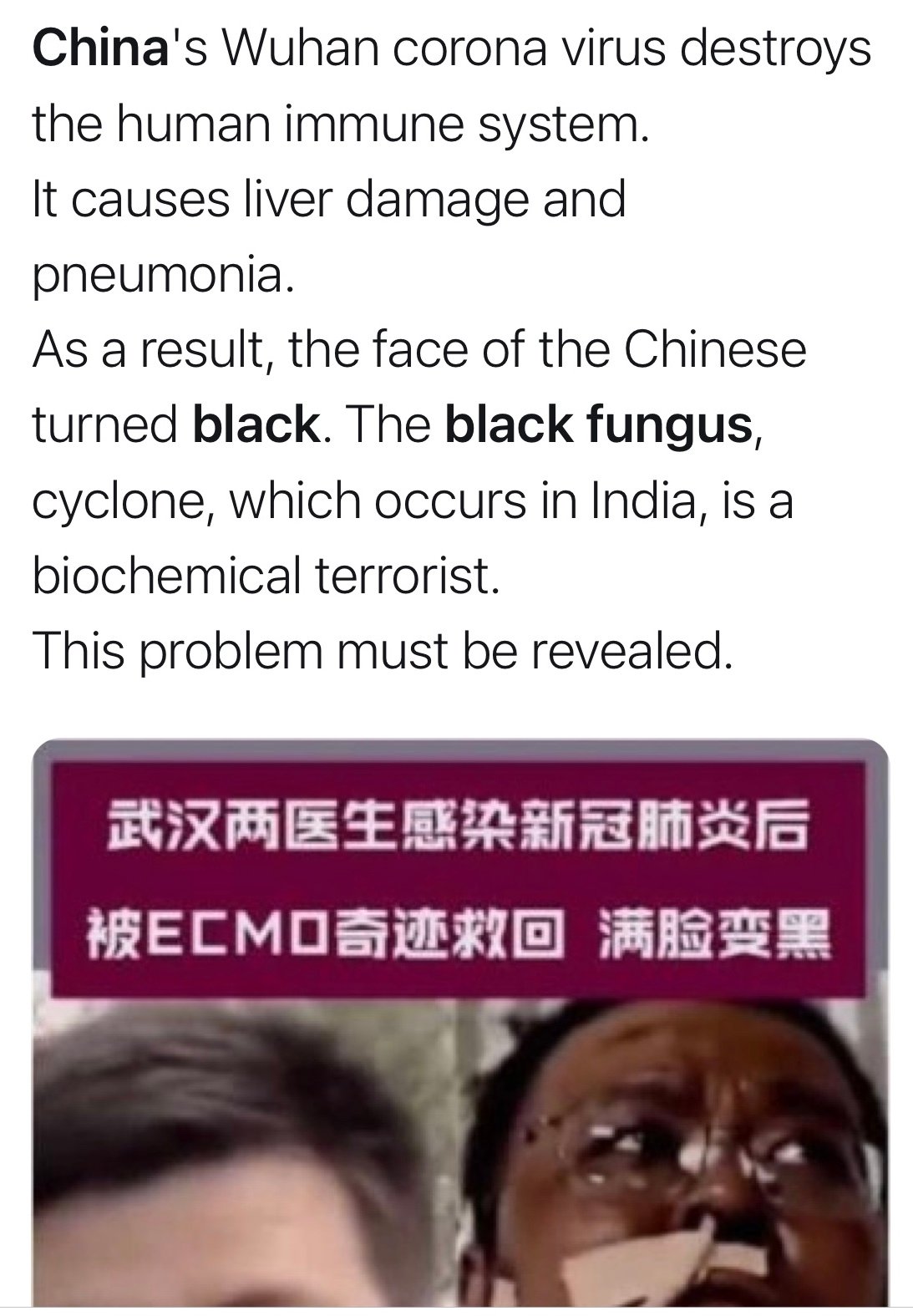 Prominent leaders in India have also been touting unscientific and misleading claims. West Bengal BJP president Dilip Gosh had emphasized the use of home remedies during a meeting in July 2020. He also advocated the use of cow urine to boost immunity in the fight against COVID-19. BJP politician Pragya Thakur’s statement that she drinks cow urine every day to avoid COVID also went viral on social media. Following her claims, Madhya Pradesh’s Culture Minister Usha Thakur suggested conducting a "yagna chikitsa," a fire ritual for four days to prevent the third wave.

Since the start of the pandemic, social media platforms have amplified claims, hoaxes, controversies, vaccine myths, and bogus cures. The discourse around the black fungus epidemic follows a similar pattern. The best defense is clear, verified information from official medical sources, but that can be hard to come by.