The Saga of Ayurvedic COVID-19 Cures 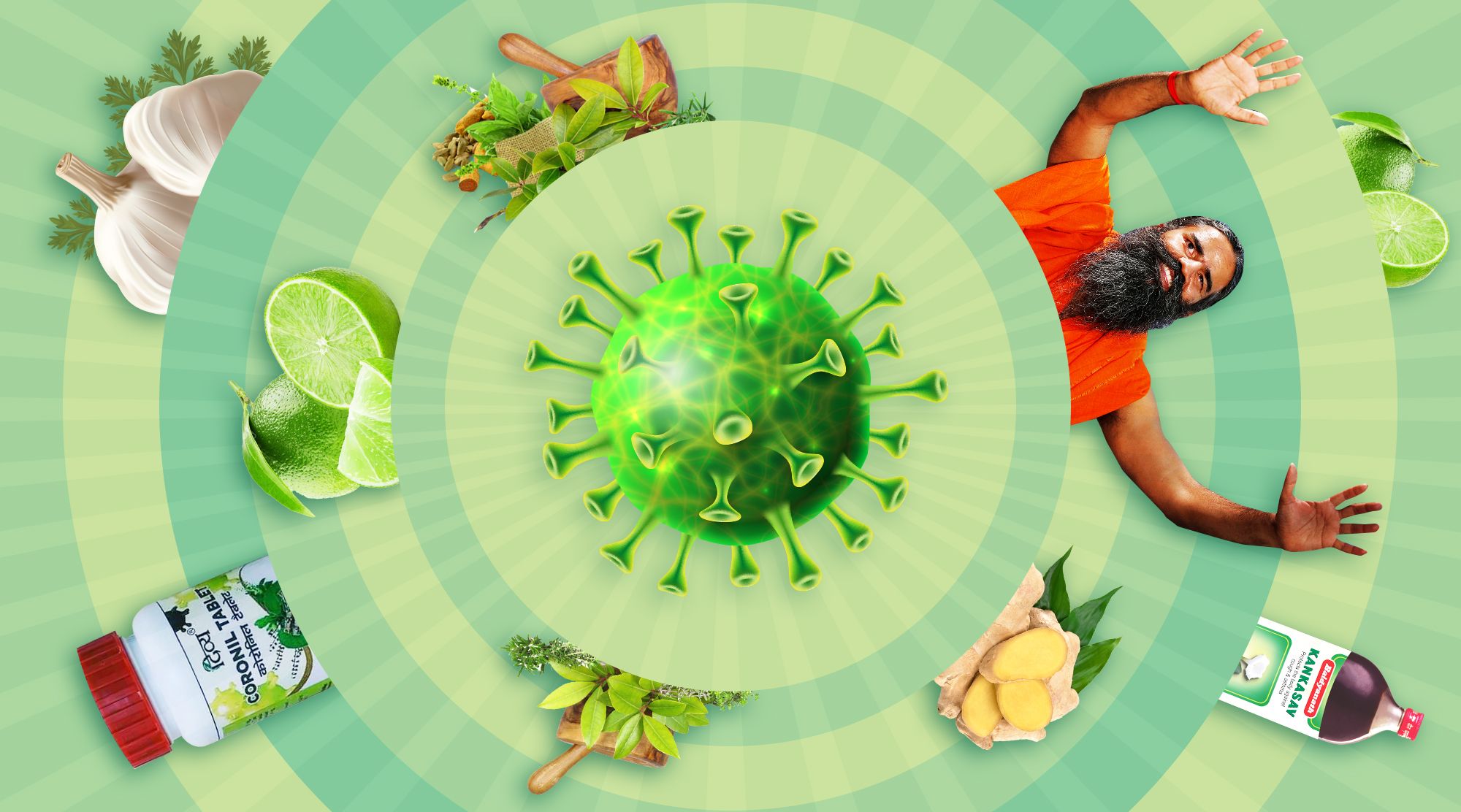 On June 23, 2020, Patanjali Ayurved, one of India’s leading producers of Ayurvedic products announced, amidst much fanfare, that the company had found a cure for COVID-19. Patanjali is the brainchild of yoga guru Ram Kisan Yadav, popularly known as Baba Ramdev.

He claimed that the ayurvedic treatment kit named ‘Coronil’ had been developed after conducting ‘clinically controlled’ trials on 280 coronavirus patients. He further claimed that the new medicine could cure the infection in seven days and that the trials showed “100 percent favorable results”. The company stated it had received the requisite permissions for the manufacturing of the drug.

The news comes at a time when research trials are being conducted urgently across the globe to develop vaccines and drugs that can treat, cure or prevent coronavirus. In India, pharmaceutical companies have started manufacturing Remdesivir and Favipiravir, both of which have shown positive results for alleviating the symptoms of COVID-19 patients.

Favipiravir is currently being tested in 18 clinical trials for COVID-19, with results from two completed studies showing a positive outcome in COVID cases with mild to moderate symptoms. With respect to remdesivir, The New England Journal of Medicine has said that there is a need for more information from ongoing randomized trials to conclude whether Remdesivir is sufficient for treatment.

A week later Patanjali Ayurved has retracted its statements saying the company had never made any claims that its drug Coronil could cure COVID-19. Patanjali CEO Acharya Bal Krishna told ANI, “We never said the medicine (coronil) can cure or control corona, we said that we had made medicines and used them in clinical controlled trial which cured corona patients. There is no confusion in it.”

On July 1, Patanjali Ayurveda claimed that the Ministry of AYUSH has allowed the company to manufacture and sell Coronil kits across the country on the condition that the drug can be sold as a product to manage COVID-19 and not as a cure. In this context, how credible is Baba Ramdev’s claim that Coronil is an effective treatment?

At the launch, Baba Ramdev announced that Coronil would be manufactured by Haridwar-based Divya Pharmacy and Patanjali Ayurved Ltd, and that Patanjali Research Institute had partnered with the Jaipur-based National Institute of Medical Sciences to develop the drug. Ramdev said Coronil had been trialled on 280 COVID-19 patients, of which 69% were cured within three days.

The same day, the Ministry of AYUSH (Ayurveda, Yoga & Naturopathy, Unani, Siddha, and Homoeopathy) issued a statement directing Patanjali to stop advertising Coronil until the company had submitted the details of the composition of the medicines, the research methodology, Institutional Ethics Committee clearance and the results of the study for verification. The press release also stated that “facts of the claim and details of the stated scientific study are not known to the Ministry.”

The Coronil kit consists of a herbal tablet (a formulation called Divya Swaswari Raswhich – DRS) and a bottle of nasal oil drops. The Managing Director of  Patanjali Ayurved, Acharya Bal Krishna, claimed that the development of Coronil was backed by Randomised Controlled Trials; the gold standard of clinical trial. In reality, Coronil did not undergo Randomised Controlled Trials, and was not subjected to the appropriate level of scrutiny which is required for medical drugs.

In response to the Ministry’s directive, Patanjali released a set of documents. These include the clinical trial registry document which shows the trial was registered prospectively on May 20, 2020. As per the CTRI website, the trials were conducted on 120 patients who were between the age of 15-80 years and were asymptomatic or exhibited mild-moderate symptoms. Patients with severe symptoms and Acute Respiratory Distress Symptoms were excluded. There were no results submitted along with the registration document.

Two other research studies were also submitted, but neither supported the claims made by Patanjali; one studied the efficacy of DRS in treating allergic asthma in mice, and the other offered computer simulations suggesting using Giloy could be useful for curbing COVID-19 contagion.

The Political is Medicinal

This is not the first time that Ayurvedic practitioners have made false claims about formulating cures for coronavirus. As India’s COVID-19 caseload went up, there was a colossal increase in messages forwarded on social media about Ayurvedic cures for the disease. From promoting vegetarianism under the false pretext that only those who eat meat were being infected with the virus to claims about tulsi concoctions boosting immunity, to the Union Minister for Ayush Shripad Naik making untrue statements about Prince Charles being cured of COVID-19 through Ayurvedic remedies – misinformation was rampant.

In March, members of the Akhil Bharatiya Hindu Mahasabha, a right-wing Hindu nationalist outfit with close ties to the BJP, conducted a gaumutra (cow-urine) party in Delhi. More than 200 members drank cow urine believing that it could keep coronavirus at bay. Before the coronavirus outbreak, members of the BJP had previously advocated for the medicinal properties of cow urine, even claiming that it can cure cancer.

The purported medicinal properties of cow urine are listed in the Sushruta Samhita – one of the oldest and most-revered Sanskrit texts on medicine and surgery which laid the foundation of Ayurveda. Barring a study on the anti-diabetic properties of cow urine, the results of which were inconclusive, there is no empirical evidence which supports these claims.

That cow urine has been considered the fashionable liquid is a microcosm of Indians’ blind faith in the Ayurvedic system of medicine since time immemorial. The genesis of Ayurveda can be traced back to the Vedic ages (approximately 6000 BCE) and the earliest mention of Ayurveda can be found in Atharva Veda, one of the four Vedas of the Vedic scriptures of Hinduism.

Ayurveda has been entwined with cultural, historical, and religious narratives in India and the current BJP-led government has utilized this for propagating their Hindutva narrative. BJP leaders and members of the Rashtriya Swayamsevak Sangh have cited Ayurveda as an example of the greatness of the Hindu civilization reminiscent of the early 20th century when it was seen as a source of social pride in India’ s anti-colonial movement. In 2014, Prime Minister Narendra Modi got Baba Ramdev to add an extra layer to his election campaign by making the Ayurveda guru mobilize votes for the BJP for the Lok Sabha elections.

The Lack of Scrutiny of Ayurvedic Products

Dr. Adarsh Pratap Singh, president of the Resident Doctors’ Association at the All India Institute of Medical Sciences in Delhi says the common perception is that Ayurvedic medicines are composed of herbal and natural ingredients. This increases the threat posed by misleading advertisements like that of Coronil – “I have seen gall bladder carcinoma patients wanting Ayurvedic remedies even though surgery is the only option. At a time when the public health infrastructure is under so much pressure, the government should not ask people to follow Ayurveda blindly. The inaccessibility of medical care during the pandemic can make them more susceptible to these bogus claims and that can have disastrous consequences.”

Dr. Singh emphasized that the government should invest in conducting research trials and studies instead of jumping the gun and promoting medicines. He says, “None of the major medical institutions in the country trust Ayurveda and there is a dearth of credible studies on the efficacy of Ayurvedic drugs on the human population. The government should observe and mathematically analyze the outcome of ayurvedic drugs on patients, gather evidence that ayurvedic management of diseases can be better than existing management, and at least get Class 1 recommendations before promoting any Ayurvedic remedies. There is also an urgent need to study the toxic effects of metals in common Ayurvedic preparations.”

A report published in The Lancet Diabetes and Endocrinology journal states, “The safety of Ayurvedic preparations is also a major concern. In addition to several reports of heavy metal toxicity due to these drugs, in one study, a fifth of Ayurvedic medicines manufactured in the USA and India contained detectable lead, mercury, or arsenic compounds, which exceeded one or more standards for acceptable daily intake of toxic metals. Among the metal-containing products, 95% were sold by US websites and 75% were claimed to have been manufactured in accordance with good manufacturing practices.”

‘The Concept of Virus Does Not Exist in Ayurveda’

Despite this lack of evidence the government routinely waxed lyrical about Ayurvedic measures that citizens should adopt to boost immunity in the wake of the COVID-19 outbreak. Press releases from the government advocated the consumption of chyawanprash, the application of coconut and sesame oil in both the nostrils, drinking warm water, and eating turmeric, cumin, and garlic.

At the behest of the government, doctors in government and private hospitals have also recommended these remedies to coronavirus patients for boosting immunity. Dr. Hemant Bhartiya, a neurosurgeon at Fortis Hospital in Jaipur says, “We have been asked to recommend ayurvedic immunity boosters to COVID patients but we make it a point to emphasize that these are the non-interventional measures and currently our best bet against the virus is hand washing, wearing masks and social distancing.”

Dr. Muneer Mammi Kutty, a Kerala-based public health professional with Fortify Health who also volunteers for the government’s Jan Swasthya Abhiyan and has a degree in Ayurvedic medicine, says, “Claims that Ayurveda can boost immunity are bogus because Ayurveda does not have the concept of viruses or immunity. Ayurveda relies on the humoral theory according to which the human body has three elements – Vata, Pitta, and Kapha corresponding to the three elements of the universe – air, fire, and water. Any disease is considered to be an outcome of an imbalance in these elements. Also, the government does not mention the lack of standardization in Ayurveda – the ayurvedic practices in Kerala are diametrically different from those practiced in Maharashtra, a chyawanprash made by Dabur does not have the same composition as that of Patanjali and chywanprash can be harmful to diabetic and obese people due to its high concentration of ghee and sugar.”

Meanwhile, Dabur – one of the biggest Indian brands in the Ayurvedic FMCG space – registered a surge of 400% in demand for its chyawanprash.

India’s nearly half-year long farmers agitation received international attention earlier this month when Rihanna tweeted about the protests. The 32-year-old Barbados-born singer’s tweet asked “[W]hy aren’t we talking about this?!” along with an...