Astroturfed Campaigns in the U.S. And India Are Rewriting History 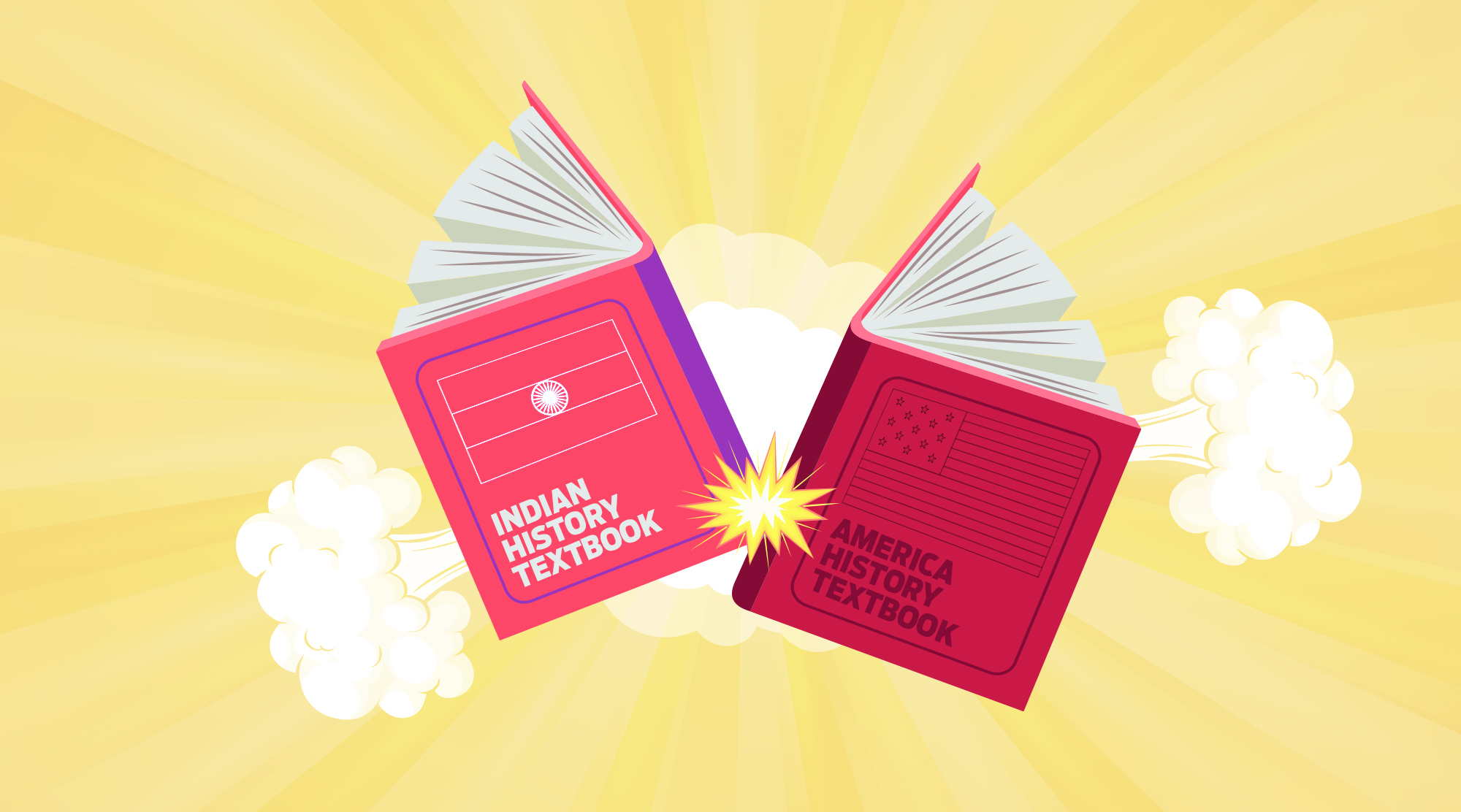 Republican Glen Youngkin’s win in Virginia’s gubernatorial race in early November caught the attention of many in the GOP. Although he was lagging behind Democrat Terry McAuliffe, his campaign gained steam when he decided to add another issue to his usual list of talking points – the banning of critical race theory, also known by its initials, CRT.

A field established in the 1980s, critical race theory emphasizes the unique historical role that legal systems play in upholding and producing racial inequalities. Recently, CRT has been subject to intense scrutiny from conservatives, who are concerned it leads to “reverse racism.”

This phenomenon is not unique to Virginia, nor even the U.S. The debate over teaching history in classrooms with a nationalistic lens has struck a chord among conservative voters globally. In the U.S., Republicans are either passing legislation against CRT or taking a page out of Youngkin’s playbook for upcoming elections, while in India, elected governments are revisiting history textbooks to appease majoritarian sentiments.

In both India and the U.S., state players claim to be listening to a grassroots movement. However, this isn’t quite right. While initially, it seemed that anti-CRT sentiment was driven by local movements run by concerned parents, it actually stemmed from powerful political organizations with wealthy donors who “astroturfed” the appearance of a grassroots movement. Similarly, in India, the agenda to rewrite Indian history, propagating a glorious Hindu civilization followed by centuries of Muslim rule that Prime Minister Narendra Modi described as “slavery,” started from the top.

In a BBC interview last week, Ryan Girdusky, the founder of the 1776 Project, which campaigns to stop the teaching of critical race theory, insisted that CRT is taught in schools. When pressed by interviewer Stephen Sackur – who said that it’s not true that CRT is taught in Virginia schools, Girdusky said that it was “practiced,” citing fifth-graders doing “privilege walks” as evidence of this.

Girdusky’s claim that CRT is being taught in schools is false.

As the BBC’s Stephen Sackur correctly stated, Girdusky’s claim that CRT is being taught in schools is false. According to a survey obtained by NBC News, teachers nationwide said K-12 schools are not requiring or encouraging them to teach critical race theory, and most said they were opposed to adding the academic approach to their course instruction. And while some school districts and teachers are incorporating diversity, equality, and inclusion into the curriculum, most students aren’t taught the works of Kimberlé Crenshaw, Derrick Bell, and other CRT scholars until college. Influential voices among conservatives have been successful in clubbing a series of progressive trends in schooling under the ambit of CRT.

While several media outlets reported the 1776 Project as a new organization that would get involved in Virginia’s race, it is not – it is a rebrand. Prior to 2021, it was known as the American Legacy Center. According to CNBC, it raised over $2.3 million from 2014 to 2019 and has ties to several of former President Donald Trump’s allies.

As reported by CNBC,  the 1776 Project targeted Hillary Clinton during the 2016 presidential election, as well as various congressional Democrats during the 2018 midterms. Now working towards stopping “anti-American indoctrination,” it previously criticized Clinton’s handling of the 2012 attack on the U.S. compound in Benghazi, Libya, when she was secretary of state.

India’s most powerful elected leaders not only started but also stoked the course of rewriting Indian history in school textbooks.

GOP members might have been quick to hop on the anti-CRT bandwagon, but India’s most powerful elected leaders not only started but also stoked the course of rewriting Indian history in school textbooks.

“Putting together our history, embellishing it, and rewriting it is the responsibility of the country, its people, and historians,” Home Minister Amit Shah had said while speaking in Banaras Hindu University in 2019.

Shortly after Prime Minister Narendra Modi was elected in 2014, the Rashtriya Swayamsevak Sangh (RSS) formed a committee to “Indianize” the education system. The RSS is ​​a 5 million-member Hindu nationalist organization, with significant power and influence over the government. The committee was headed by the RSS-affiliated Dinanath Batra, who wanted to fill textbooks with Hindu nationalist ideas. “There is disinformation in books that are in schools and universities, they do not convey good meaning to the boys and youth,” Batra said was what the committee aimed to resolve in a 2014 interview with Newslaundry.

In addition, Y Sudershan Rao, who believes that historiographic research should focus on identifying the locations where the “events” described in the epics took place, was appointed by the government to head the Indian Council of Historical Research before stepping down a year later.

“This entire movement came from nothing,” Christopher Rufo, the conservative activist who reportedly started the movement against CRT, told the New Yorker’s Benjamin Wallace-Wells, accurately describing how CRT has cascaded into a major political discourse.

Media Matters, a progressive media watchdog that monitors right-wing outlets such as Fox and Newsmax, identified 64 Facebook groups dedicated to opposing critical race theory, with at least 9,800 combined members. Nearly all of these groups were created this year. It also identified 187 right-wing parent and/or education groups on Facebook committed to combating the more general “liberal indoctrination” in schools, which had more than 200,000 combined members.

Some of these groups were created by people who have been amplified by right-wing media as local parents and teachers but have been active in conservative politics or worked for the GOP. People like Carrie Lukas, Ian Prior, and Jennifer Stefano made multiple appearances on Fox as “concerned parents,” rather than as people who work for conservative think tanks.

Since February, Fox News has mentioned CRT nearly 1,300 times. The more Fox News mentioned critical race theory, the more activity there was around the subject on Facebook. Again, many of these Facebook groups were created and managed by the same people who made appearances on Fox News.

The above accounts have hundreds of thousands of followers who shared misleading infographics related to CRT. Major narratives employed by anti-CRT accounts include it stems from a Marxist ideology and propagates “white guilt.”

Between October 28 to November 26, the term “critical race theory” garnered one million mentions online, with a significant majority of these being on Twitter. The highest volume was on November 3 at nearly 160,000 – the day after Youngkin won.

Moreover, a Popular Information investigation found 28 sites purporting to be local news outlets in Virginia were owned by the same company and published almost 5,000 articles about critical race theory in schools.

Jasmine Banks, the executive director of UnKoch My Campus – which urges universities to reject funding from Koch-affiliated organizations – argues in the Nation that Koch-funded entities have manufactured this cycle of outrage. According to Banks, UnKoch My Campus reviewed works of 28 conservative think tanks and political organizations with known ties to the Koch network from June 2020 to June 2021 to find they had collectively published “79 articles, podcasts, reports, or videos about Critical Race Theory.” The conservative think tank Manhattan Institute for Policy Research alone published 43 separate articles or videos on the topic.

In a study titled “Divided We Rule: Influencer Polarization on Twitter During Political Crises in India,” researchers found that influencers have become an essential piece of communication ecology since partisan bias is amplified on social media platforms such as Twitter. These networks are organized around a few key influencers, similar to links between online influence and partisanship in the U.S.

This year, nine states successfully passed anti-CRT legislation in the U.S., and 20 states have introduced or plan to introduce similar legislation. Other than North Dakota and Idaho, none of the bills passed actually mention the words “critical race theory”. In Texas, teachers told the Texas Tribune the new laws could “give a generation of Texas students an incomplete and white-centric view of history.” Others are concerned it could censor teachers.

In India, from India’s first Prime Minister Jawaharlal Nehru being omitted from Grade 8 textbooks to India’s founding father B.R. Ambedkar – a Dalit who led the writing of the constitution and was a prominent opponent of the caste system – being classified as a “Hindu social reformer,” the ruling Bharatiya Janata Party (BJP)  has been successful in sanitizing Indian textbooks.

BJP-ruling states have been even more successful in revising history on communal lines. The University of Rajasthan made changes to showcase Hindu rulers as the victors in major battles against Mughal rulers. The social science textbook in the state also no longer ​​says anything about Mahatma Gandhi’s assassination by Nathuram Godse. Instead, RSS ideologue Veer Savarkar is mentioned repeatedly as a “great patriot, great revolutionary and great organiser.”

Batra’s moral science book that aims at instilling “Indian values” by chanting Hindu mantras is already being used in Haryana and Gujarat.

Experts say driving factors behind the support for the manufactured outrage in both countries are nationalistic sentiment aided by religion/race-baiting. The sequence of events in both countries shows how issues orchestrated by those in positions of power can be projected as common concerns. In the end, however, both are simply political tools.

The rise of the 24-hour news cycle in the US is largely credited to the grim spectacle of the OJ Simpson murder case in 1994. Since then, cable news, then online news, and then social media platforms have all scrambled mercilessly for our...