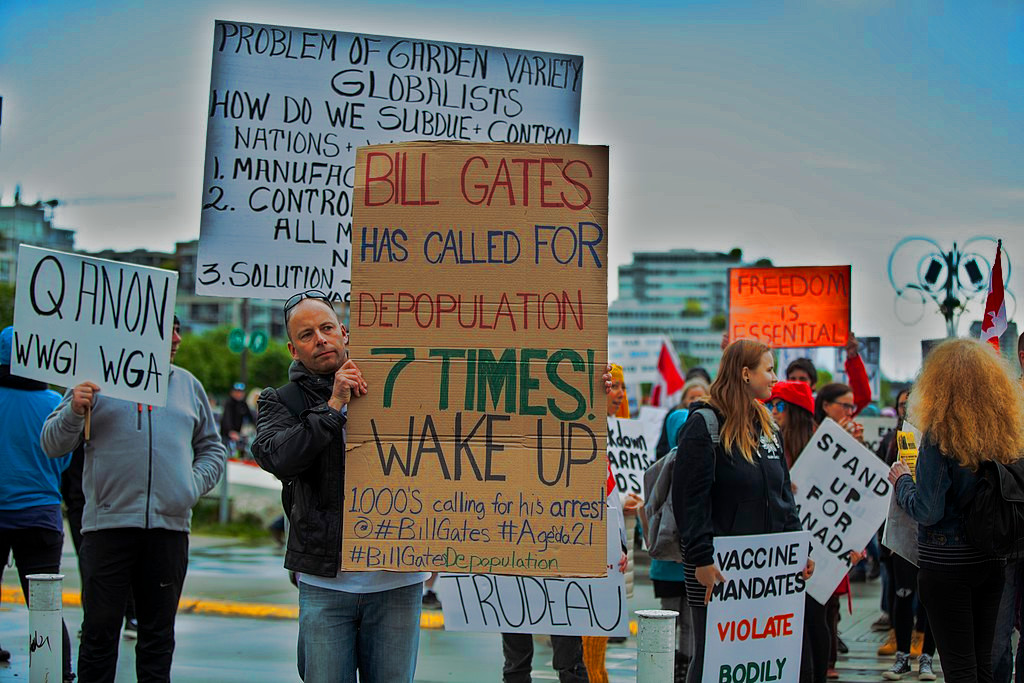 By Ernie Piper and Jordan Wildon

A Logically investigation into one of the largest COVID-19 conspiracy groups on English-language Telegram has found a disturbing amount of antisemitism. In a channel of nearly 70k members, one in every 200 posts contained an overtly antisemitic narrative.

The 21,304 accounts active in the chat currently share about 10k messages per day, which means that someone scrolling through could on average encounter Holocaust denial, myths about blood libel, or claims that Jews control the world every half an hour.

In total, we found 3,433 pieces of explicitly antisemitic content shared over six months, from the channel’s creation on April 17 to the present day. This count excludes coded antisemitic narratives, dog whistles, or posts that play on antisemitic themes without mentioning Jews specifically, such as those that blame “elites” or a cabal of pedophiles. It also excluded any antisemitic image/video-only posts.

For those of us who work in the field, the antisemitism in COVID-skeptic spaces is somewhat obvious, as we encounter it every day. But for those unfamiliar, it seems completely disconnected. Why should political opposition to lockdowns, or anti-COVID-vax activism, have anything to do with antisemitic hate speech?

A recent report from Hope Not Hate found that COVID conspiracies were one of the main avenues into antisemitic rhetoric. This is due to what they term “conspiratorial antisemitism.”

“An important bridge between COVID-19 conspiracy theories and antisemitism are ideologies that provide overarching explanations for smaller alleged deceptions,” the report explains. “For example, the need for anti-5G campaigners to explain why telecom companies, healthcare providers and authorities are conspiring to expose the population to supposedly dangerous radiation has driven attention towards ‘superconspiracies’.”

Antisemitism serves as such a “superconspiracy” and creates a hierarchical structure for these conspiracies. The idea is that more powerful conspiracies higher up the pyramid control the lesser conspiracies. The top of the imaginary pyramid, unfortunately, tends to be Jews.

Logically has previously reported on the right turn, the infiltration of social media groups by Nazis who attempt to radicalize those groups. While coded antisemitic notions often pervade conspiracy spaces, we wanted to give our readers a glance under the hood at exactly how open this antisemitism can become.

For this investigation, we focused on one of the largest English-language COVID-19 conspiracy groups on Telegram. The channel currently has 69,308 members, 35,230 of whom have posted at least once. 21,304 of those posted more than once, and 7,687 posted more than 10 times.

This proportion of total membership to active accounts is high. According to previous research Logically conducted in partnership with GNET into QAnon extremism on Telegram, on average only 25 percent of accounts in large groups are active in chat groups. Here, a little over 30 percent of the accounts are active, demonstrating an above-average level of engagement.

We chose this space because it is a group, not a channel – meaning that anyone in the chat can contribute, rather than a handful of admins holding the reins. Because of Telegram’s rhizomatic structure, and because it’s a public group, the chat serves as a kind of distribution hub for conspiracy theories. A large proportion of the posts are forwarded from other channels or groups, which means users could easily tap on the links to those groups and join them. For the same reason, it’s probable that anyone within the anti-COVID-vax conspiracy space on Telegram would encounter this group through shares elsewhere.

Although the group analyzed was created on April 17 and had only a few hundred members at the beginning, it swelled to 70,000 over the summer. It appears to have been linked to a now-defunct Facebook group, which was able to funnel a large number of members rapidly to the group. Just a month after its creation, there were roughly 2,000 messages posted per day. The channel showed relatively consistent growth for the next four months, with thousands of members sharing between 4,000 and 6,000 messages per day. Over the last month, message volume spiked to its current pace of around 10,000 messages per day.

To analyze indicators of antisemitism, we performed a keyword search of seventeen known terms, slurs, and pejoratives used in explicitly antisemitic language, including “jew,” “blood libel,” and an explicit reference to neo-Nazi propaganda. One of the most common narratives in this group, and others like it, belittles the Holocaust by comparing the COVID-19 pandemic to the atrocities of the Nazi regime. Alongside this, posts making claims that the pandemic is part of a Jewish-led conspiracy, as well as outright Holocaust denial are not uncommon. 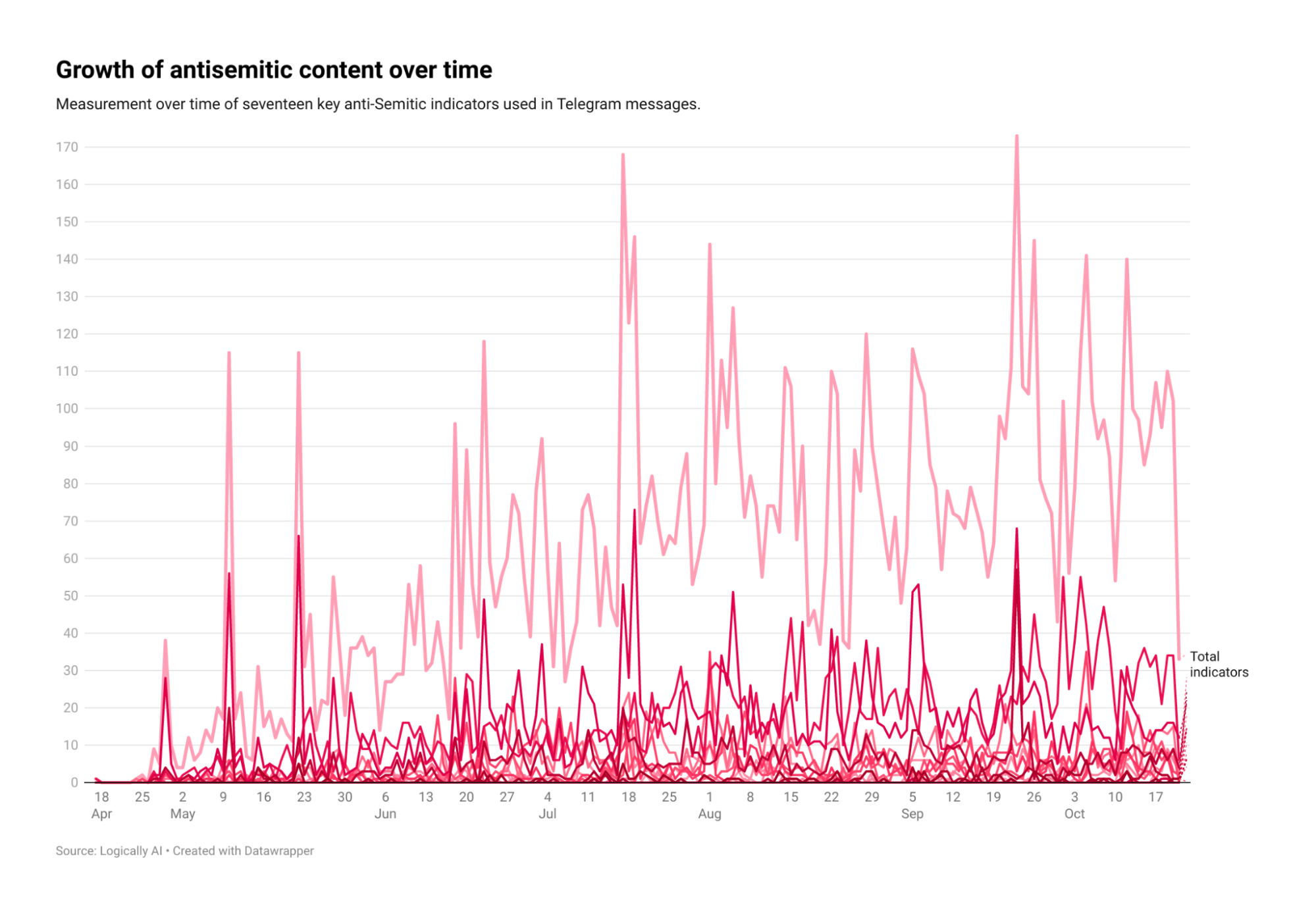 The top line of this graph is the total number of antisemitic posts per day, and the lines beneath it chart the 17 individual explicit terms we tracked. The number of individual posts per day containing one or more of these terms ranged anywhere between 4 to 173.

Our investigation found that on average 0.4 percent of the text posts in the group were openly antisemitic, equating to approximately one out of every 200 posts contained language that explicitly talked about Jews organizing a conspiracy.

In total, our investigation turned up 3,433 posts that in some way mentioned Jews, Judaism, or the Holocaust.

These posts took multiple forms and used multiple antisemitic narratives and generally weren’t included in the keyword analysis, as they sometimes were image or video-only posts. Some of the most common narratives posted involved naming groups of Jewish people who work either in government, medicine, or media, and accusing them of organizing a conspiracy. One post had a graphic of Jewish people in leadership positions in Pfizer, Moderna, the CDC, and Biden’s White House. The caption read “[Star of David emoji] = [poop emoji] on earth” 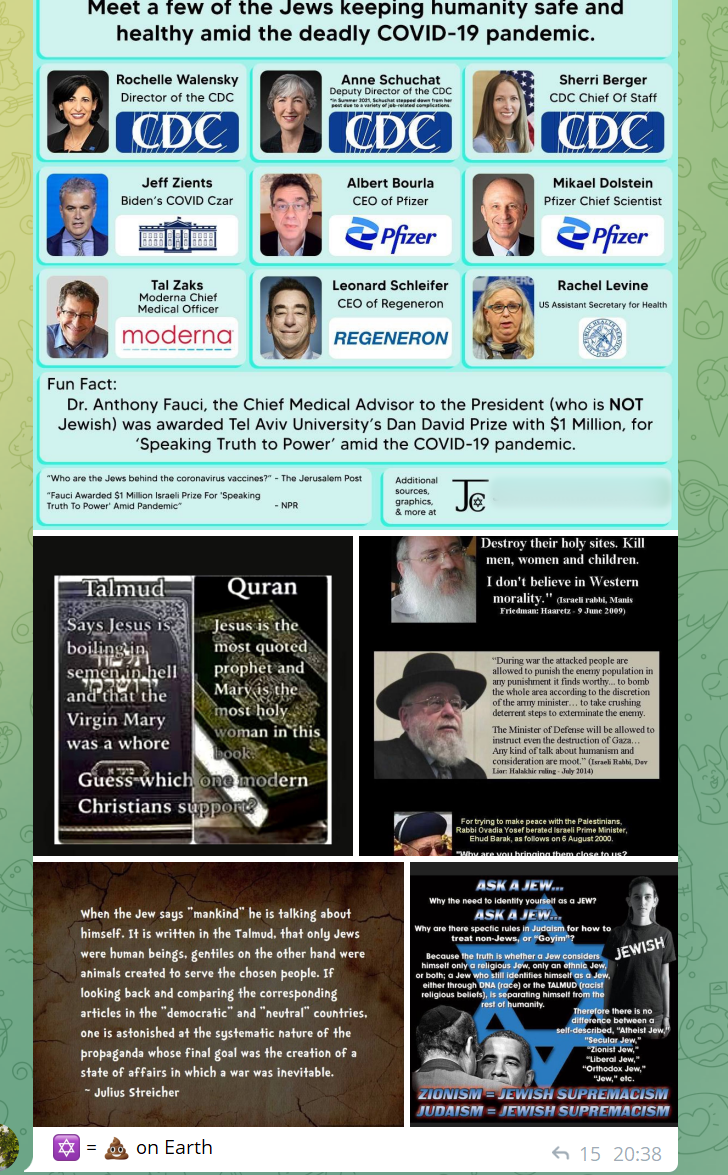 Holocaust denial was another common narrative we encountered. These often took the form of comparing “unvaccinated” lives to Jews under Nazi Germany, claiming that mask or vaccination mandates were similar to the Holocaust. 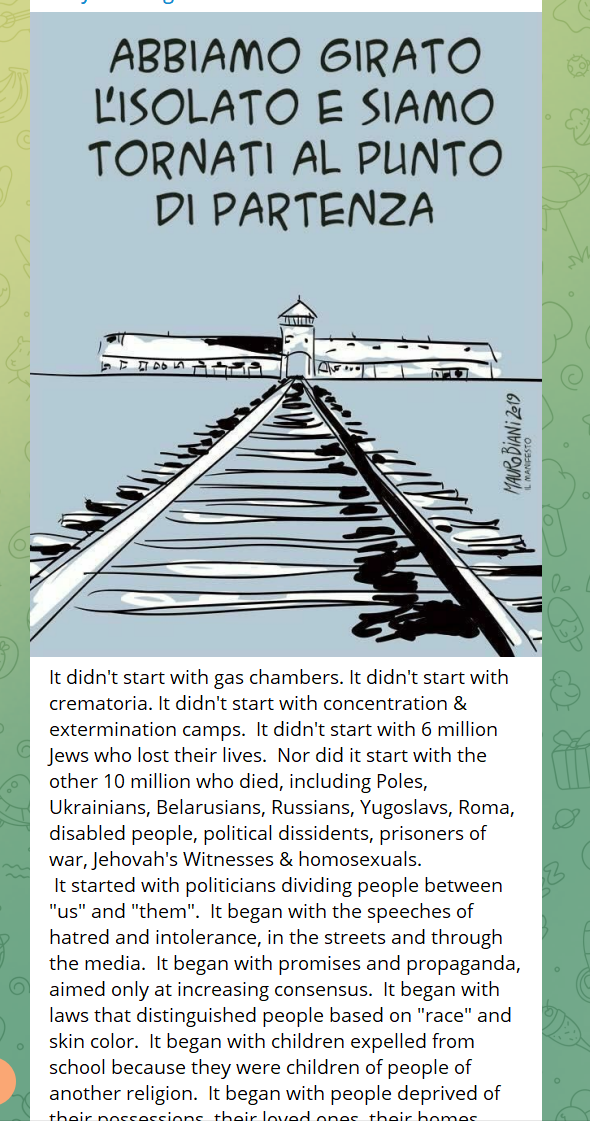 There were also more extreme forms of Holocaust denial – for instance claiming that it didn’t happen at all, or that actually it was the Jews who had planned a Holocaust of the germans. In these posts, there were no references at all to the COVID-19 pandemic. 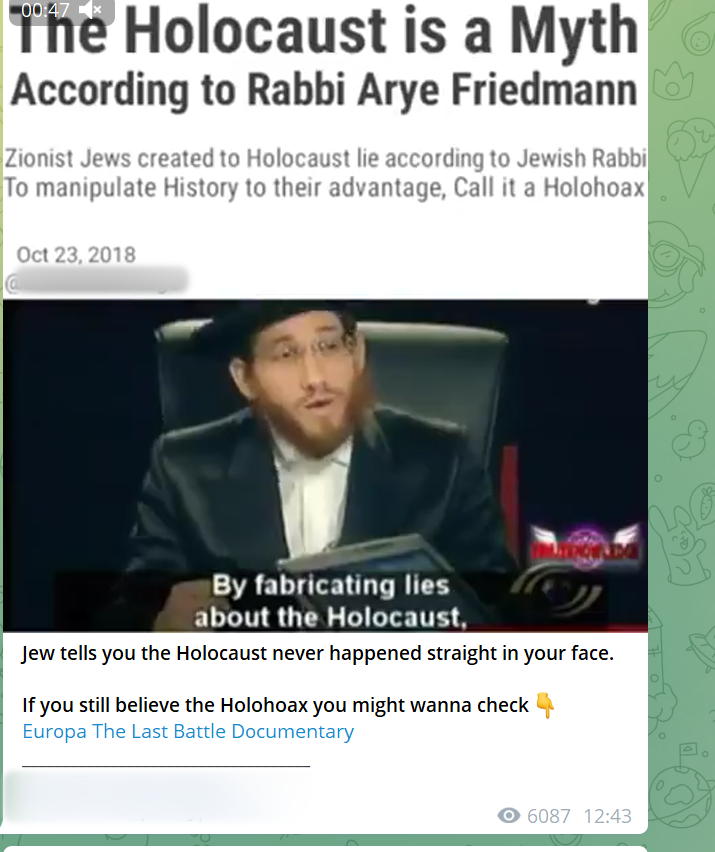 The link to the antisemitic documentary “Europa: The Last Battle,” a 12-hour film that among other claims asserts that Jews created communism with a goal of “total world domination,” has been shared multiple times in the chat, sometimes multiple times per day.

Other posts blame Jewish people for advancing LGBTQ rights, rights of racial minorities, or other causes associated with the progressive left. These posts also had little to do with the pandemic, and it is clear the group was being used as an umbrella for numerous extremist causes.

Antisemitism at the root

Conspiracy movements often incline towards antisemitism. “Jew-hatred has such deep roots within conspiracy ideologies that antisemitic tropes are rarely far removed from a diverse array of conspiratorial notions, including many surrounding COVID-19,” the Hope Not Hate report reads. “Indeed, such tropes pervade the genre to the extent that, for some, the role of the supposed Jewish conspirators is implicitly understood and does not need to be identified by name […] Many individuals may ignorantly regurgitate antisemitic tropes unaware that they are racist, or turn a blind eye and deny such charges as a smear.”

Moderation on Telegram is notoriously scant; the platform’s relative openness has made it attractive to those who have been banned from other social media platforms. Antisemitic conspiracy groups and QAnon influencers alike have been able to build large followings on the platform with very little oversight.

Although this group has a stated purpose to be a forum to talk about pandemic conspiracy theories, it rapidly became a place to discuss other kinds of conspiracies as well. It appears in the case of this group in particular, antisemitism has become far more open.

Since the beginning of the coronavirus pandemic, comparisons have been made in the media between the current outbreak and the 1918 Spanish Flu. By the time it had run its course, the 1918 flu was responsible for 20 to 50 million deaths around the...