An Obituary for the Most Consequential Social Media Account in History 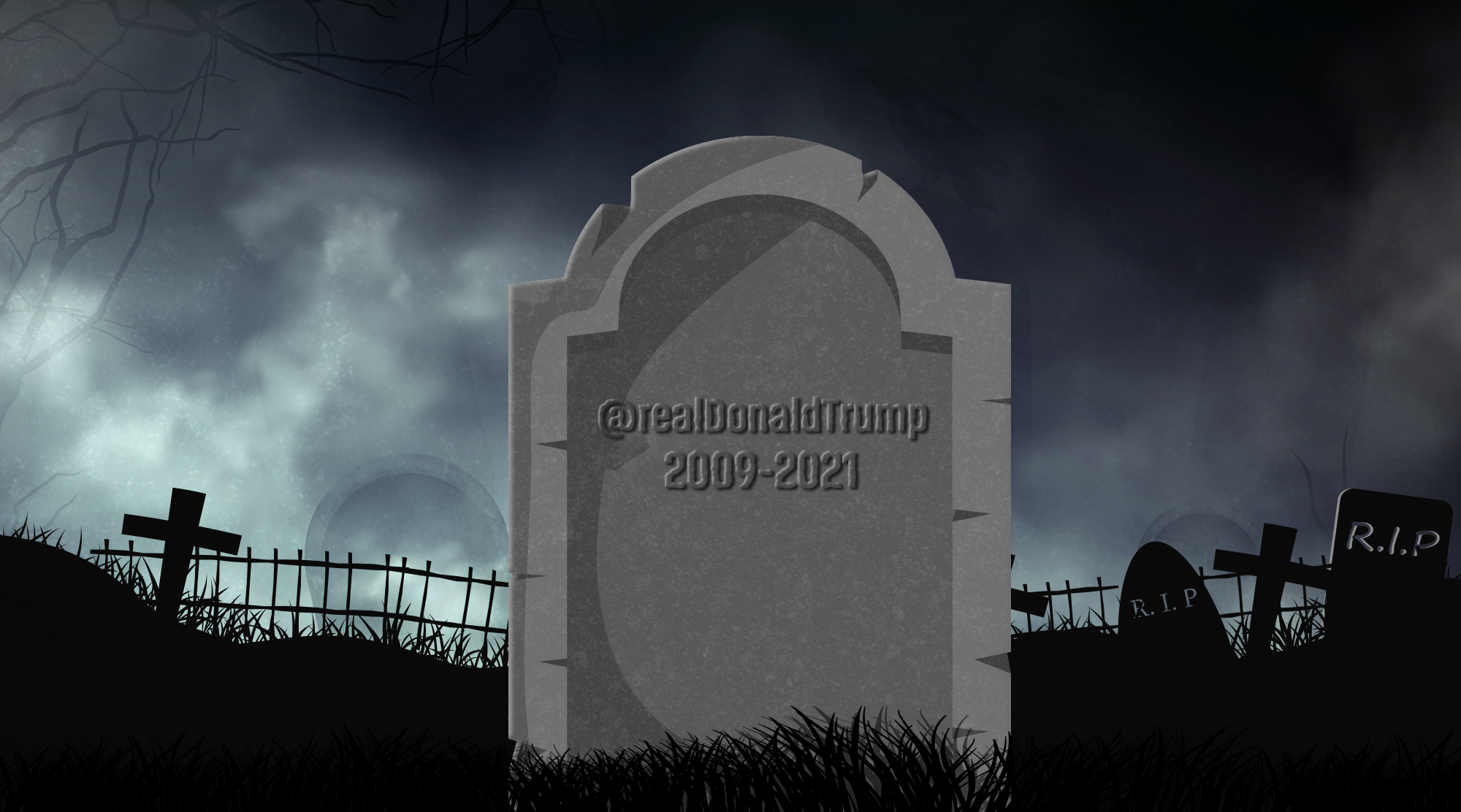 So it’s RIP @realDonaldTrump. Late last week, Twitter finally announced the permanent suspension of what is surely the most consequential social media account in history. In the end, it was Wednesday’s attempted coup that turned out to be the final straw for the man who used the platform to post his way to the presidency.

News of the ban was followed both by celebrations and recriminations, drawn along predictable lines. But one interesting feature of the response has been the toasting of Trump’s aptitude as a poster: overwhelmingly by people who do not share his politics in any sense. (See this representative thread for one example of many that I have seen).

Trump’s profile as a reality TV star, crude effectiveness as a rhetorician, and seemingly intuitive understanding of social media as a form, allowed him to ride a fantastical conspiracy theory about Barack Obama’s birth certificate all the way to the White House; a petty fascist who has brought out into the open the racist paranoia polite American society has long-since sought to repress; the preening, gurning figurehead of a Republican party who has increasingly constituted a genuine threat to American democracy.

And yet, it is still possible to appreciate, on a purely aesthetic level, the brilliance of a man tweeting something like: “I would like to extend my best wishes to all, even the haters and losers, on this special date, September 11.” Or “The Coca Cola company is not happy with me—that’s okay, I’ll still keep drinking that garbage.” Or deciding, for some reason, to post a long series of tweets offering unsolicited romantic advice to Robert Pattinson. Even Trump’s final tweet, issued amid a genuine political crisis, was a masterclass in deadpan; pitch-perfect and wildly funny: “To all of those who have asked, I will not be going to the Inauguration on January 20th.” (Or just the fact that the guy’s handle was ‘@realDonaldTrump’ – the whole time he was president).

How ought we to understand this phenomenon? What is it about Trump, or about social media, that has seen him at once, and by the same people, so widely reviled as the president, yet so celebrated as a poster?

The first thing to note is that no poster exists in a vacuum. As with any art, “posting” cannot happen independently of its medium. Just as Michelangelo’s David is predicated on the art of carving in marble, or the music of John Coltrane on the invention of the saxophone, so Trump could never have posted his way to the presidency using any platform other than Twitter.

Twitter functions almost uniquely—in terms of both its culture and its design—to play to Trump’s talents. As the philosopher Natalie Ashton has pointed out, compared to other social networks, Twitter more effectively facilitates “epistemic friction.” That is to say, it exposes users to views heterogeneous to either their own, or those of their peers. This is both because it is possible for users to follow someone without that person following them back, and also because the gamified way that Twitter works means your timeline is likely to be flooded, intermittently, with people quote-tweeting some idiotic take to dunk on it. Ashton argues that epistemic friction is a good thing, since it means the platform can be used to elevate marginalized voices. But it also, of course, means that users have been more likely to be exposed to the views of, well, Donald Trump.

In a recent substack post about the second-most notable thing to happen on Twitter this year—the fallout from a man in Seattle refusing to show his daughter how to open a can of beans—the digital culture writer Ryan Broderick described the platform as a sort of massive message board, in its own way just as insular and toxic as the sort of place you might have spent ages posting in the early 00s, but whose user base happens to be made up of journalists, politicians, and celebrities. Amid this milieu, Trump was able to position himself, through both nasty gossip and political provocation, as the ultimate troll: social media’s very own Dick Dastardly.

There is nothing funny about the downward-punching force of Trump’s actual policies. But on Twitter, he was funny in part because he managed to channel a certain ressentiment, shared by his supporters but by no means exclusive to them, by symbolically punching up at the political and media establishment. (To wit: “I JUST GOT IMPEACHED FOR MAKING A PERFECT PHONE CALL!” or one of my personal favorites, his savaging of John Bolton as “A sullen, dull and quiet guy, he added nothing to National Security except “Gee, let’s go to war!”) This is why Trump needed Twitter. On any other platform (on Facebook, for instance, where he could limit the scope of his broadcasts to his admirers, or on one of those “free speech apps” where he could rule the roost) Trump would not be able to position himself in this way, and his appeal would greatly diminish as a result.

Trump is also vulnerable in a way establishment politicians typically are not: past tweets evidence a man given to embarrassing himself in some genuinely dunderheaded ways, while his propensity for doing things like repeatedly hiring Rudy Giuliani as his legal representative bespeaks someone given to getting involved in what one might describe as hair-brained schemes (the legal equivalent of the Coyote continually trying to catch the Roadrunner using Acme products). On Twitter, there is a cartoonishness to Trump—a cartoonishness that both complements and conceals the fact that he has held (still holds) the presidency.

Trump is not, however, the only user given to posting in this style. The outgoing president also exists as part of a more general cultural context in which other users are able to post things that are recognizably “Trumpian”.

Most prominent amongst those other posters is the legendary Twitter user @dril, whose masterful comic persona has been compared to Trump so frequently that a 2016 New York Magazine article even argued Trump should choose Dril as his running mate. It is often surprising (see Trump’s “losers and haters” or Coca-Cola tweets) to realize that a tweet one had long-assumed should be attributed to Dril was in fact authored by Trump. In the wake of Trump’s permanent suspension, I would be unsurprised if future historians are one day fooled into believing that Trump once tweeted his disdain towards people who tell him not to French kiss his ferrets at work or decided to illuminate the nation as to whether or not they’re allowed to fuck the flag at the Betsy Ross museum. (Incidentally, Dril is also responsible for one of the all-time great tweets about Trump).

More recently, the comedian James Austin Johnson has helped further supplement Trump lore by perfecting an impression of Trump’s rambling rhetorical style so brilliantly that I now find it hard to remember that the 45th President of the United States did not in fact accuse Professor Oak from Pokémon of being “not with our people,” or describe Weird Al Yankovic as having “more money than sin.”

Trump is admired, even by his critics, for his posting. But equally, the people who admire him would typically acknowledge that there is nothing at all virtuous about posting on social media. As a philosopher with certain Aristotelian inclinations, I have long harbored ambitions to devise a sort of “virtue ethics for the internet age”—an account of the excellences associated with posting on social media. But by almost the same token, I suspect that there may simply not be one: that in fact the way that social media users are incentivized to behave is uncomplicatedly bad and wrong, and not just this, that it is bad and wrong in such an unstable and chaotic way that no particular philosophical light can be shed on it.

It is the tendency of social media to reduce human interaction to a bare, brute, quantitative form: to debase all vestiges of sentiment and solidarity into likes and retweets. A post is good to the extent that it is shared without comment: it is bad to the extent that people, disproportionately, feel obliged to add their dissent. Having more replies than shares is a disaster; following more people than followers is embarrassing; the worst thing you can get a reputation for is talking to people. Experiencing human interaction only through social media would be like only making art for money. Over time, one would lose the sense that what you are producing might actually mean, or be worth, anything in itself.

This way of understanding the meaning and significance of our interactions with one another has resulted in the sort of generalized detachment encapsulated by the you love/hate to see it meme. On social media, we approach politics as a slightly bored spectator might view a sports game.

The advent of the Trump style is proof that one need not be admired as a poster only because one happens to make good posts. People also value others’ posts when they provide them with the raw material for their own—and of course this material is almost incalculably more valuable when it is bad as opposed to good. Posters like Trump—the most powerful man in the world, who continually says dumb and insane things—thus serve a valuable community role. Indeed, Trump’s Twitter account ended up producing an entire cottage industry around his posts, of both pro- and anti-Trump voices swimming in his wake.

But, of course, this ended up meaning that it was often basically impossible to escape Trump. People made it their (literal) business to constantly dunk on him, which far from acting as a form of scrutiny ended up making it possible for him to post his way to the White House. It’s also almost certainly why Twitter ended up taking so long to ban him: Trump needed Twitter, but Twitter also needed Trump. Twitter is perhaps unique in that almost all of its users openly hate using it; hating Twitter is built into Twitter’s culture. But when the most powerful man in the world is using it as his mouthpiece, this is a prima facie good reason to remain there. It will be interesting to see how Twitter copes with the loss of its most prominent user. Perhaps Trump will simply use a different social media page, and all his posts will end up screen grabbed on the TL.

In a party conference speech lasting just over one and a half hours, Labour leader Keir Starmer announced on Wednesday that he would tackle crime through a strengthened police force and increased surveillance, asserting that there was a clear link...