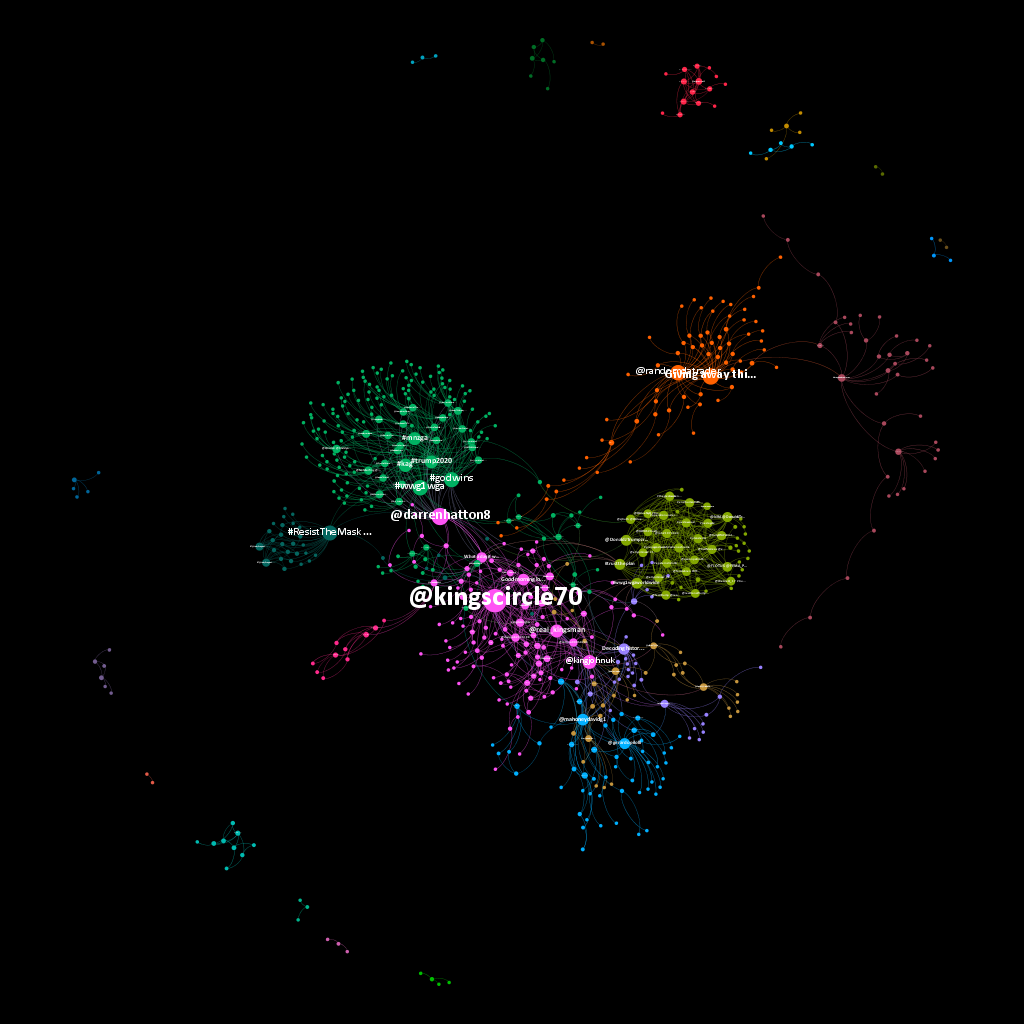 A bizarre story about a man laying claim to the throne of England is seeing a surge in popularity amongst conspiracy theorists this week, particularly with the fringe right-wing group QAnon. A man by the name of Joseph Gregory Hallett (referred to by some as King John III), who originally submitted a 34-page affidavit as his Statement of Claim to British Common Law Courts in April, claims that the ‘illegitimate conception of King George V’ left a bloodline of ‘flat lie royals’ on the throne since 1840. Hallett believes the throne is now rightfully his.

According to Hallett, the British Royal Family was forced to sell their ‘breeding rights’ to the Rothschild family in the wake of the Battle of Waterloo to save themselves from bankruptcy and that the Rothschilds retained these rights up until 2019. Hallett’s theory revolves around a baseless claim that King George V was not actually the son of Edward VII but an illegitimate son of Tsar Alexander III of Russia, therefore breaking the royal lineage. Hallett adds that the Royal Family now has until July 30th to respond to his claim and that failure to do so would result in ‘passive acquiescence’ and ultimately abdication.

Though Hallett has been preaching his 'message' for years, it caught the attention of QAnon in May 2020 and was amplified as a result. The most recent popularity surge can in part be explained by a series of videos produced by Digital Warrior Productions (whose associated Twitter account is entirely dedicated to QAnon conspiracies) including a 29-minute film entitled The Hidden King. In The Hidden King, Hallett, interviewed by David G. Mahoney, delves into how a complex set of numerological and gematric deductions somehow led him to the conclusion that he was the rightful king of England and beyond. In case this story wasn’t enough of a Dan Brown copyright infringement lawsuit in the making, the Digital Warrior Productions crew decided to take their ‘investigations’ to a cave in Portugal—where Hallett allegedly once lived for a total of 100 days—to track down a ‘treasure' he left behind. To make things even weirder, a 2014 blog post claimed that Hallett had in fact been abducted and murdered in June of that year after surviving no less than 12 previous assassination attempts. 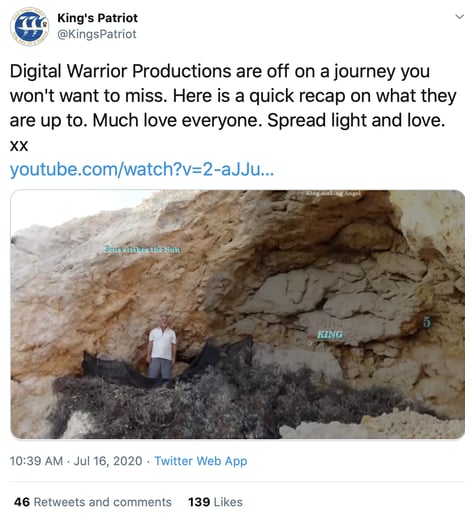 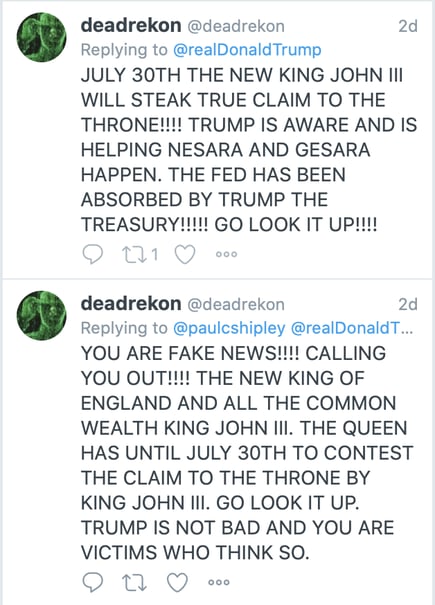 Not all QAnon followers, however, seem convinced. Some are quickly calling out Hallett as a fake, while some are claiming he may actually be the first horseman of the apocalypse. Others are pointing out the resemblance between symbols used by Hallett and those of the SS, as well as the fact that a producer credited in The Hidden King has ties to Ghislaine Maxwell. 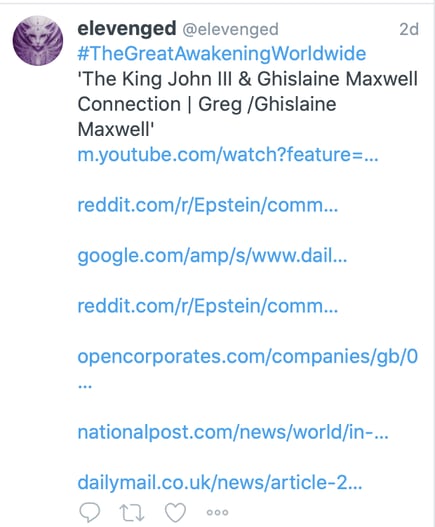 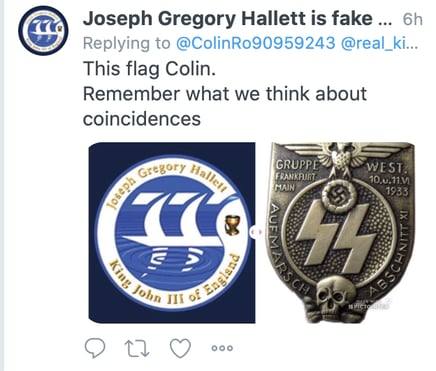 The story takes an even darker turn with Hallett’s publication history, which consists of a series of 'non-fiction' conspiracy books that put forth theories such as Hitler being a British agent as well as various cases of paedophilia cover-ups in New Zealand government. Hallett’s works have in the past piqued the interest of known right-wing conspiracy websites. 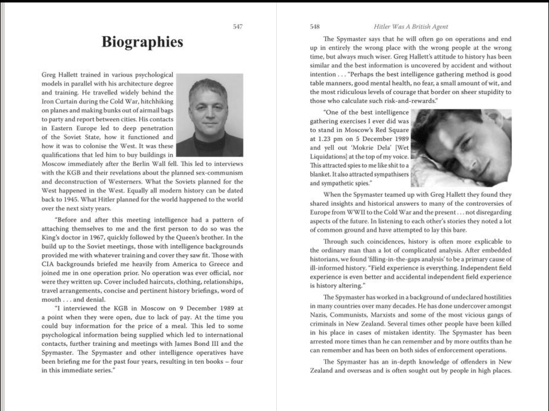 How Hallett managed to attract the attention of the QAnon world remained unclear, but his promises of an impending global reset timed to coincide with his ascension to the throne may have captured the imagination of those espousing theories surrounding Nesara/Gesara and Aranga—popular QAnon beliefs about imminent worldwide economic reforms and debt forgiveness, which are to be supposedly introduced by President Donald Trump.

We conducted a network analysis to see how Hallett courts the QAnon community on Twitter. The first graph shows “hashtag co-occurrence” - when two or more hashtags are used together in one tweet. To feed this graph, we tested Aranga due to its commonalities between Q and Hallett’s communities. The graph is dominated by #wwg1wga (when we go one, we go all - a popular QAnon rallying cry); the next most popular node, however,  is #arangaworld, the name of Hallett’s Facebook page and as-yet dormant domain that contains a glossy introduction video for what’s to come. What that is, incidentally, is “the awakening” - which leads to another prominent hashtag that is shared: #thegreatawakening. For QAnon followers, this is the national and worldwide paradigm shift in which the ‘deep-state’ is eliminated and hoarded prosperity and wealth is shared (this also ties in with Nesara/Gesara). 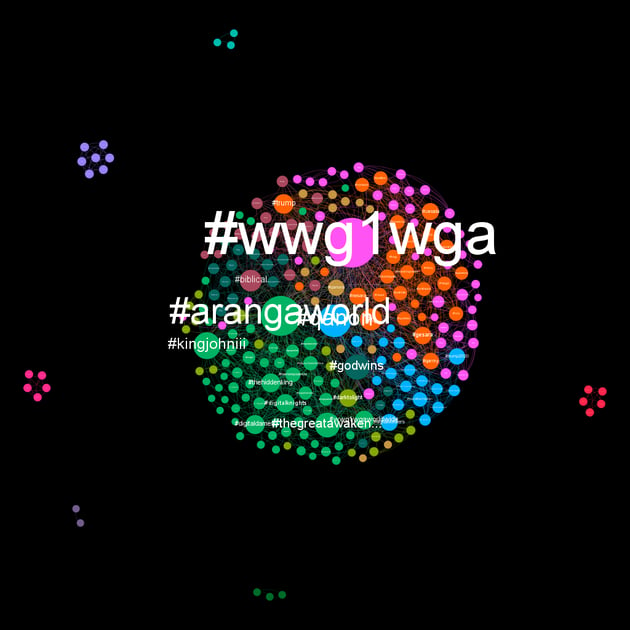 Next, we pulled a full Twitter network analysis for “King John III” and “ArAngA” to see what conversations were happening. As this story is a thread within a niche of a larger conspiracy theory, we let the pull run overnight to capture a good picture of the community in situ. After running our analysis, we found six main communities from the 700 nodes and 1296 edges. 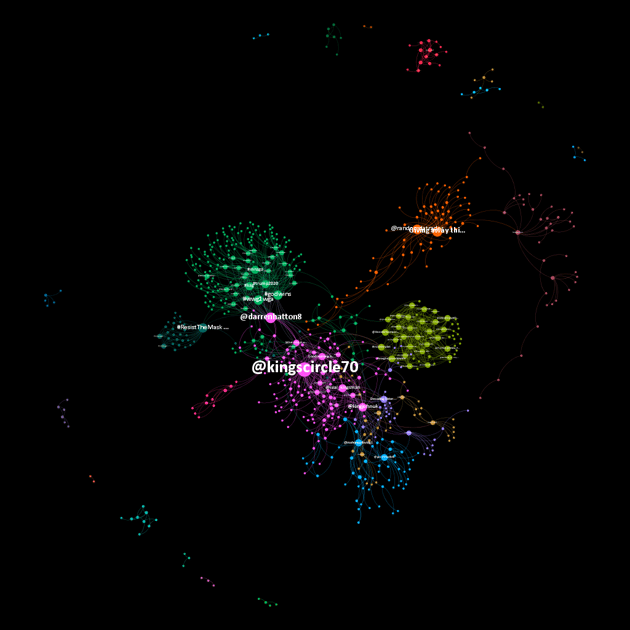 The large pink community is the devoted following of Hallett, including prominent accounts promoting his claim to the throne such as Real_Kingsman, Kingscircle09, and Hallett’s own account, kingjohnuk. The blue cluster linking from that is Dave Mahoney of Digital Warrior Productions and their promotion of their videos with Hallett and their Uncharted-meets-Benidorm adventures in Portugal.

The next clusters show a strong link to QAnon and other conspiracy groups. The upper green cluster is the particularly religious section of QAnon (#godwins features prominently alongside #wwg1wga). QAnon power-tweeter Santa Surfing features prominently here and the link between Hallett and this group comes from the Nesara/Gesara courting. The lighter green cluster to the right is the real meat of QAnon; #adrenochrome, #plandemic, and #trusttheplan all appear heavily here. The dark green/blue area to the left is a collection of users who sit comfortably in the anti-vaxx/QAnon venn diagram. The most popular tweet here simply reads:

This tweet, with its barrage of hashtags, appears to borrow from and modify the “Trump Train” technique of boosting community numbers. Rather than working to boost follower counts, this hashtag-heavy tweet unites communities and introduces antivaxxers to QAnon followers to ArAngA followers etc.

Adorably, the large orange cluster represents a giveaway of a “bunny” Aranga dragon from the game Dragon Adventures.

Though only a small initial sample, the network here shows that Hallett has nestled himself well within Twitter’s QAnon conversations and power-users. The convergence between the two groups is exemplified in the tweet below. Numerology combines with pro-Trump messaging to legitimise Hallett’s claims. 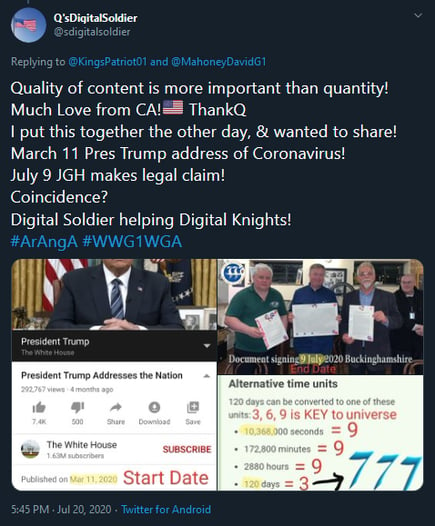 There is much more we could pour into this story, including bizarre esoteric biblical readings, eschatological disagreements, and Hallett’s publication war with New Zealand. This tale is one strange rabbit hole built on another. However, it is his piggybacking alliance with QAnon and folding into their narrative that may be the most bizarre development yet. Whether this leads to wider notoriety remains to be seen. We will just have to wait until July 30 to see whether his Digital Knights are backing a just cause.