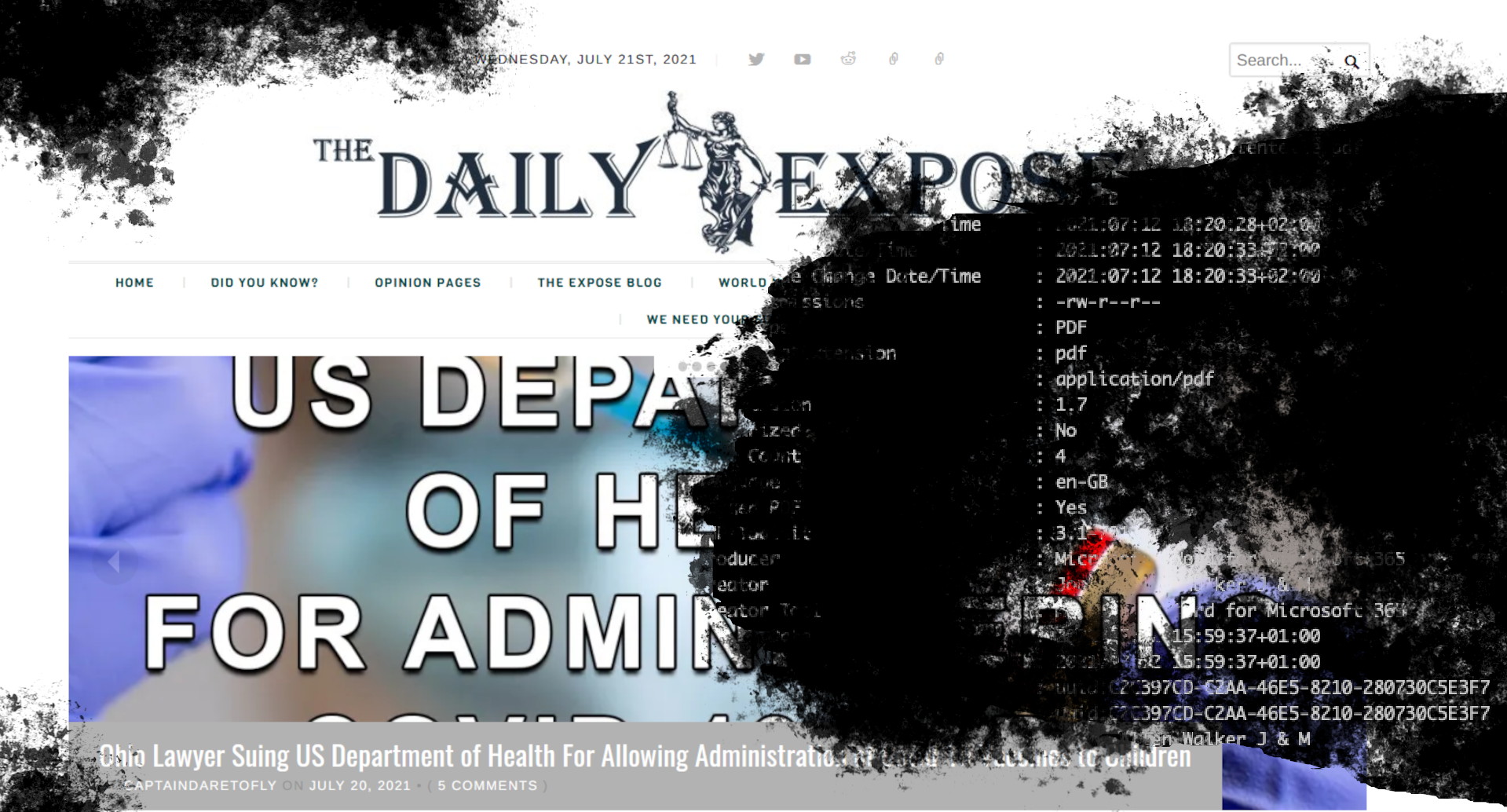 
The Daily Expose is a U.K.-focused conspiracy site created in November of last year, and since its establishment, it has promoted a standard portfolio of COVID-denialist, anti-vaxxer, and Great Reset myths framed as breaking news. It has grown to be extremely influential in the alt-news ecosystem, with its articles getting thousands of shares per day on Telegram, Twitter, and other private chat channels. Although the website is less than a year old, it has grown by more than 300,000 page views per month since January, with the last data available suggesting it had more than 1.5 million total cumulative views.

Unusually for a conspiracy site, The Daily Expose produces original content several times per day, rather than resharing memes or articles from elsewhere. On its “about” page, it claims to use only official documents from government or scientific sources to write its stories. The writers often distort or misinterpret the information within the snapshots of the documents they use to push a number of conspiratorial narratives. For instance, The Daily Expose has claimed that vaccines were approved without any sort of safety checks and that vaccines are causing mass death.

The writers and contributors don’t request interviews with scientists, government officials, or other qualified experts to make sure they’re interpreting these documents correctly. Nor do they give the right of reply to any of the institutions or figures they are reporting on, which is an expected journalistic practice. The Daily Expose has fielded interviews with fringe figures, for instance, Mike Yeadon, but the interviews take the form of a transcript of their opinions, which are neither questioned nor fact checked. Because the writer or writers have been anonymous to this point, they have not been able to be held accountable for their content, nor do they have wider connections to any journalists who can vouch for their work. All of these factors make the website an extremely dangerous platform for misinformation, as it carries the weight of official documents without the transparency or accountability of reputable science or journalism.

The Daily Expose’s first posts are from November 2020. In March, Twitter suspended its main account, but almost immediately The Daily Expose was able to make a succession of alt accounts to get around the ban. At least five accounts were created at various stages after the initial ban. After the second ban, The Daily Expose made sure to run pairs of accounts so that individual account bans wouldn’t result in a complete loss of followers or lack of ability to tweet. The ban-evading accounts would always point followers to the paired account, accusing Twitter of censorship. Generally, accounts were set up with different phone numbers and email accounts from different providers, though they included similar bios, images, and headers, while also all linking to The Daily Expose website. Presently, two of their alts remain operational and have 18k and 14k followers respectively. A full 65 percent of their referrals come from Twitter.

The articles are all anonymous, signed online with a “Daily Expose” byline, save for a regular column written by Emily Smith of Leeds, who uses the WordPress handle captaindaretofly, and other occasional one-time contributors. On her other social media, Smith does not post anonymously.

It is not clear that Smith knows who runs the website. On a podcast episode with two other conspiracy content creators, Denty and Shaz, she says that she contributes articles voluntarily rather than for money. Smith did not respond to a request for comment.

It is unclear exactly how many contributors The Daily Expose has, or whether it has any permanent staff beyond Allen-Walker. Several tweets from its account suggest that the operation has multiple people involved.

The finances of the operation are unclear. It has run monthly fundraising efforts since at least February from its homepage, Twitter, and Telegram. There are a few other sporadic attempts at Crowdfunding on other platforms, with one campaign on Buy Me A Coffee yielding over £3600 in donations, but another on GoFundMe registering zero. No details were found for businesses registered with Allen-Walker’s information on Companies House.

When our reporters reached out for comment, Allen-Walker did not respond.

Clicking on The Daily Expose’s byline brings up the author page for the owner of the WordPress account, jonnywalkersb. An archive shows that jonnywalkersb.wordpress.com redirects to dailyexpose.co.uk.

Archived versions of the page reveal that it used to be the homepage for J&M Mechanical and Fabrication LTD in Scunthorpe, Lincolnshire.

Early whois records show that jandmltd.co.uk was registered by Jonathan Allen-Walker of Gainsborough before the details were later hidden from the public.

Cached data on Google suggests that the jonnywalkersb WordPress was used to run the J&M homepage. A phone number registered to The Daily Expose matches the number saved in the cached data for J&M.

Jonny Allen-Walker’s Facebook page showed an ad for the business, asking his friends to contact him for a job. 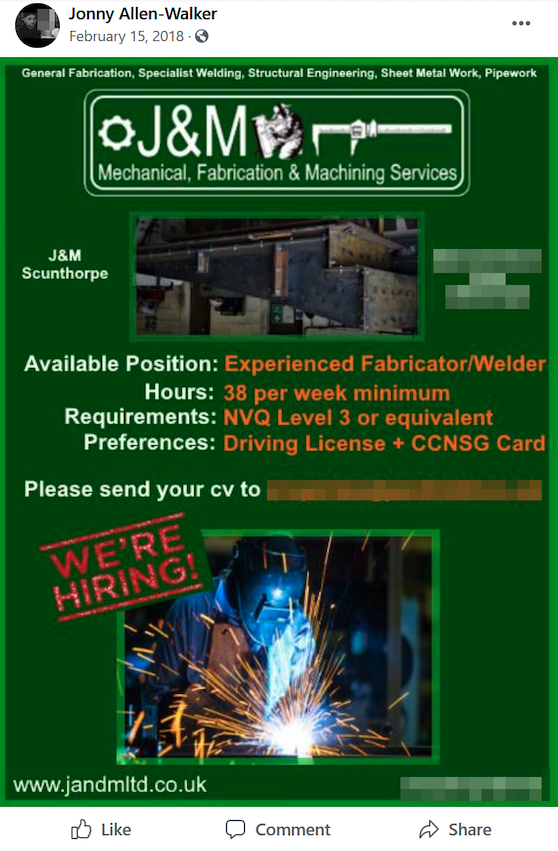 Furthermore, on The Daily Expose’s site, a PDF is available with metadata showing that it was created by Jonny Allen-Walker and J&M. An archived early version of the site from November 2020 shows a weather app locally registered to Scunthorpe. 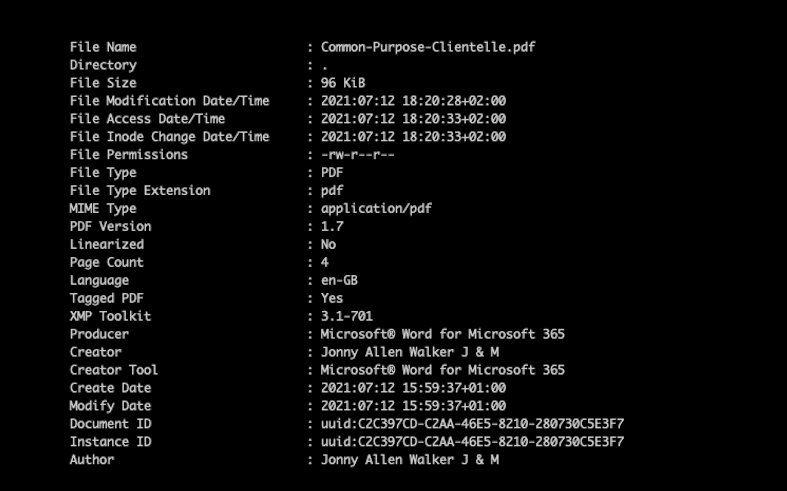 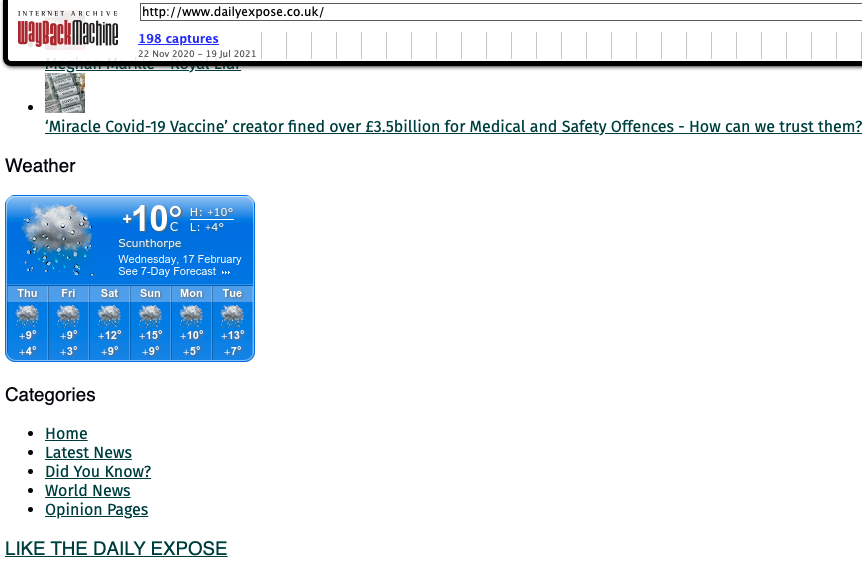 The Daily Expose has been one of the most influential platforms for medical misinformation in the U.K., even though it appeared only at the end of 2020. Many who work in tracking disinformation have encountered it multiple times over the past nine months, and continue to encounter it almost daily. Nearly every influential figure in the lockdown-skeptic and anti-COVID-vax movements have either used it as a platform to broadcast their own points of view or to persuade others that officials are “hiding the truth” from the public. It carries the gloss of truth without the substance. In naming its author, we at Logically hope to allow for Allen-Walker to receive the same scrutiny that other media organizations must face, rather than allowing him to continue to make false allegations anonymously.